I was at PCV the other day when a neighbor  pointed out a squirrel whose left cheek was badly swollen. It wanted to eat, so I began feeding it along with the other squirrels, all the while keeping an eye out for my friend  Spunky, whom I hadn't seen yet that day. I was a bit concerned because while many squirrels tend not to make a daily appearance, Spunky was always out and about. 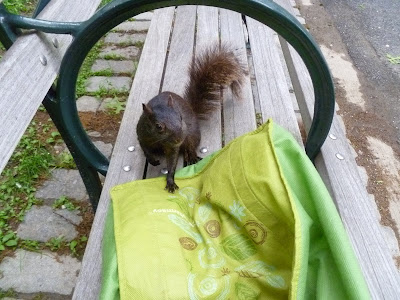 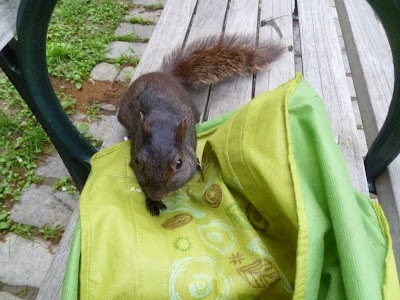 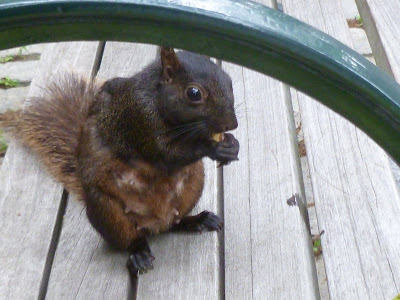 Of course, how could I have missed it? Spunky was nursing babies. I should have noticed.

How stupid of me not to have recognized her, yet that terrible swelling changed her face so much that I did not. It blew up out of the blue: one day she was fine and two days later she looked like this: 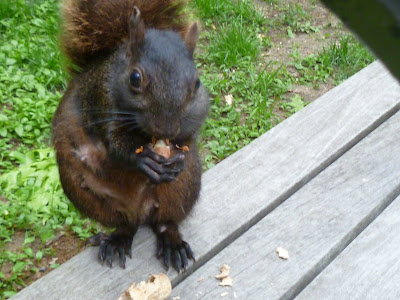 Bernie was nervous because  it had blown up so rapidly, so he came over the next day and performed surgery on her, in order to drain it. What he did was amazing, although I must admit that I couldn't watch much, as it made me feel faint. Unfortunately, my camera had just run out of gas, so there was no imperative to take pictures.
Bernie let Spunky approach him on the bench, as I knew she would, since she is  so at ease with people. He fed her for a while - some avocado and various nuts - and then suddenly he was holding her. As I said, no camera, no pictures of what ensued, only a description. He slit her cheek with a razor blade in such a way to ensure that it did not touch an artery, which would bring the poison back into her body, but rather a vein, which would bring it out.
And out it did come! I looked over once and saw a long stream of  liquid pouring out of the squirrel. I went back next day to take a picture of the unbelievable amount of gunk that came out of that squirrel: large balls of a hard, waxy substance that had to be pus, mixed with red blood.
Bad Gunky from Spunky 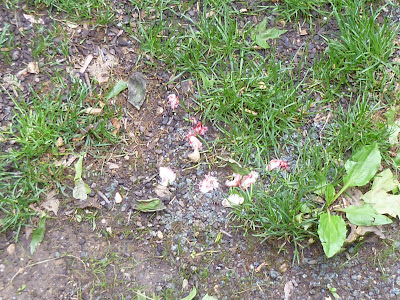 Spunky was being quiet and cooperative. Bernie held her in such a way that she had no choice. When he finally released her she tore for the nearest tree like a bat out of hell!  She disappeared up the tree, and that was the last to be seen of Spunky that day.

An option would have been to take her to the vet's for a dose of antibiotics, but it was already late in the day, and we didn't want to take her away from her babies for long, as they could be killed without a watchful mother around.

I went back the next day, not knowing what to expect. Would Spunky now be afraid of us? I sat on the bench and waited for almost an hour for her to appear. I was starting to get worried when the same neighbor from the other day approached, and told me that he'd seen Spunky that morning, and had noticed that her swelling had gone down significantly. I was relieved to hear that. I told him about Spunky's surgery and he said he'd keep a special eye on her.

A short while later Spunky made her appearance. She hopped right up on the bench next to me. Nothing had changed! 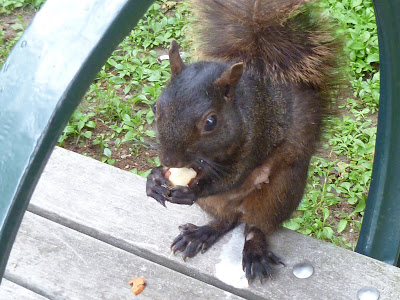 She was still friendly and had no fear of me. I think she knows that we helped her. Spunky is smarter than the average bear.

Her cheek was still a little bit swollen, but looked so much better, and she must have felt better. I think Bernie saved her life with his amazing surgical skills and knowledge. He said that squirrels are prone to getting this infection, and that he has helped them get over it many times.

I am so grateful that Spunky is better and can continue to tend to her babies. She may need another drain, and maybe some antibiotics, so we'll be watching her carefully for the next couple of days.