Orange And the New Black 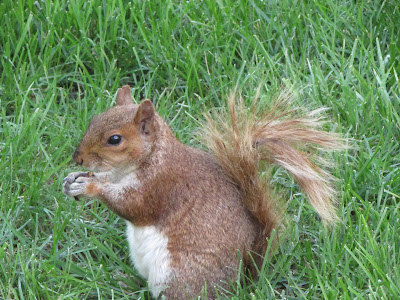 This week I'm overjoyed to have Black back! 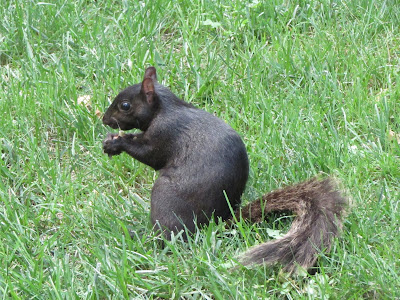 That is, a somewhat modified Black -- a new Black if you will.  That characteristic "V" on her back, by which I knew her, has disappeared.  But just as squirrel tails are always changing colors, their fur can change too. Squirrel "looks" go in and out of fashion, being as changeable as the weather and the seasons. 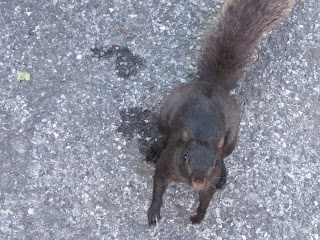 But there's so much that's the same -- her familiarity with me for one thing, and the way she races over when I enter the park, and then follows me around until I leave, and the way she gets so excited that she practically dances around me. That's how I know her.

Her boundless energy, her intense personality, her antics -- all these characteristics are still there in the new Black.

So they've come back, but where have they been? Squirrels don't hibernate in winter, but I'm wondering if they've been going into some sort of semi-hibernation state during the hot days of summer? Maybe those "summer vacations" will become one of the ways that squirrels adapt to climate change. I actually think they deal with the cold better than with the hot weather. They put on those heavy winter coats and the little ear muffs and mittens when the cold arrives, but they have no similar defenses against the heat, and are stuck in their fur coats, which, while not as heavy as their winter coats, still have to feel pretty hot.
﻿﻿
Posted by Admin at 5:13 PM No comments: Links to this post

After being gone for over a week, she sauntered over as if just back from summer vacation. But where had she been? And why was she gone for so long? Oh, the never-ending mystery of squirrels! She seems a bit worse for the wear, maybe a little disoriented. Like, how did I get back in THIS world?

I've had several people tell me that the squirrels in Peter Cooper and Stuyvesant Town seem confused and disoriented. I'm wondering if it could be due to the heat and possibly dehydration.  While most birds and carnivorous animals get their water from food, vegan squirrels don't get it from peanuts, so I've been giving them grapes and small chunks of fresh coconut, which they seem to like. 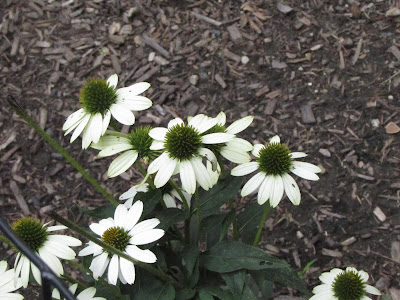 Posted by Admin at 12:23 PM No comments: Links to this post