And then there were none?

It seems like squirrels have been disappearing. Just looking back at my  mid-July post, when there were so many around, it's now an empty landscape by comparison. I can't figure out what's going on. They made it through the harsh winter (with my help, I like to think), and now that it's finally nice weather, there are not many around to enjoy it.

This is the "other mother" who has now also disappeared in addition to the orange mother. She's the other squirrel that I'd grown fond of over the winter. She was pregnant or nursing at the time, and would go crazy if she missed me for a day and missed a meal. She was a little terror. She'd tear holes in my bags until I taught her not to.  And she'd be constantly grabbing nuts and burying them for later. She was very intelligent, and also very aggressive, but she paid attention and learned, and we bonded. I'm always especially aware of the needs of mothers and the mother squirrels seem to respond to that with appreciation.


But now she hasn't shown up for a couple of days, and I'm saddened by the thought that something has happened to her. First I lost the orange queen and now the black queen?

There have been rumors of squirrels being poisoned. At first I rejected the idea because all "my" squirrels were doing well. But I was told that someone had actually brought a few dead squirrels to a vet and had them autopsied, and that poison was found.
I tend not to think management would have anything to do with disappearing squirrels, and I've spoken to a few residents who agree, saying that they are quite transparent about what goes on around there. That's good to know. But it's scary to think that there might actually be residents who would poison the little creatures. There are quite a few people around here who dislike the squirrels, and do not like to see anyone feeding them. But would they go so far as to hurt squirrels? I find that hard to believe. And yet, in the space of two weeks it seems that I've lost two of my main squirrels!  A lot of the other squirrels seem to have gone missing as well.

I can't believe she's gone! She just wasn't there one day. Or the next day, or the next. I was about to celebrate her here on the blog as the Queen of the Oranges. This is the latest picture of her, where her tail was already changing from its silvery beauty into a more orangey color. But the last time I saw her (which I didn't have a chance to capture as I didn't have my camera), it was a truly bright orange -- proof positive that she was the progenitor of the resurgence of orange-tailed squirrels we've been blessed with this year.

Yes, this is the mother of all orange squirrels, I'm pretty sure of it. And now she's gone!
What could have happened to her? Well I've been extremely depressed by the thought that I may have killed her. The last time I saw her I threw a peanut at her and it hit her on the head. Right after that she disappeared up a tree. How hard could I have hit her? Well hard enough for me to be concerned enough to go looking for her the next day. And I did not find her.

Ever since I've known this squirrel, she's been sitting out there like a little lawn decoration, awaiting my arrival (I liked to think). So not seeing her there was a bad sign.

A friend told me that there was little chance that I had hurt her, as a peanut is very light. It's not like being hit with a rock! And I'm imagining that squirrels through the ages have probably been hit by nuts falling from trees. So my friend is probably right. But is it just a coincidence that she disappeared right after that?

Normally I remain detached from the ups and downs of squirrels. I'm just there to feed them, mainly during the hard days of winter when there's no other food to be found. But I have to admit that this one was different. I had become attached to her and actually became very depressed when she didn't show up, especially when I might have had something to do with it. :(

I'm still hoping that one of these days I'll go out to the park and she'll be there, waiting for me. 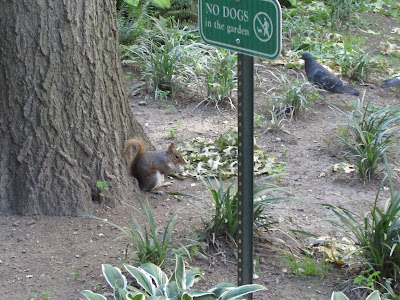 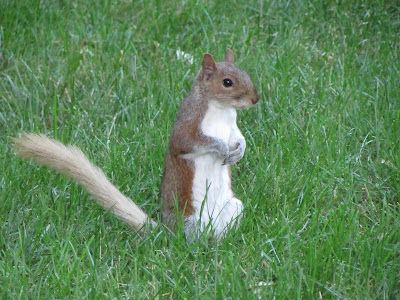 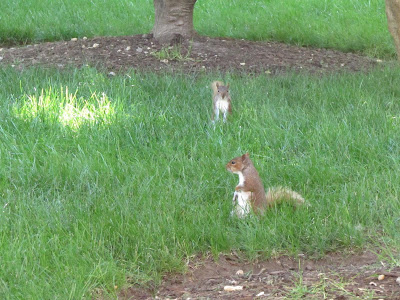 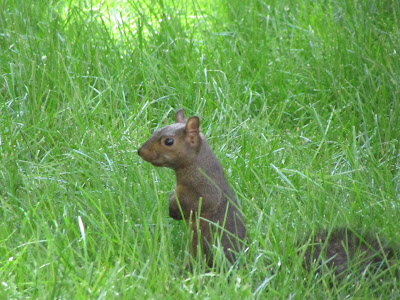