In the United States and the rest of the northern hemisphere, the first day of the summer season is the day of the year when the Sun is farthest north (on June 20th or 21st). This day is known as the Summer Solstice.

I had fun yesterday. First I saw Foxy -- the REAL Foxy. She grew larger, but she still has her wonderful butterscotch tail. We hadn't seen each other in a while, so we had fun together. Then I ran into Miss Pretty, who was having a grand time running with a pack through the early twilight. I tossed them all some cherries.

Then I saw that all the little black babies in the Baby Tree by the Guard's Gate have gotten much bigger and much bolder. They were actually descending from their secure kingdom of branches to have a look around at the rest of the world.

Then I went over to look for Spunky and there I found Bernie, sitting by the flagpole! All the squirrels had been fed and were now cavorting in the smaller trees over by the side of the building. They were in peaceful and playful moods. Spunky was there stretched out on a limb, and would not come down to me. That was a first -- she must have been VERY well fed! The others were more fun, especially the little ones.

Bernie discovered something strange. Someone had taken a bunch of branches and pushed them into a hole in one of the trees, and at the end of each branch was a gob of black mud, as if someone had tried to plant the branches in the hole! Very strange indeed. Nothing a squirrel could have done.

Then we walked all around the park, which was enchanting as the night descended and the fireflies began blinking at us everywhere. We discussed past squirrel adventures and the state of the world, and it was altogether a good time to be in the park, enjoying summer.
Posted by Admin at 12:40 PM No comments:

June is Busting Out All Over!

It's the beautiful month of June and the wild strawberries are growing all over Tubby's field! I love it over there because they rarely bother to mow, and the grass and clover grow high. And right now it's loaded with those tiny red morsels everywhere you step!

For a long time we did not see Tubby or any of the three brown juveniles that lived in the meadow. We wondered if something bad had happened to them. Or had there been a sudden exodus to Stuytown? But what squirrels in their right minds would leave the little bit of heaven that is Tubby's field for parts unknown? Could they have succumbed to (shiver) rat poison? Would anyone really wish ill to PCV's most beautiful squirrels? It seemed highly unlikely. It was just going to be another one of those squirrel mysteries. Bernie said that sometimes squirrels will disappear in summertime-- in sort of a hibernation in reverse!

So I was greatly relieved to spot a brownie over there the other day, and a fat little female to boot, which means more brown babies in the future. She could be the new Tubby, keeping the brown line alive!

Then yesterday I had a wonderful surprise -- the heat wave had finally dissipated and had been replaced by classic June days that have been cool and breezy, with big billowy clouds in crystalline blue skies. And guess what--our Ms. Tubby made her grand RE-appearance, along with TWO of her brown juvies! I also noticed that the little brown female I'd seen the other day was now in heat and being dogged by a gray male who was sniffing her relentlessly. Whatcha gonna do? I was just glad to see them all!

I also saw Foxy yesterday, whom I haven't seen in a while, since I've been spending most of my time feeding Spunky or Miss Pretty. Foxy is getting so big! And darker. Maybe it was Foxy's double.
Posted by Admin at 1:43 PM No comments:

How Spunky Got Her Groove Back

Spunky looks soooo much better now! She has fixed up a little bower of leaves on the branch just outside the hole where (I assume) her babies are, so she can stay comfortable and close.

She looked so raggedy the first week after she had her babies! Something was wrong with her rear left leg, so she walked lop sided and had trouble going up and down the tree. Now her fur is shining and her limp is not as pronounced. I have been faithfully feeding her each day, and she is much improved. All I have to do is go by her tree and call "Spunky!" and down she comes like a puppy!

What I love about Spunky is that the first thing she always does is look up at me with the most earnest expression on her face. Like she's asking: what's our relationship all about? 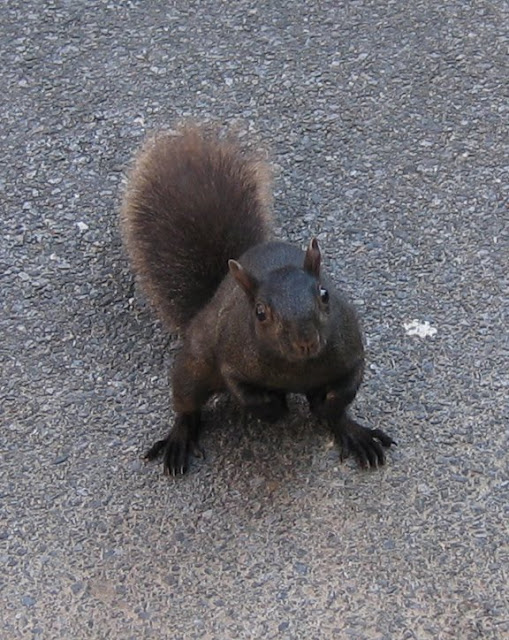 Once that's out of the way then it's back to business-- eating. But that first look is always her sweet greeting!

I also feed three little ones - one black and two gray - who have attached themselves to Spunky because I guess they realize that she's a meal ticket. Spunky is not their mama, but they somehow like staying near her. And they can see how friendly Spunky and I are. At first they were too shy and ran away when I threw then a nut, but now they are getting braver.

Miss Pretty, who lives over on the other side of the park, has also had her babies, and is none the worse for the wear. She looks healthy and is full of energy. She's a spoiled little squirrel who loves spending time with me even after she's eaten her fill. She seems to love interaction. She has unusual fur that is gray but spotted with a strawberry color, that matches her "strawberry blond" tail. And she has such a sweet face. Reminds me a lot of a sweet little squirrel that I once knew named Strawberry, who just disappeared one day.
Posted by Admin at 1:12 PM No comments: