I'm finding it necessary to issue a rretraction to my earlier post. A PCV guard stopped his car in front of me yesterday, as I sat on the bench in flagrante delicto, surrounded by squirrels, with an avocado in my hand. I had decided to risk going back to feed the squirrels after discovering that some of them were in trouble. It was a different guard this time.

Oh no, I thought, here comes another interrogation.  As I started gathering up my things, he asked me if I fed avocado to the squirrels. Being caught green-handed as it were, I had to admit that I did. As I awaited the next blow, I guess I looked surprised when he asked me to make sure that I cleaned up afterwards, and threw any remainders in the trash, because someone had complained about finding a piece of avocado somewhere. I recalled the  pet-owner who had complained to me a few weeks ago that his dog got sick after eating something from the ground that was not kosher. I had sympathized with the man but assured him that it was nothing I had left there, because I always clean up after the squirrels, and don't even put avocado in the trash, but pack it out of the park.

The guard nodded and seemed satisfied. As he started to take off, it was his turn to look surprised when I actually thanked him! He probably wondered what that was about, but I was grateful for what I considered a more thoughtful approach. And I absolutely agreed with what he was asking for. I'm always conscious of the fact that my little friends can make a mess, so I tend not to feed them on the benches when people are using them, and I always clean the benches off with a paper towel, and refrain from throwing food into the trash containers, which could possibly be retrieved and strewn around the grounds.

As I was saying, a man had approached me and told me that his pet dog got sick after eating something he'd found on the ground. That sounded to me like it might have been avocado, although it wasn't from me, because  I'm aware of the fact that avocado can poison dogs, and I'm very careful with it. Some people even believe that it's not good for squirrels, but I don't think that's the case. The squirrels I know do well with it, and most react to it like cats to catnip, going a little crazy for it. I believe they need some good fat once in a while, but usually reserve it for sick, injured and nursing squirrels, as it's quite expensive. And I'm careful not to give them either the pit or the skins, which could possibly cause problems. I usually feed it to them in little bites from a plastic spoon, and dispose of the rest when I return home.
﻿

The cameras that  are all over Peter Cooper Village and Stuyvesant Town that enable Management to watch your every move, have apparently not been particularly effective at reducing crime in those neighborhoods:

A recently published statistical study out of New York University says they do not deter it much, if at all, based on five years of evidence from Peter Cooper Village and Stuyvesant Town in Manhattan.


However, those ubiquitous camera eyes have been put to use for certain other purposes, making an idle cam look indeed like the devil's workshop. I'm referring to  the recent crackdowns on squirrel feeders. Last week I was informed that they have been watching me on camera, and that I have to stop feeding squirrels for the simple reason that "They don't like it" (referring to Management, not the squirrels).

It's funny that they didn't bother us throughout the winter, when we were saving the lives of many squirrels. The risk of a squirrel of freezing to death is much greater when it doesn't have enough calories to burn for heat and energy. There seems to be a myth going around that squirrels don't need to be fed, and that nature's bounty provides all they need. I wish that were true, but it's not the case at a place like PCV, which is a park, not a forest.  But now, like fair weather enemies, they are going after those who cared for the squirrels through the winter.

Although I guess the Almighty NSA already knows all about my squirrel feeding habit, it still makes me uncomfortable to know that my every move was being tracked when I'm hanging out in a park with a bunch of squirrels. It's odd isn't it, that the one who was always catching squirrels on camera, is now being caught on camera herself.
﻿

Saying goodbye to my beloved squirrels is tough, especially since they don't understand what I'm saying.


Isn't she lovely? Spunky has never looked so beautiful 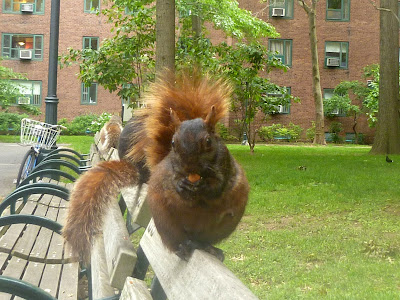 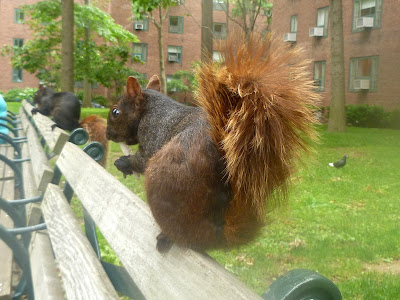 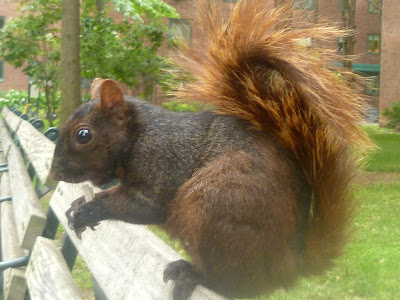 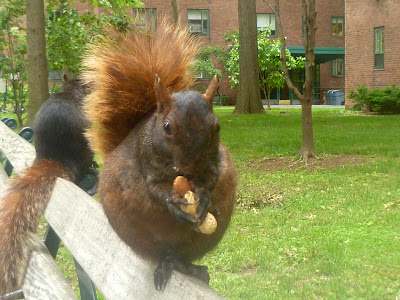 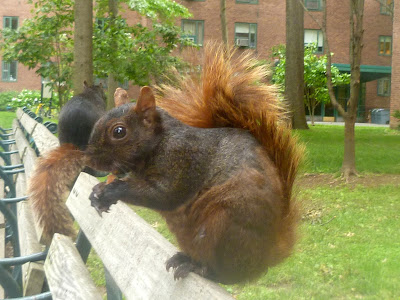 Gray Momma, not realizing that this is the last time we'll be hanging out together, lets me get up close and personal. 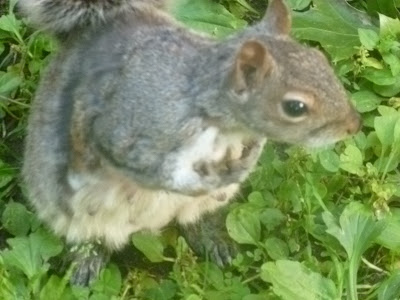 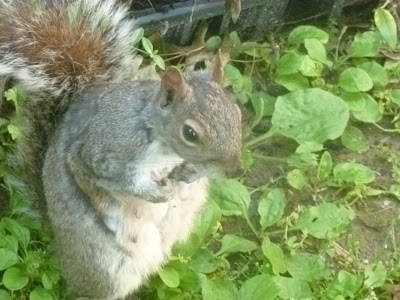 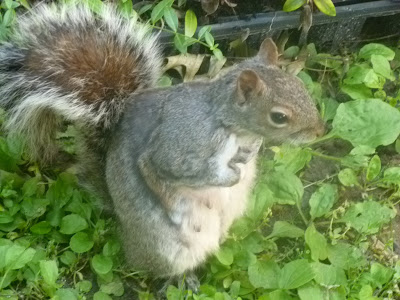 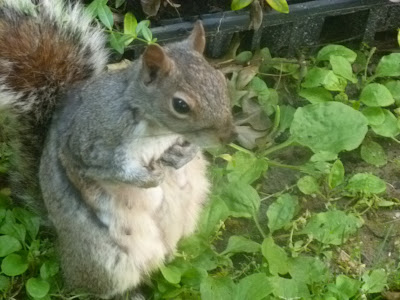 Baby Momma, barely a baby herself, needs help while she's feeding her brood 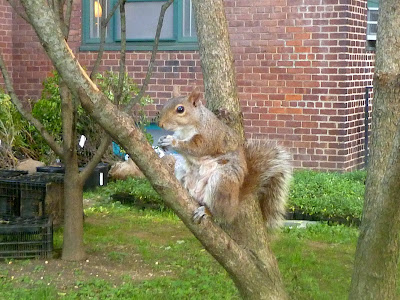 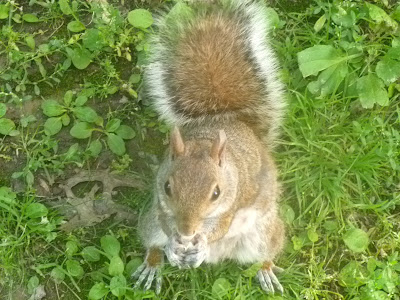 .
The Lord giveth as the Lord taketh away 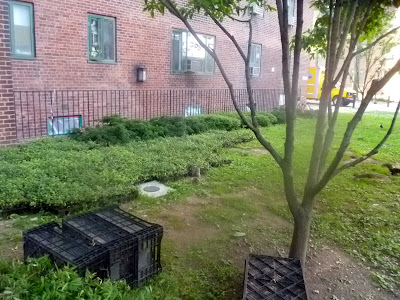 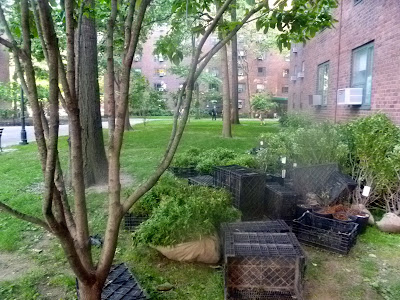 I returned yesterday to check on the squirrels.  I hadn't been here since stopping in last Saturday, when everything seemed pretty normal. I was curious as to what I was going to find after about a week of staying away. The first thing I found was a bunch of very hungry squirrels. 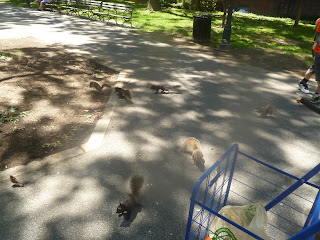 The good news: Gray Momma's tree is no longer off limits to other squirrels, and the tree is buzzing with life. 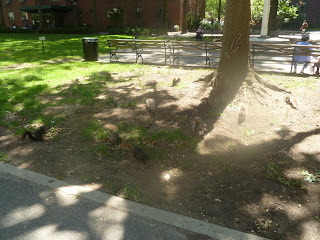 The bad news: I saw evidence everywhere of the collateral damage caused by the war on squirrel feeders, which is turning out to be a war on squirrels: 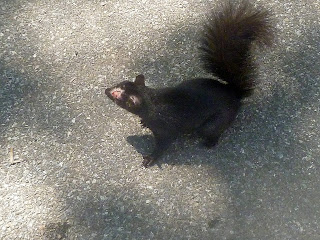 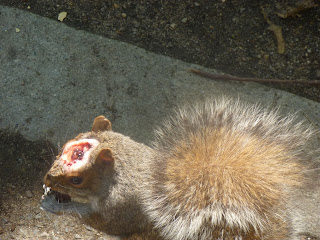 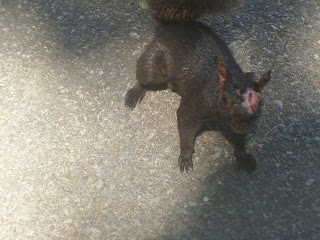 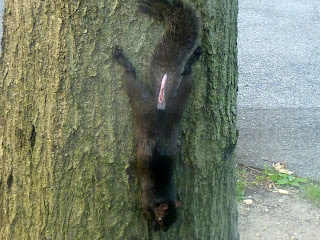 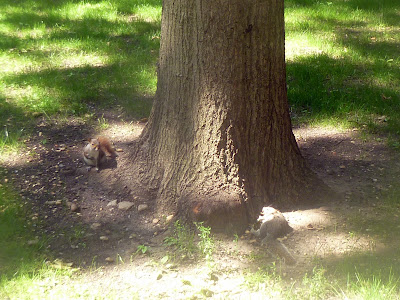 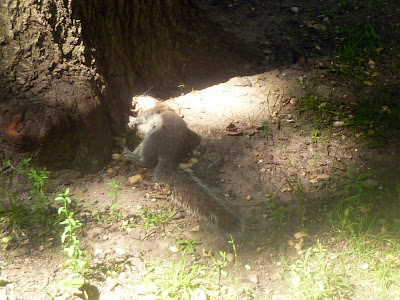 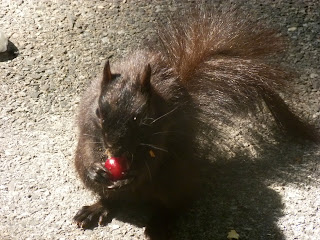 This exquisite creature is a member of the purple family that I was recently blogging about that lives in The Purple Tree by the fountain. http://thenewyorksquirrel.blogspot.com/2013/05/i-never-thought-id-ever-see-purple.html The little one is having trouble eating. It takes a very long time to eat one small nut. It's always a life-threatening condition when a squirrel cannot chew. It can happen for a couple of reasons: a malocclusion, which is where the squirrel's teeth keep growing because they are not getting ground down for some reason, or a systemic infection that can result from a a
lowered immune system due to not getting enough nutrition. In either case, it's a serious condition that needs the attention of a rehabber or vet. 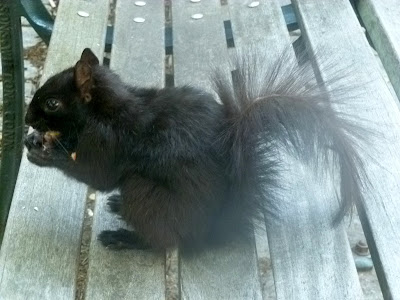 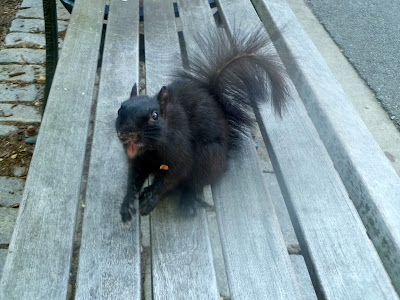 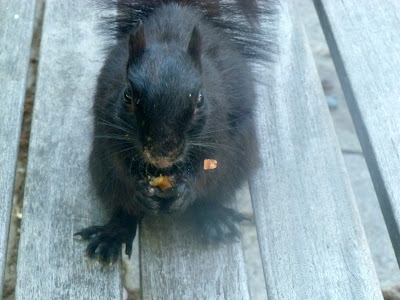 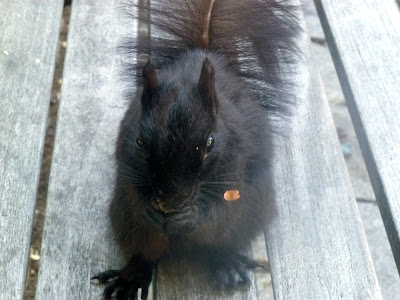 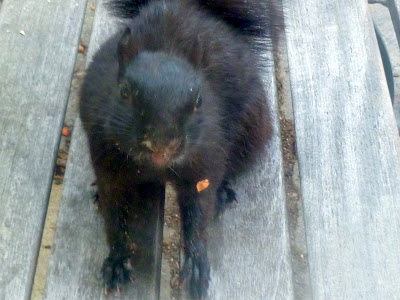 All squirrels are worth saving, but a purple squirrel is especially precious, not just because they're so beautiful, but because they're so rare. I've never seen them anywhere else but at Peter Cooper Village. I can remember when there was only one, then two, and now a whole family is living in the Purple Tree.

Here again, I am happy to say, we have some more photos from Gary Rabenko. This is his 40th year as a professional photographer, so his photos might even be a bit better than mine ( just joking !) .  Actually his work is quite incredible, and can be seen at www.rabenko.com.

As the artistic and technical director at Rabenko Photography and Video Arts (www.rabenko.com), Gary is all about emotion, expression and feeling in imagery.   He also has people looking great, and I guess he should, because his specialty is photographing people, their emotions, their feelings and their expressions - in short their personality at the biggest and best moments of their lives and those of their families.

Squirrels have emotions too, Gary says, and that is why he is here... more to follow on him at a later date... here now the squirrels through his lenses!