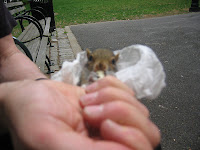 Squirrel rescuer Bernie Goetz uses a somewhat controversial formula for feeding pinkies and injured squirrels, which he devised after encountering problems with the Esbilac formula, which was the recommended formula for baby squirrels a few years ago. When on it, two of his baby squirrels almost died of uncontrollable diarrhea.

At the time rehabbers were vigorously endorsing the Esbilac product. Eventually the tide of opinion turned towards the Fox Valley formula, although when I attended the Vinegar Hill Baby Squirrel Workshop in 2011 they were still feeding Esbilac to the pinkies. I recalled one pinky that adamantly refused the syringe, which is apparently not that uncommon a reaction. The  Fox Valley formula for baby squirrels is a much improved formula,  but there are still squirrels that refuse it. Check out Mira's story: http://thenewyorksquirrel.blogspot.com/2011/07/miras-story.html
﻿
﻿


After the experience with Esbilac, Bernie shied away from highly processed formulas and synthetic ingredients, including those in the Fox Valley formula, and has been taking an all-natural approach, with various versions of a formula that he devised himself. He started out with a base of tapioca pudding and hazelnut milk, then substituted that with a formula primarily composed of rice pudding and cow's milk. He reports that  he has encountered zero resistance to this formula, and that most squirrels thrive on it.
﻿

﻿
Bernie's Original Infant Squirrel Formula
Can be used as an alternative to Fox Valley or Esbilac.

BLEND 1 part Kozy Shack rice pudding with 1 or 2 parts regular milk. After blending, refrigerate and let sit for several minutes so the small amount of rice husk settles to the bottom. The settled sludge is not used but is less than 10% of the mixture. Heat small portions as needed.

Kozy Shack's rice pudding has all natural ingredients:  low fat milk, rice, sugar, eggs, salt, and vanilla
Bernie says that squirrels love the taste of this formula and he has no difficulty getting them to accept it. It also stops diarrhea. You can add small amounts of additional ingredients such as the following: 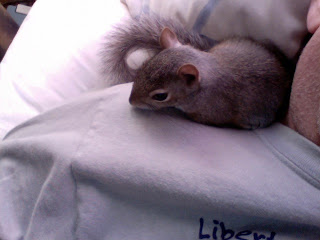 Bernie recently had a baby squirrel on the natural formula diet tested at the vet, and it was found to be anemic, specifically needing more iron. The problem was solved by changing the formula to a 50/50 mixture of organic half&half and Progresso lentil soup which was blended and strained so as not to clog the syringe.
Says Bernie: I don't think the squirrel would look as cute if he had been raised on Fox Valley.

Calcium deficient squirrels usually experience "calcium twitching", which can be fatal. Bernie says “RepCal ultra fine calcium powder with vitamin D3” (suggested by squirrel rehabber Gary Rabenko) is the most practical solution. It can be dissolved in Almond milk, pear juice, or whatever you have handy that squirrels like. See: http://www.petmountain.com/show_product/11442-105551

In its favor, Fox Valley Formula (FV) is a milk replacer specifically made for squirrels, whereas Esbilac is "puppy milk". But FV still has its problems.

For example, people will sometimes use the less expensive FV formulas made for other animals such as beavers or black-tailed deer.

Also, the squirrel formulas contain corn syrup solids. A new study from Princeton on High Fructose Corn Syrup found that “Rats with access to high-fructose corn syrup gained significantly more weight than those with access to table sugar, even when their overall caloric intake was the same."

Chances are the corn syrup solids are made from genetically modified corn.

And the latest on HFCS says that it is made with the use of a hazardous chemical called glutaraldehyde,  a toxic chemical used in industrial water treatment systems and to sterilize medical equipment by killing living cells. It’s also a well-known embalming chemical. It is toxic to the human body and causes eye, nose, throat and lung irritation (asthma, sneezing, wheezing, burning eyes, etc.). It can also cause drowsiness, dizziness and headaches. In fact it is an extremely dangerous product that can actually burn a hole in your stomach. Read this scary report from Mike Adams of  Natural News:  http://www.naturalnews.com/032948_high_fructose_corn_syrup_glutaraldehyde.html

After reading this report you probably won't want to be ingesting any more high fructose corn syrup yourself, or giving it to your pet either. The problem is, HFCS is in so many foods, from soft drinks  to jams and jellies, to bread and breakfast cereals, that it's difficult to avoid it unless you stay away from processed foods altogether, or studiously read labels. It's actually easier to keep it out of your pet's food. That's certainly what I would do.

Note: make sure you buy pure maple syrup, not commercial products that contain high fructose corn syrup. I get mine from the local farmer's market, where I was told that it doesn't matter which grade you choose in terms of nutrients. I personally prefer the darker (and cheaper) Grade B maple syrup.

Gary Null on his radio show advocates giving only raw, organic foods to your pets. Gary has an assortment of domesticated and wild animals living on his Paradise Gardens estate in Florida.  He only feeds them natural, organic foods. No canned food, no dried kibble and no synthetic formulas are used. No processed or cooked food -- everything is raw. It goes without saying that Gary's animals are vital and healthy.