State of the Squirrels

So how are the squirrels doing? A lot of them seem to be missing. Sometimes when I go for a walk around there I don't see a single squirrel.


Bad Humor Man: The Case of the Grumpy Guard


A lot of the guards are with me -- they tell me almost apologetically that the only reason they bother me is because someone called up and complained, and it's their job to follow up on every complaint. It's their duty to recite the no feeding mantra. Not this guard, though: this guard is out to get me. He'll ride his scooter up and down the sidewalk, buzzing me. He seems to think it's his mission to not just enforce the rules, but to wipe out the squirrels of PCV.


He doesn't think I have the right to feed them even on the city sidewalk, because "they bring those nuts back and bury them on the property." Well we can't have that. Why not? Because that's the letter of the law, not the spirit of the law.

This is our home, where we played and slept and ate and raised our babies. It's where we used to get fed. 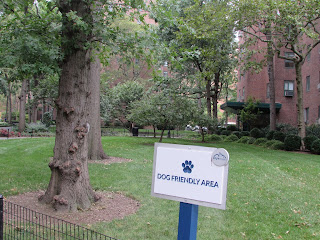 Sometimes when I go out there, I don't see a single squirrel. The bottom line is, there are a lot of missing squirrels. That's what many of them wanted, apparently. And they won.
I think the ultimate objective is to exterminate the squirrels at Peter Cooper Village in a humane way . What does the word humane even mean? It has roots in the word "human". We have the Humane Society. The connotation of that name is that we treat animals with compassion. Anyone on Facebook has seen horrific examples of the opposite. Just recently I posted a  picture of dolphins huddling in fear before being slaughtered by a Japanese hunting crew. Mankind in general, has not been kind to animals, except for a select few that were domesticated as pets that mirror our narcissistic view of ourselves.

My squirrels are doing okay. They each have completely different personalities. Lady Gray acts like a cat. She is shy and standoffish. She never shows emotion but I know she must love me. Lady Black is all over me, like a dog. If I throw peanuts she runs to retrieve them (although she never brings them back!) She jumps onto my cart and loves taking a ride while ferreting for peanuts. One night when I was there waiting for someone, Lady Black stayed nearby, even in the dark.

I call her Lady for short.  While other squirrels come to eat, Lady comes to play. I receive a lot of harassment, but will I ever give up on feeding squirrels? As long as she's out there, so am I. 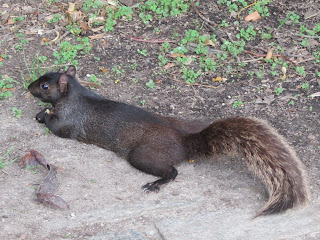 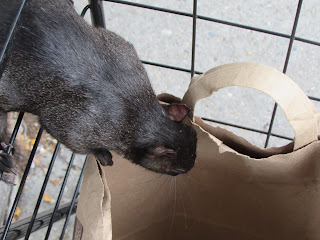 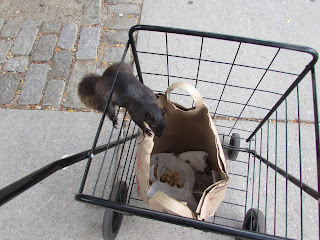 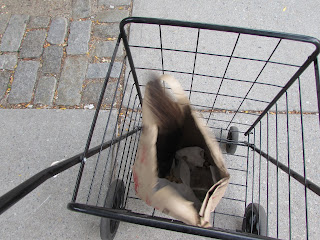 In the years that I've known her, Lady Black has produced several generations of healthy, beautiful black babies. 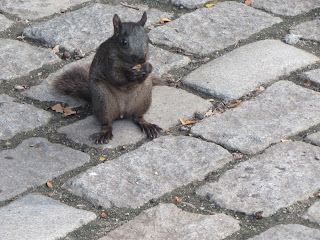 Her nickname is Waddles, but she doesn't waddle much these days, having become much sleeker on her new diet. She produces those lovely orange babies so maybe I should call her Lady Orange. Her coat is a mix of orange and gray. Basically she's a common gray squirrel, but an uncommonly beautiful one.

I'm always worrying about her when I don't see her for long periods of time, but she always shows up eventually. I've often thought someone else could be feeding her. But recently she hasn't bee  been looking so good, so maybe they stopped. I was told by a squirrel-loving couple who live there that they've been threatened by Management with fines if they feed the squirrels, so many residents have no doubt been scared off.