Max: I Enjoy Being a Squirrel

I met a wonderful squirrel named Max today, who lives with a very nice couple named Sam and Sandy and their cat Suzie.

A year ago last May, Sam found Max lying on the ground after she had fallen out of her nest, which often happens to baby tree squirrels. Unless it's in a hole in the tree, a nest is not always the safest place to be. She was quite sick and dehydrated when Sam found her, and she was nursed back to health with tender loving care by Sam and Sandy.﻿
﻿
﻿ ﻿ ﻿
﻿﻿
﻿ By Christmas time Max is a bouncing, healthy squirrel who can't wait for Santa  to arrive. ﻿
﻿
﻿ ﻿
﻿
Today she is so good-natured and relaxed that nothing seems to bother her.
﻿
Max loves life. She loves everyone and is not at all fazed by Suzie, who shares the same space.
﻿
Max and Suzie enjoy a peaceful coexistence, thanks to a bit of clever engineering by Sam and Sandy. And Max is not at all bothered by strangers. She acted as if I came by every day, and just went about about the business of having fun and putting on a show for us. She's a bundle of energy who runs and jumps and plays all day, and does so without ever damaging the furniture! Okay, she's been known to nibble on a wire or two, but what's a teething squirrel to do? All wires are well hidden from sight.
﻿ ﻿

Who says squirrels don't make good pets? Max is a source of great joy to her parents, who are so attached to her that their daily lives kind of revolve around her. She is more lively than the Suzie, who is barely more than a kitten. Suzie prefers to sit in or near her cage when Max is out and about. She seems to enjoy just sitting there and watching Max's antics from a nice, safe place.
﻿﻿ ﻿
﻿ My problem with having a cat as a pet is that while I love the playfulness of kittens, once they grow up into cats, they slow down and lose that wonderful playfulness that makes them so irresistable as kittens. I used to imagine using genetic engineering to create a kitten that would never grow into an adult cat. Endless kitten. Well guess what? Squirrels are a lot like that. They do not lose their quickness when they mature. That makes them more playful than cats, and therefore better pets in my opinion. And squirrels are actually more affectionate than cats, being more like dogs in that respect. But it's much easier to snuggle a squirrel than a dog!
﻿﻿
﻿﻿ ﻿


The Life of a Squirrel

﻿
﻿ What's life like for an apartment squirrel? Max sleeps in the bedroom with her parents. Her nest box is located up on top of a tall chest, which is where squirrels like to be. She awakens at 7am sharp each morning,  Then she wakes Sam up ﻿
by running over him at 100 MPH, and will sometimes "bite" his hand when he's less than responsive. Actually Max never really bites. But she wants out of the bedroom now and needs Sam to negotiate that. You see, Suzie is often sitting on the other side of the door, so it usually takes a bit of maneuvering!
﻿﻿﻿
﻿

﻿﻿ ﻿﻿After breakfast Max runs and jumps and plays away the morning,
then takes a nap between 11am and noon. When she wakes up it's time for lunch, then playtime for the rest of the afternoon. She loves playing with her stuffies. But she doesn't play with Suzie the Cat. They manage to carefully and cautiously and politely steer clear of each other.
﻿
﻿
By 4pm it's time for an afternoon nap. Max then wakes up like clockwork at 5pm, and goes to the front door, where she sits and waits for Sandy to arrive  home from work. Max knows as soon as Sandy steps off the elevator into the hall. It seems to be telepathy. I've sensed that kind of telepathy with my squirrels. Like how they know when I've arrived and will suddenly appear "out of nowhere". Unless of course, they're all sitting up there in the trees, waiting and watching all of us. Sometimes I wonder if I'm walking through PCV with hundreds of tiny squirrel eyes fixed on me.

After supper Sandy wraps Max in her "blankie" and croons lullabyes to her, which she absolutely adores.
Then at around 7pm Max climbs into her nestbox and goes to sleep for the night. She normally sleeps through the night without waking up.

Max enjoys being smooched and cuddled by Sandy but she also loves Sam, who takes care of her during the day. It's somewhat unusual to see a squirrel that is equally attached to both "parents". Often it will be one or the other, with the squirrel liking one and taking a dislike to the other. A female squirrel may bond with the male in the house and ignore the female,  while a male squirrel will bond with the female and will even attack the male. This can be quite serious, as we've seen with Rama Rota, the King of Costa Rica. Trouble in Paradise
Rama has two loving parents, but one day he turned on his Dad, who had to constuct a helmet and mask to protect himself! But Max is quite even-tempered and gets along fine with both Mom and Dad. And I can attest to the fact that she is great with guests too. 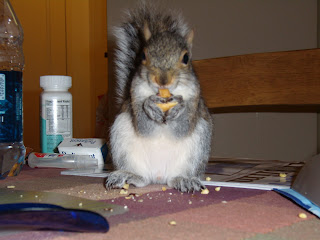 What does Max like to eat? She likes a variety of nuts - walnuts, hazelnuts, cashews, macadamia nuts.  Unlike most of the wild squirrels that go crazy for them, Max is not a big fan of peanuts. Of course an occasional peanut is nothing to sneeze at. 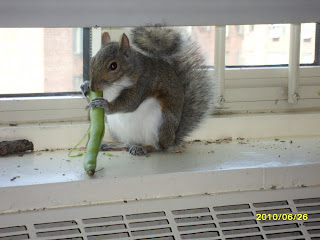 But Max also likes greens like lettuce and asparagus and stringbeans and avocado.  And she also eats carrots and corn.  I have not been able to get my "outdoor" squirrels to eat greens, carrots or corn, although Bernie has had some luck feeding corn to his squirrels at Union Square Park. I wish my squirrels had a more varied diet, but it's hard to get them to like new things. They're not overly fond of veggies. I've recently discovered that they will take an occasional piece of bread. 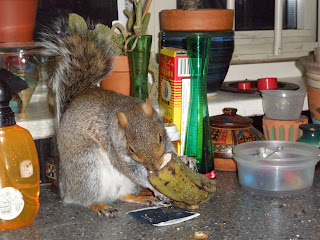 As for fruit, Max especially likes cherries and plantains. Here she is enjoying a piece of plantain.

And then there is "Forbidden Fruit". Nothing like the taste of cactus flower. Mmmmm. 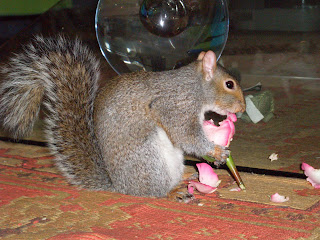 Even cactus leaves are okay! Just have to be careful of the prickly parts. 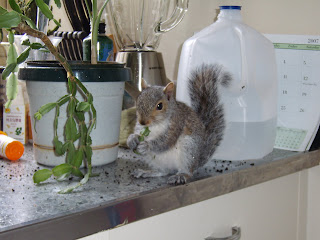 Max reminds me of the first squirrel I ever befriended back in the winter of 2007, a squirrel I named Ruffles, because she had a "ruffle" of fur around her midsection. Ruffles was a big gray squirrel that looked a lot like Max. I was to learn that she was also an old squirrel. She was definitely an "old spirit". We often communicated via what may have been telepathy. She always seemed to know when I was in the area. And she was always smiling when she came over to see me. Ever seen a squirrel smile? Then one day something bad happened to Ruffles. I remember the last day I saw her. She came over to take a nut and to say goodbye. I saw that her paw was shaking when she took the nut from me. I wondered if she was having a stroke or had perhaps just had one. She did not eat the nut, but took it with her as she ran up a tree. I never saw Ruffles again.

When I met Max her calm, friendly spirit reminded me so much of Ruffles. I might have thought they were related if they didn't come from different parts of town.  Max is a very special squirrel. And also a very lucky squirrel to have such loving parents. 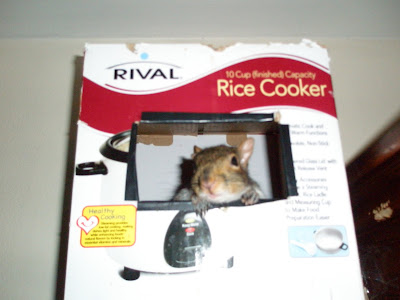