A most unusual squirrel

Was I seeing things? I was looking at a small black creature with four tiny white paws, and a cute little white nose. It looked like a cat but had the shape of a squirrel -- and that was definitely a squirrel's tail. I threw out some peanuts in an attempt to get closer to examine it. But it was very young, still at the stage where it dodged peanuts like bullets,
preferring to wrap itself around a branch and nibble on the tender buds of spring. I was very excited because I had never seen anything like this before. It felt like a gift. I had taken care of the squirrels all winter long, expecting no reward beyond seeing them survive, but if I was going to get a reward, this would be it  -- in the form of a squirrel, no less! My only wish was to share this special sight with others, but unfortunately I didn't have my camera with me. So I went back day after day, armed with camera and high hopes. looking for that squirrel. But I didn't see him again. I had pretty much given up on ever seeing him again and then suddenly, there he was!

And he was much more approachable this time. It had only been a week or so, but he already seemed much more confident in his surroundings, and acted like an old hand with the peanuts. He recognized them as something he definitely wanted to be around, which enabled me to get up close and personal!

And of course that soon drew the usual crowds, who can apparently smell a peanut from a mile away.  I noticed that the other squirrels where not treating him very kindly, and chased him away mercilessly. Not sure whether this was due to his unusual coloration or because he was so young. Do squirrels discriminate against the Other? But he was able to hold his own with a little help from his friend (me) and an admittedly great incentive for sticking around (peanuts).

After I recovered from my initial surprise, I realized that most of his unusual characteristics -- white paws, a white belly, even a white nose -- were normal characteristics of a gray squirrel, and only seemed  unusual on a black squirrel. I guess this is just more evidence that there really is no difference between the gray and black squirrels in our neck of the woods.
﻿ 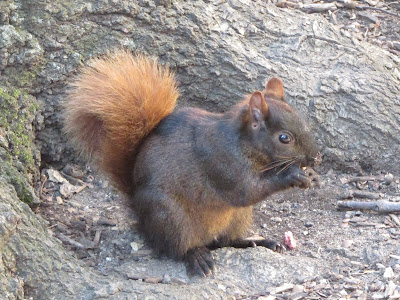