A Tale of Two Spunkys

Here's the latest. Spunky now has a doppelgänger who has set up housekeeping in the tree next to hers. Just as Spunky has commandeered her tree, and won't let other squirrels near it, this squirrel appears to have done the same with the tree next door. This squirrel resembles Spunky right down to the hair loss and patches on her back, which is why it confused us in the beginning, before we realized that we were dealing with two squirrels. We'd be thinking we were feeding Spunky when we were actually feeding the other one! Do they both have nests of babies in their respective trees?

Of Castles and Squirrels

Oh my... Creme Puff rubs shoulders (so to speak) with the crème de la crème at the castle!
http://www.gfinthecity.com/2012/03/of-castles-squirrels.htmlCrèm

Did you know cream puffs are a specialty of the castle? 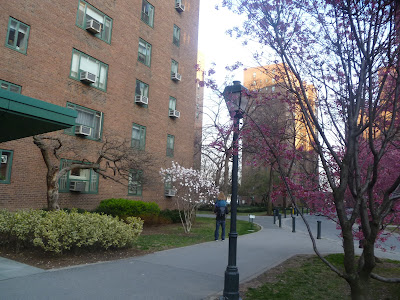 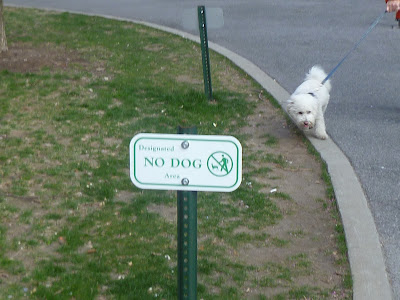 The  weather is beautiful. This must be the mildest March in memory. The sun is warm and there's just enough chill in  the air so it doesn't feel hot, which eases the transition out of winter. The days are so much longer now, with the sun setting at 7pm. 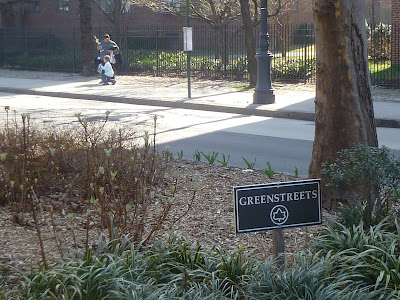 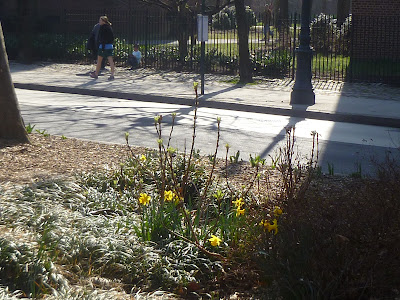 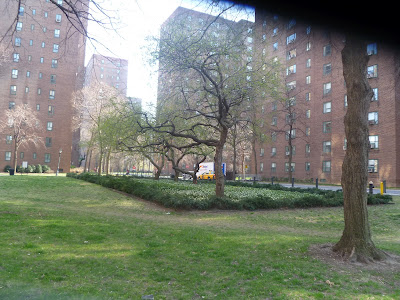 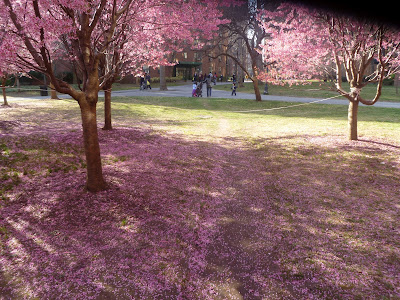 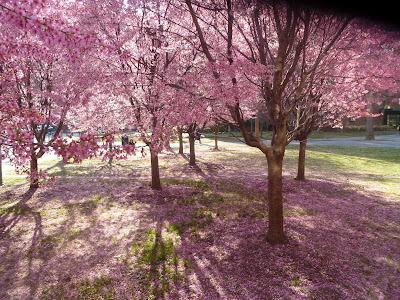 Everybody is out celebrating the Spring Equinox 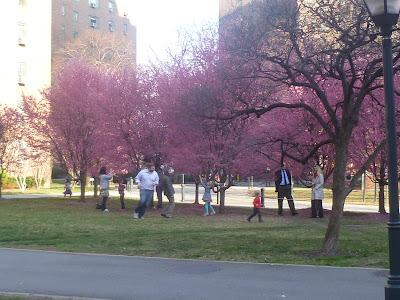 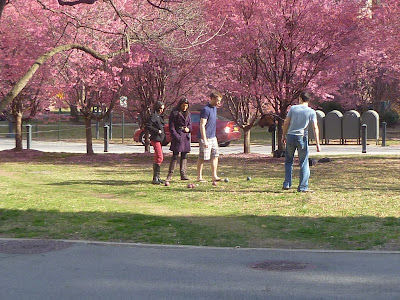 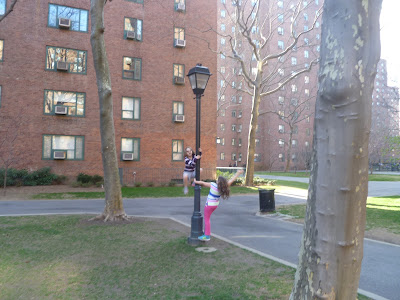 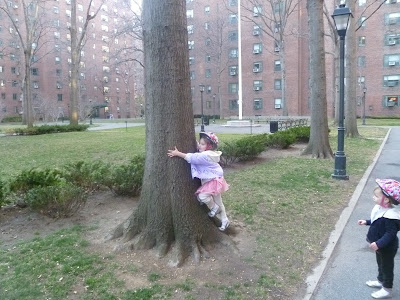 The squirrels are equally excited. There's something in the air. Could it be the smell of Spring? Or the smell of peanuts? Maybe a little of both :) 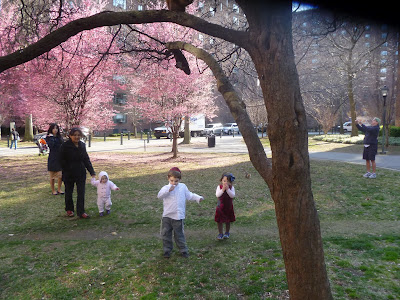 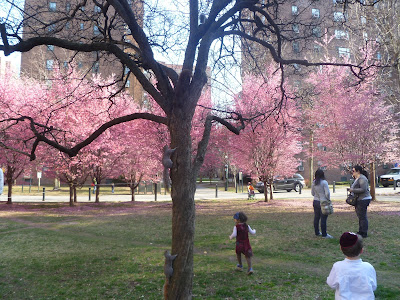 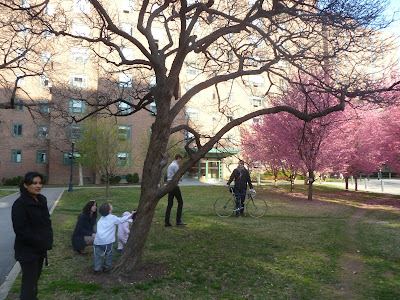 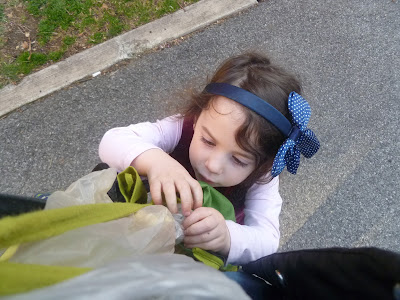 Everybody who is anybody is out there today
﻿﻿﻿

Creme Puff wants to dismount and have some fun.


Cherry tree nests - engineering marvels with scenic views
How do I love Spring? Let me count the nests. The blossoms hide many nests. Each picture is of a different nest. I actually believe they may be bird nests, not squirrel nests. Did I see any occupants? No. They may have decided to desert the nests due to all the activity going on around them. 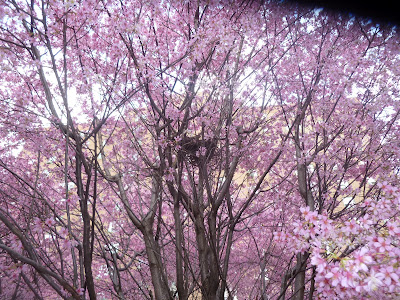 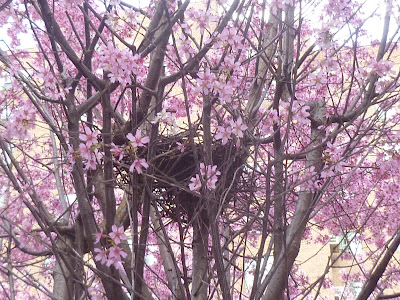 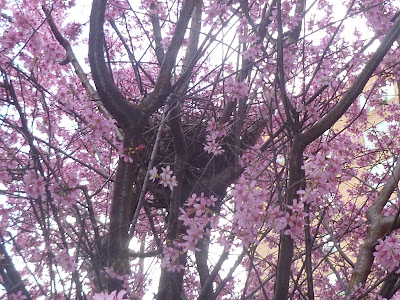 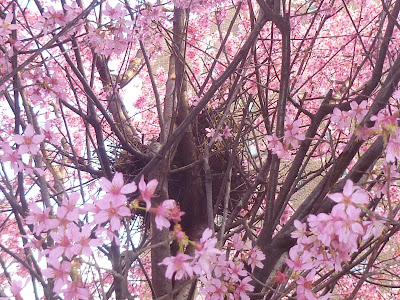 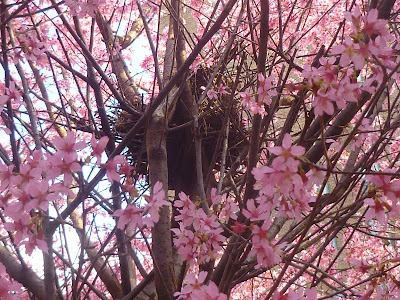 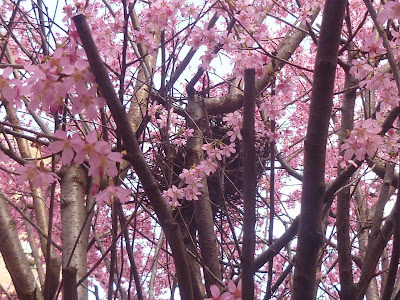 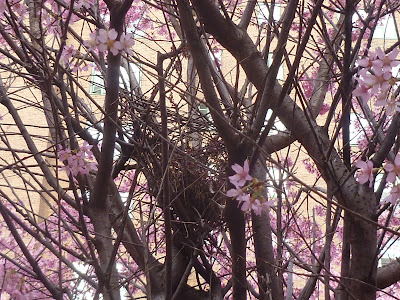 We found a dead red-tailed hawk today, lying in the bushes just east of the entrance to 3 Peter Cooper Village. Such a magnificent creature! And such a sad thing to have happened. This is the fifth bird to die in the last few weeks and there's some suspicion of poisoning. The rats eat poison and the hawks eat the rats. There is good coverage of the other four hawk deaths on this blog:
http://palemaleirregulars.blogspot.com/2012/03/hawk-season-of-despair-four-gone-in.html 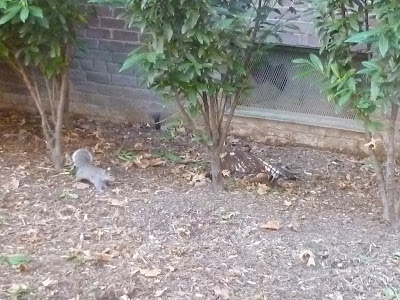 3/19 Update
The next day I had a difficult time trying to figure out whom to contact. I read a lot and discovered that four other hawks had died in the past few weeks, so I thought it was important to let people know about this one. I posted this blog and then started notifying people. As the day wore on, I still had not made the right contact, and I was getting nervous.   I ran over to PCV to check that the hawk was still there, and it was. At last I got in touch with Lisa Colangelo of the New York Daily News, who has written about the recent hawk deaths: http://articles.nydailynews.com/2012-03-09/news/31141636_1_bobby-horvath-female-hawk-pale-male
Lisa told me to contact the New York State Department of Environmental Conservation (DEC), so I called the 24-hour dispatcher  in Albany, who connected me to Officer Machnica, and within in a New York minute they had arrived at PCV! I led them over to the hawk, where they took pictures, bagged it and placed it in their Crown Victoria for transport to a holding facility. 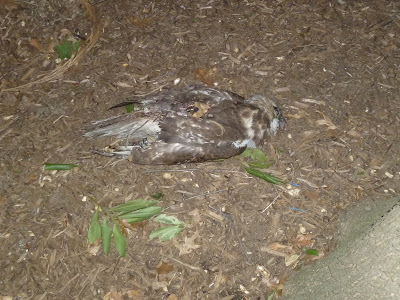 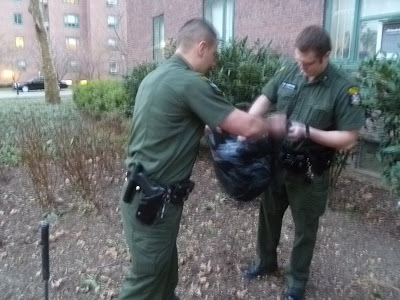 The hawk would be refrigerated overnight, then sent up to the toxicology lab in Albany the next day. Officer Machnica said that he'd be in touch and let me know the results, which could take weeks. He said the results so far have not been conclusive as to whether any of the hawks had died of poisoning. He told me about some dead otters that they had just found on Staten Island. He said it was amazing to find otters there, and that it represented a comeback to the area. These guys were so nice, and they have one of the nicest jobs I can think of: they go around the five boroughs checking on wildlife -- either dead or alive and threatened. Of course if they encounter a human in distress they  also help out. A big thank you goes out to DEC for their quick assistance!

ed. note: I had multiple motivations for doing this. First, I believe that you have to get the news out, no matter which side you're on. Second, I think it's important to find out if the birds are being poisoned, because if they are it could lend weight to the argument against breeding more hawks in the city. As much as I love looking at all the gorgeous pictures of these birds, I still question whether they belong in New York City. Is it fair for us to indulge ourselves at the expense of these creatures? My other concern is for the squirrels who are treated like pets here, and I do not like the idea of them being sitting ducks for the hawks. If a hawk ever took Alphie for example, you can bet that I'd be extremely distressed.