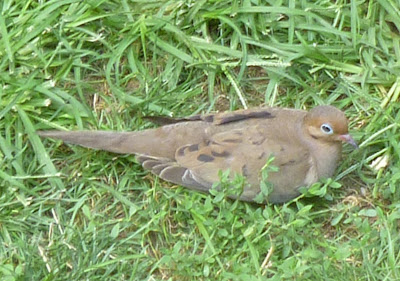 The summer winds
Like painted kites, those days and nights
They went flying by
The world was new beneath the blue
Umbrella sky

What a day! All kinds of nice things happened. starting with encountering this sweet baby mourning dove. Then I had a happy, peaceful picnic with the squirrels by the east flagpole. 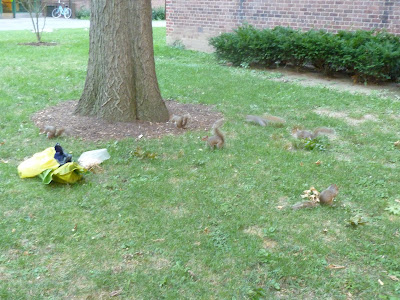 They hadn't seen me in a while and were very friendly and very relaxed. Especially when I looked the other way while they raided the bag of peanuts on the grass. Hey, I was feeling laid back today, what can I say? They all got along, with no competition or bullying going on. I take this to be due to the influence of  those two grand matrons Tubby and Spunky, who were both present, setting an example of  polite squirrel behavior to the younger generations.

I think I saw Pinky today!
I'd swear this is Pinky's face. What do you think?﻿
﻿
﻿﻿ ﻿
﻿And he has Pinky's personality. Not too shy, gets up close and personal, doesn't scare away. That was Pinky's behavior. I remember once he was so excited to see me that he jumped up and hitched a ride on the bottom of my bag! But why did he disappear for such a long time? I wish I had the answer. Squirrels are mysterious creatures.

Black Patch was also around. He no longer has any patches, but the most beautiful soft, black baby fur. A lovely little squirrel, a true beauty in the making. 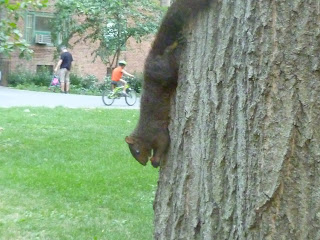 Speaking of Patches, when I then went over to his area to look for him, I called his name and he ran down the tree to greet me. He is a sweetie.


Patches does a bench trick
I know, I know... it's not a shoulder trick but hey, this is Patches, not Nibbles! 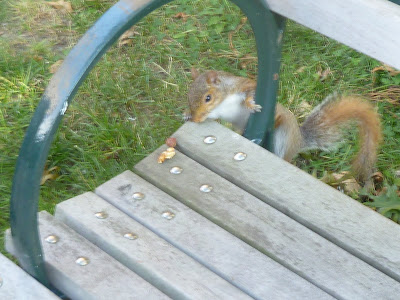 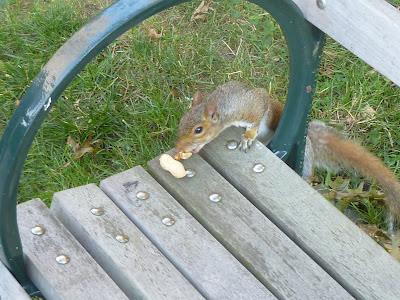 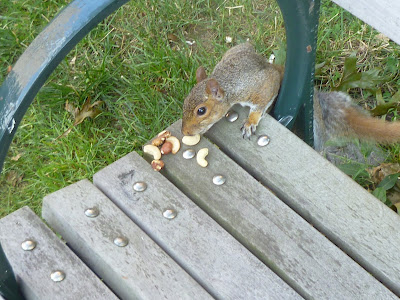 I'm delighted that Patches has started to show some initiative, such jumping up on the bench with me and even taking nuts from the bench. He does tend to be a scaredy squirrel, which is strange because he's always been spoiled by us. But it may have something to do with his awareness of his disability. In addition to his patch, he does not have the full use of his right paw, which had been
covered with the disease when he was very young. So I think this is a sign of his increasing confidence keeping pace with his better health. He may never be an Alpha Squirrel, but I think he will always be a sweet, especially sensitive squirrel.

I'm delighted that the horrid patch is disappearing. 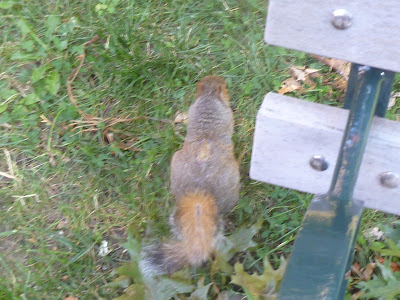 Oh I expect it will open up again, but the fact that it heals up so well that it's hardly discernible  means that he is making progress in overcoming this disease.  Maybe he'll be totally better by the time winter arrives.

On my way home I happened upon two of the Cloud Nine ducklings sitting on raft. Gosh they are big now! Both are females. You can see  the distinctive marking of the female - the blue and white stripe on the side. They are not mates, but siblings.  They do not have all their feathers yet, nor can they fly. 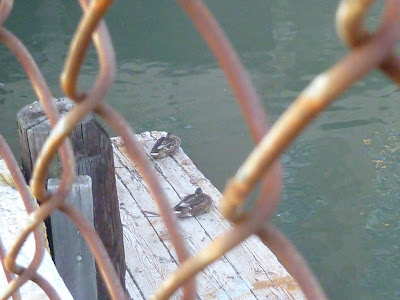 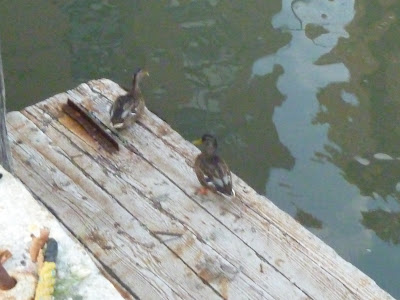 The duck on the left has something silvery hanging from her beak, probably a small fish. 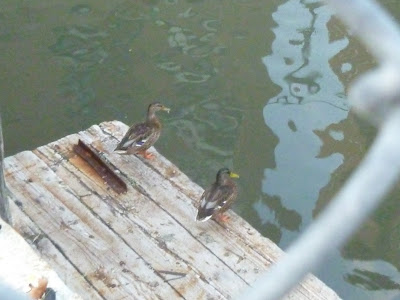 They did not sit there for very long. however. Without their siblings surrounding them and the comforting presence of their mother nearby, they quickly got camera shy and swam away. Just as I was getting out the bread! 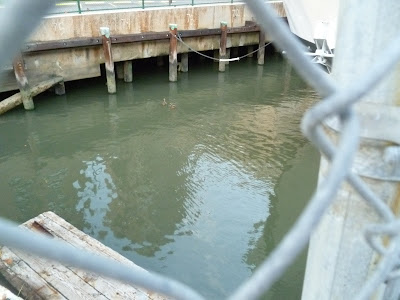 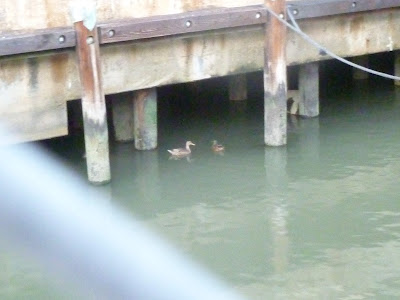 More about the Ducklings


Polished the day off with a couple of chemtrails. Or are they contrails? 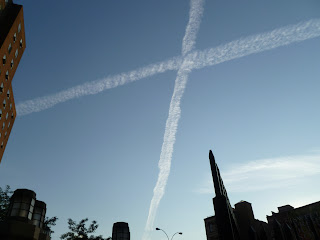 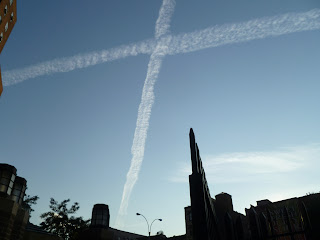 Either way, a smashing end to a lovely day!
Posted by Admin at 11:54 PM