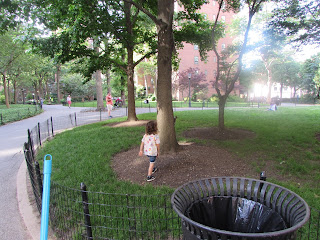 Anti-squirrel sentiment has simmered for years at Peter Cooper Village and Stuyvesant Town. When legislation was being considered a year ago to criminalize feeding squirrels in New York City parks, these two apartment complexes decided to jump on the bandwagon and ban squirrel feeding on their properties. Ultimately the NY state legislation did not pass, but at PCV and Stuytown they  cited "the law" as they proceeded to ban squirrel feeding on their private property. 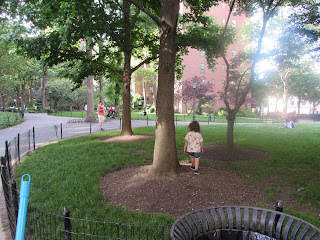 It's been a year now since the feeding ban went into effect. The other day I took a walk through the park in the north-east corner of PCV, a place where I used to spend a lot of time before I started to focus my efforts on the area where Lady Gray and Lady Black currently reside. I hadn't been over there for a long time, and I'm sorry to report that I did not see a single squirrel in an area that  had once been bustling with squirrels. Where were they? Were they all  on lockdown? Or were they all  gone? I'm afraid that this is what the majority of PCV residents want: a beautifully landscaped dead park, devoid of living creatures. 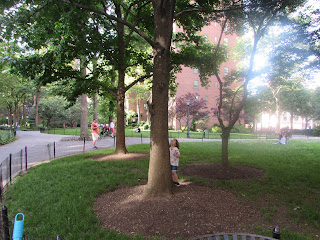 One of the main arguments for the externination of the little animals has been that they're a threat children. You see, "squirrels bite babies".  The argument goes that by feeding squirrels we encourage them to be aggressive towards children. This meme  is a perfect example of how of wild animals don't stand a chance when they come up against the well-being and comfort of humans. The animals never win.
But I have rarely seen an aggressive squirrel. It's not in their nature to be aggressive.
In fact squirrels, who are vegans,  are themselves  prey rather than predators.  As natural prey, they normally keep their distance. In fact they invented social distancing.

The other day I watched  a  group of  young children ganging  up on a black squirrel. They were surrounding a few squirrels,  screaming at them and chasing them up trees. 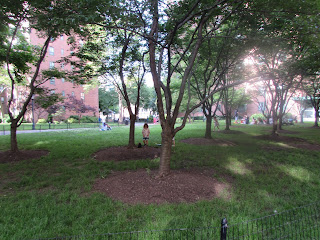 But I noticed that  one squirrel was standing its ground as they closed in on it. I got closer for a better look and realized to my horror that the squirrel was my own Lady Black. She was getting so aggravated that I feared she might strike back if they got any closer. I attempted to run interferance but the kids paid no attention. 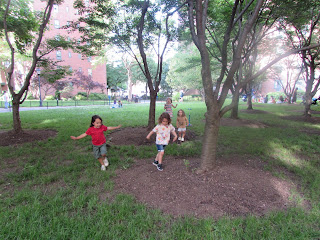 However, Lady Black finally came to her senses and ran off. I could envision a scenario in which she  might have clawed or  bitten her tormenters if she felt trapped. But this would only have been under extreme provocation and by  an unusual squirrel like Lady Black, because most squirrels would instinctively run away.  Even when squirrels  approach humans for a peanut they tend to be skittish and not get too close.  Squirrels are afraid of their own shadows. They will jump two feet in the air at the rustling  sound of a plastic bag. So would a squirrel really bite a kid? If that  did happen, it would be very rare, not a regular occurrence like they try to claim. 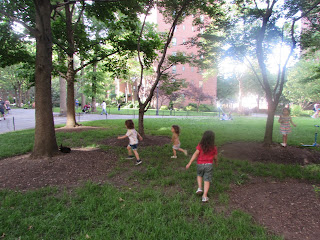 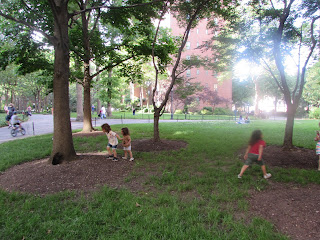 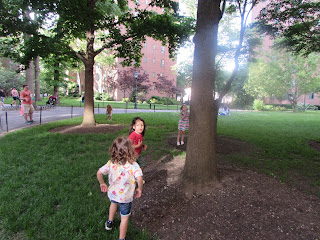 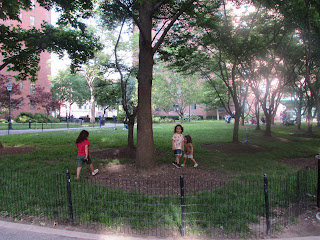 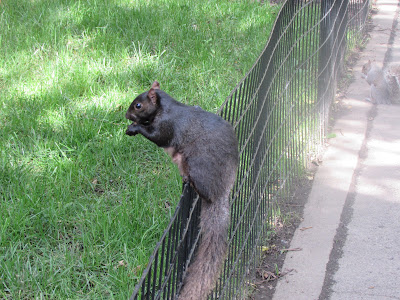 Survivor: The Unsinkable Lady Black
Posted by Admin at 11:56 AM No comments: 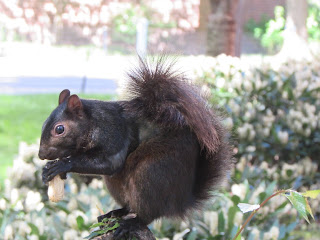 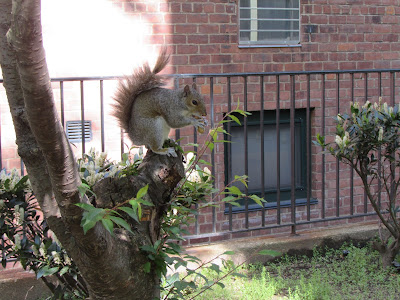 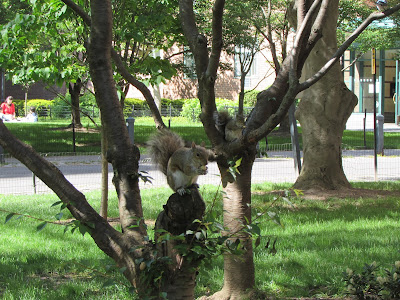 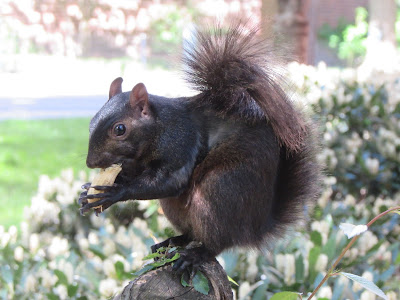 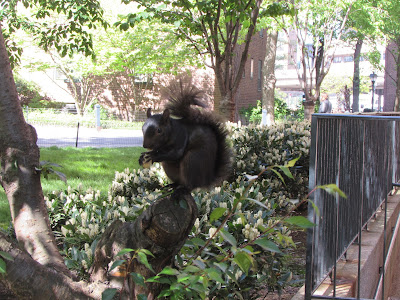 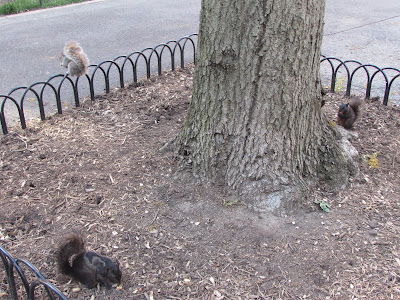 Squirrels have always practiced social distancing, both  with themselves and with humans.
. 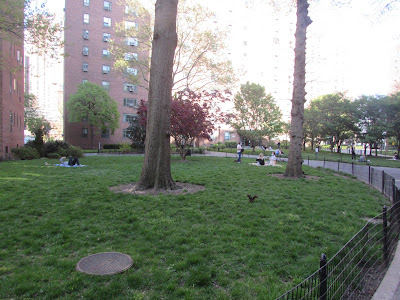 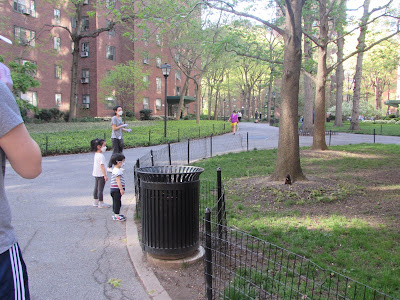 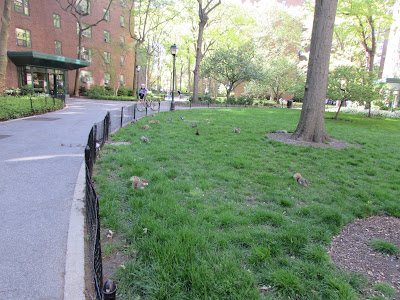 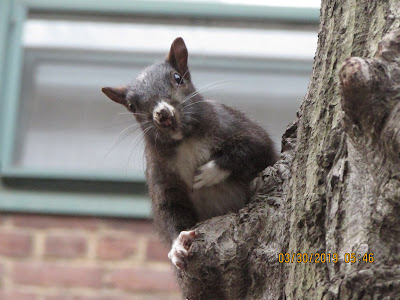 Christmas has long since come and gone,  taking the Christmas spirit with it, and leaving  in its place a mean spirit that's hard to fathom. Some residents have been really snarky and snarly recently. Why?  Could  coronavirus fears  be somehow to blame? After a long respite, the guards have been harassing me more intensively than ever. I had to remind one to keep his distance. But while some of the residents have been downright nasty, others still say things like "God bless you!" and "Thank you for what you're doing." I guess a lot of them wouldn't dare do it. One woman even wanted to shake my hand, but I refused, referring to the need for social distancing. But I thanked her for the kind thought.

As I walked around I saw very few squirrels, when I expected them to be out enjoying the nice weather. Where were they? They all seem to be practicing social distancing.

But I'm happy to report that Lady Black and Lady Gray were both there and doing fine.
﻿

And to my absolute delight, I ran into the black and white beauty pictured above for the first time since last May when the no-feeding rules went into effect. I was so happy to see that squirrel pop up alive and well, out of nowhere!  How do I know it's the same squirrel? This little bunny is one-of-a-kind! And someone somewhere has been caring for it.
﻿


Wishing you all the best on this Easter Eve, and may good spirits prevail!