Foxy is looking really fine these days. Her lesion is completely healed and she has a beautiful, soft and shiny coat. She is a very happy squirrel.

Here she is next to a pigeon ... you can see how small she is! 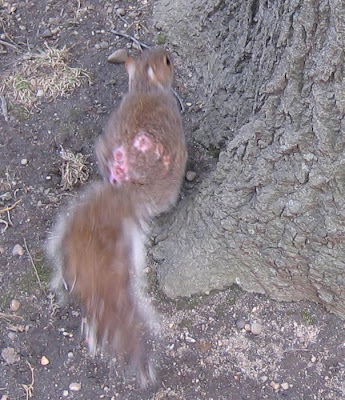 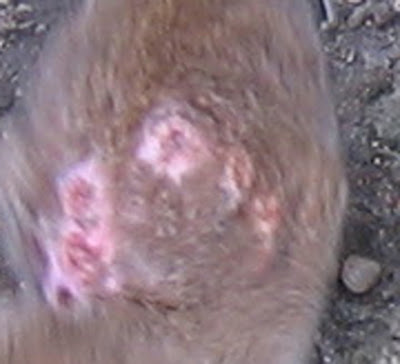 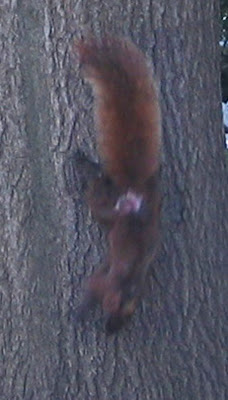 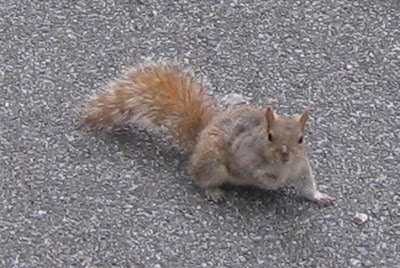 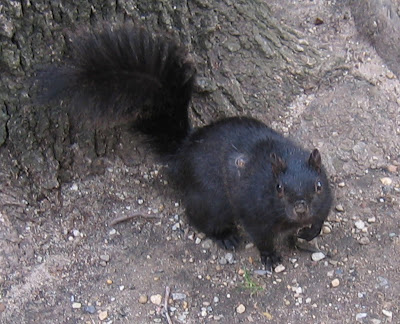 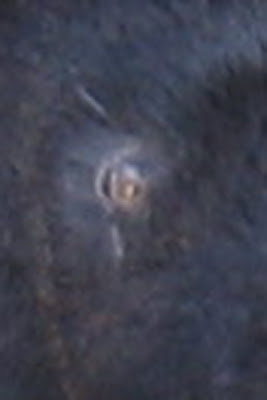 Today I gave him and the babies fresh coconut, which is supposed to be a great antiviral. And they liked it. Luckily the Korean Deli sells it, already cut up and ready to serve. It's a treat for the squirrels, sort of like ice cream. When they get a piece they take off for places unknown to enjoy it -- that's how you know it's a special treat.
Posted by Admin at 7:11 PM 1 comment:

Rain rain go away and don't come back another day! Just when things were getting better for the squirrels, this massive rain storm arrived. It's been raining for 2 days solid so far. I went out during a lull and found a whole parcel of hungry critters. The sad thing was, they all looked like drowned rats. That tells me that a lot of them don't have holes to hide in from the weather.

On the outside looking in 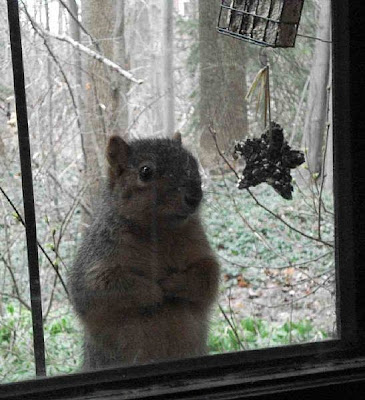 They don't have lovely, warm, toasty homes to go into like dogs and cats do. It's not fair being a squirrel.
Posted by Admin at 6:23 PM No comments:

Where tails come in useful. 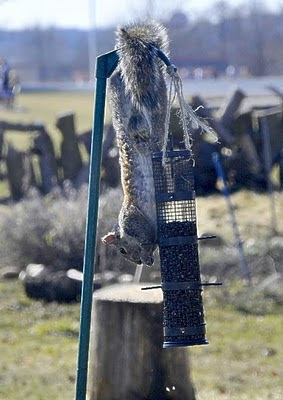 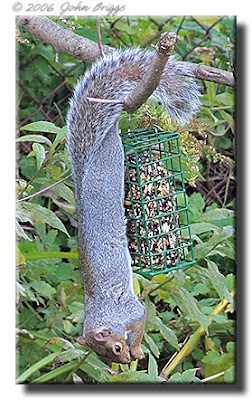 Spring is arriving at last! I'm loving these cold days as we ease into it, being startled by a sudden glimpse of forsythia or a crocus pushing its way up. And the squirrels are loving it too. Chewing on tree bark and buds on the ends of branches is the latest fad, and they are not as hungry for the store nuts. The beautiful cherry trees are already in bloom at Peter Cooper Village. Click for a larger view: 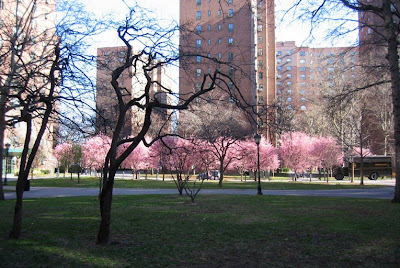 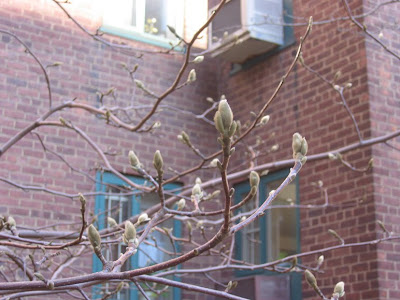 While walking through the melting snowdrifts of our recent snowstorm (20.9 inches) I found, to my surprise, BUDS poking through!

Nipping in the Buds

The break in the weather has made the squirrels playful and joyful, and much less dependent on me. Relief! I watched three young squirrels, high above in their tree, availing themselves of the nutritious nectar of tree sap that exuded from the bark of the tender branches. 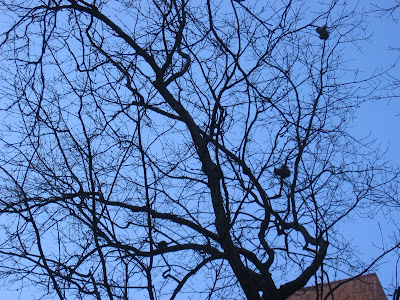 They seemed eager for an alternative to their steady winter diet of peanuts! Of course they also got other wonderful nuts, avocados, and fruits like grapes and cherries, and the occasional cookie, but this was Mother Nature calling! In fact they have not been crowding around me at all right now. There's no doubt about it though, we helped many young squirrels get through a harsh, cold winter. We (Bernie and his Angels) did a good job this year, with not too many casualties.

This man who lives in the building by "the bushes" (a popular squirrel hideout) was going in the other day and yelled out to me "Please don't feed the squirrels." He came back out a while later and saw that I was still there, having ignored him. He then became rather persistent, attempting to harass me by stopping to talk to people then turning around to stare at me and give me dirty looks. I felt like saying to him: I busted my butt all winter trying to keep these squirrels alive and healthy, and where were you? So just butt out!

But we were not 100% successful. Some of the young ones contracted a horrid disease that ended up taking their lives. I posted below about Red Fox's lesion-- at first we'd thought it was the mark of a hawk bite-- a huge, ugly wound on his rear hindquarter that seemed to be arrive overnight. But then more lesions began to appear around his body -- much smaller than the original one -- and I began to suspect something else was going on. The small lesions never gained a foothold, and the large one healed, so Foxy is doing fine today. 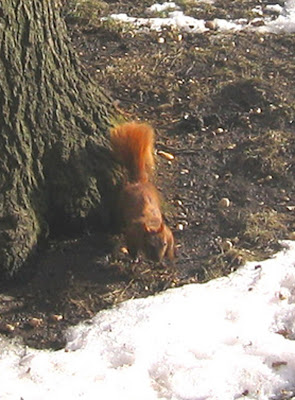 After doing some research I narrowed it down to being either a bot fly infestation (unlikely), or squirrel fibromatosis (also known as squirrel fibroma or squirrel pox). My guess was squirrel pox, although it could also be a pasteur infection, or both. Pasteur is bacterial and can be cured with antibiotics, while squirrel pox is caused by a virus, and has no cure other than the squirrel's own immune system. I did find some talk of successful use of acyclovir serum. Acyclovir is used to treat herpes viruses, and is now generic, and much cheaper than it was.

Unfortunately we were unable to save the two baby gray squirrels who contracted the disease. They were such pretty little things, with fur that was still soft. Here's one of them. 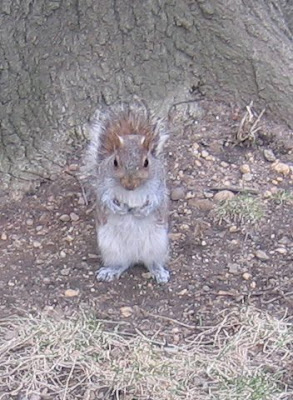 The disease came on very quickly, with the lesions appearing right after the first big snowstorm. Bernie took her home and gave her a bath and discovered cysts full of pus all over the underside of the poor little creature, who only survived for a few days after that. At least she was comfortable and well cared-for, as the other squirrels were bullying her when she tried to eat, causing her to whimper, which broke my heart. No doubt they would not let her in the nest at night either.

I was feeding the other gray baby on the day of the second big snowstorm and he just stood there in the snow and ate and ate and ate - at least 12 nuts in a row -- and I never saw him after that. He must have died in the blizzard. 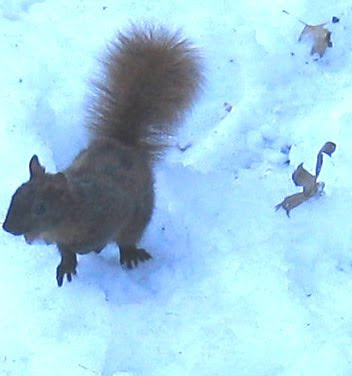 Red Fox was there too, standing in the snow, sneezing away (when Foxy sneezed his entire body rose up in the air) and eating like there was no tomorrow. Luckily he survived, and although he is thin and frail, seems to have good energy. Taz did not ever get sick. Here they are feeding together peacefully (Taz gets along with Foxy). 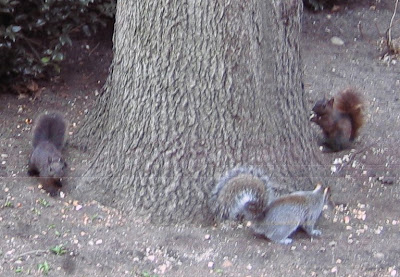 I had such a shock the other day when I went over to feed Taz and discovered a tell-tale angry pink boil on his hindquarter. I did a double-take -- this had literally developed overnight because Taz had been fine the day before! Then a little while later Taz came running over looking fine. So this was his twin, his doppelgänger! A squirrel I had not seen all winter (unfortunately) and have not seen again.

Squirrels are a magical mystery and never cease to surprise. Today again I thought I was feeding Taz, and was amazed that he came running right over and came up close to my foot, having lost all his shyness. Then I realized that it didn't quite have the same face as Taz (which is unique and so adorable). This one had a more pointy face and it also had the most beautiful, perfect glossy coat of fur I've ever seen on a squirrel. Now where did this little one come from? Where had he been all winter long? And how could he be so healthy and so fearless and friendly towards me? Another mystery!
Posted by Admin at 3:17 PM No comments: 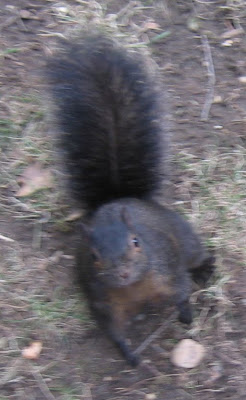 The nickname Taz is short for Tasmanian Devil-- because this one is such a little devil! He's as fast as all-getout. This is the great and sometimes only advantage that baby squirrels have over their elders, who bully the little ones, especially where food gathering is concerned. Taz is so uber-fast that watching him move around in a funny combination of a sprint and a bunny hop -- makes one laugh. And nobody meddles with Taz. Taz pounces on pigeons twice his size -- you see the feathers flying during a Taz attack! These belong to the hapless pigeons who try to horn in on peanuts thrown by Taz's tree. And Taz also attacks the bigger squirrels -- he does not discriminate -- he's fearless! Except when it comes to me. Then he's very, very shy. 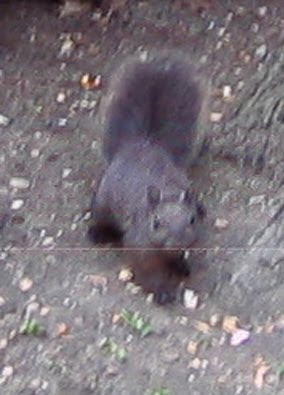