I've been feeding two squirrels recently who look like they're about to give birth... one is gray, one is black. They're always hungry! 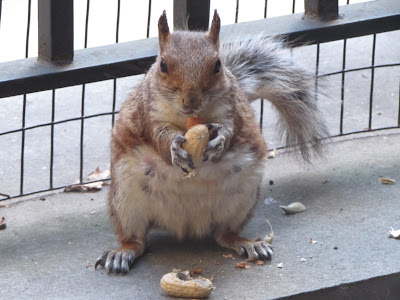 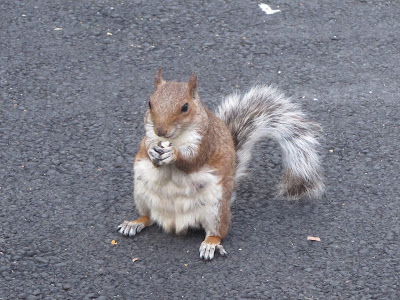 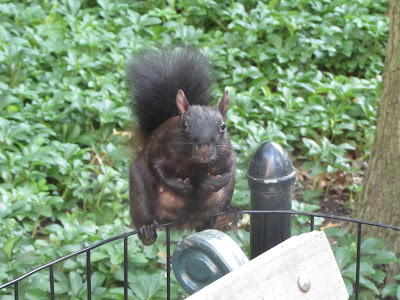 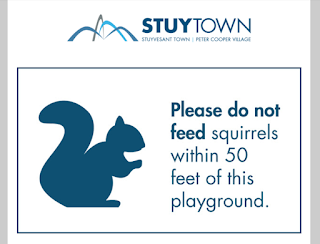 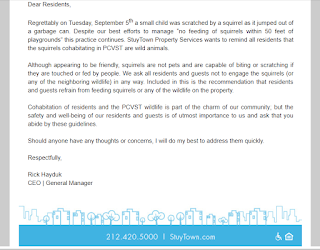 Squirrels, unless under some sort of duress, are normally friendly and rather shy. Not only that, they're extremely polite when they're being fed! I'm often charmed by that observation when I'm feeding them.
I've been remiss recently due to other concerns and was looking forward to getting back to a regular feeding cycle with them in the fall, as the cooler weather starts up and appetites increase. Plus, the last few times I was at PCV, it was disturbing to see so many squirrels hanging around garbage cans. That told me that they're not getting enough to eat. And now they're going to get even less? I doubt they'll be able to survive. There won't be any more charming "cohabitation" at Stuyvesant Town and Peter Cooper Village.
Maybe what they need is a more formal program to feed the squirrels, or maybe they could  just enforce feeding restrictions around the playgrounds. But as their letter states, the well-being of humans is above all of the utmost importance, and wild animals will always play a poor second to that.