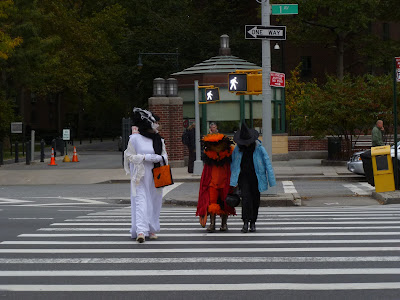 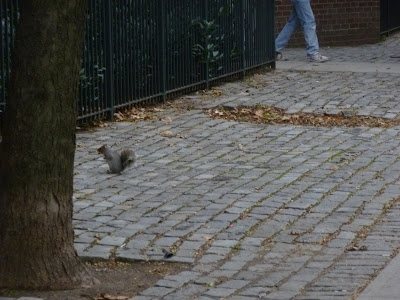 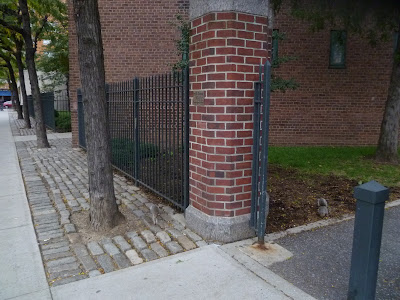 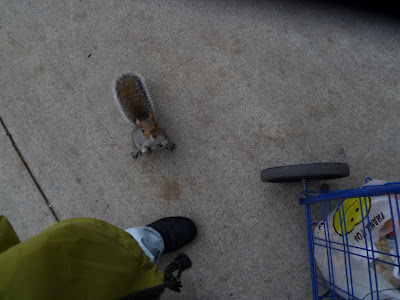 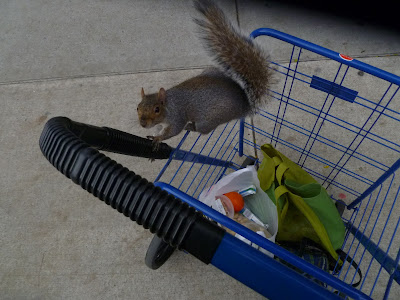 It was HALLOWEEN!
Posted by Admin at 6:52 PM No comments:

Autumn is here and we're seeing some squirrels turning colors like leaves. Squirrels remind me of the amazing chameleon that changes color in the blink of an eye. Their tails - and at times the fur on their entire bodies -  are changing all the time, but especially with a change of seasons. This seems particularly true of growing babies and brown squirrels, although grays change all the time too. It's a constant show, where you never know what to expect.  Here's how Foxy is looking nowadays.
﻿

Alphie also blends in  well with the leaves. This can be very helpful when hawks are about:


The berries are blooming: 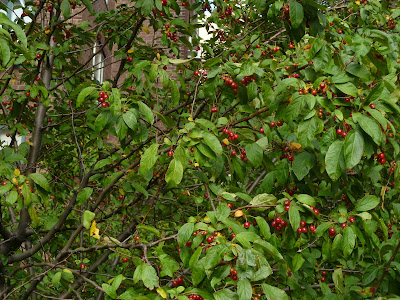 And there are horse chestnuts lying on the ground: 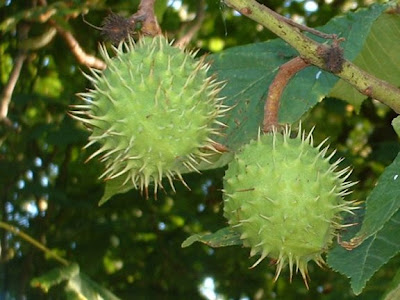 The other day I came upon Spunky eating one of these and proffered a peanut, thinking she would drop the spiny monster, but no - I had to wait until she devoured the entire thing before she'd consider taking the peanut! Can you imagine?  I guess they must be tasty, but still, all those prickly spines. How do they do it I wonder?
Posted by Admin at 1:42 PM No comments: 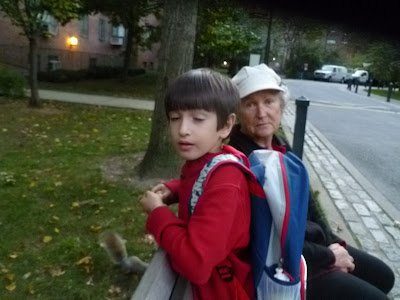 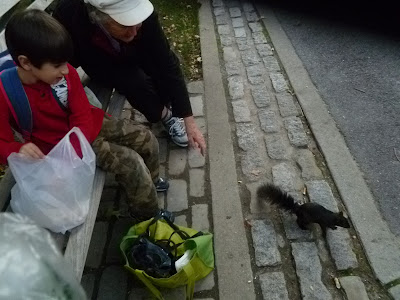 As a sort of sop to my sorrow over the loss of Patches, I have been given the joy  and wonder of  baby squirrels.  There are three of them - one gray and two brown - who are living in the orange tree - the tree where Patches was born. Yes, Patches was born an orange squirrel. He was the only one of his orange siblings to survive the winter. They all suffered from the same infection that Patches had. I was proud of the way we were able to help him grow strong and healthy enough to combat it, although eventually it seems to have gotten the better of him, just before his first birthday.

Several months ago Patches moved over to another tree not far away, where he built himself a fine nest. Bernie was the one who found him over there, after I had given him up for dead. I thought at the time that maybe he'd been forced to move because of babies and now I'm sure of it, for three little babies have been growing up in his old tree for the last few months!

Their mother is barely more than a baby herself. She's very small and was looking a bit delapidated when I first "discovered" her several weeks ago. I've been feeding her ever since, and she is very hungry! ﻿
﻿
﻿Over the last week the babies have begun to emerge from their tree. At first they would only show up around twilight time,  when it's harder to see them, but is not quite dark yet. Of course they never go out in the dark, apparently having already been taught that lesson by Mommy (or Mommy Nature). But earlier in the day you could see them scampering about together up high in the branches, eating buds or bark. Or just sitting up there looking down at the Great World Beyond.﻿

I spent a lot of time feeding their mother and other squirrels while they looked on. And eventually they started coming down the tree to find a nut. They exhibited the usual behavior of baby squirrels -- pure fright if you threw a nut at them -- so I had to throw some nuts under their tree and step away, hoping that the bigger squirrels didn't get there first.
﻿
﻿ Now when I go over they are usually down on the ground, although they quickly run up the tree when they see me. The gray squirrel and one of the brown squirrels are especially skittish. But the other brown squirrel has been quite brazen, and I believe he will grow up to be an Alpha Squirrel, so  I've already named him Alphie.
﻿
Alphie started coming quite close to me and did not run away. As you can see, he stayed still long enough for me to take this nice picture. Then yesterday he actually started playing with me! We had a game of  "touch peanut" together, where I'd toss the peanut and Alphie would retrieve it and sprint off to the other side of the lawn to bury it.

This game went on for  quite a while, until I decided to follow Alphie over there in hopes of getting another good picture. Then a strange thing occurred: Alphie started advancing towards the camera!

Then he stood up on his hind legs in a confrontational pose! (sorry for the blurred pictures - not sure if it was due to the excitement or the speed of the moment, but you can at least get the idea).
﻿
﻿ At this point I was standing there in stunned awe and amazement, when suddenly Alphie darted past me and made a fast run for the orange tree. Ah, that was it!  I had been blocking his path to the Mother Tree! Game over.
Posted by Admin at 12:18 PM No comments:

Watch this absolutely amazing video of an eagle owl coming right at ya! 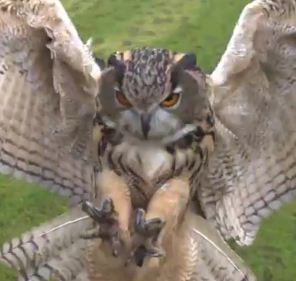 Be mesmerized. And squirrels, be scared.
Posted by Admin at 11:16 PM No comments:

I picked up some pecan crumblets (all I could afford) at Trader Joe's today. I popped a mouthful and it was simply  scrumptious - visions of pralines and pies danced in my head - this was real squirrel candy! And the squirrels  went for it. I sprinkled crumblets in the grass and they nosed about like they were on an easter egg hunt. They seemed to enjoy the challenge, with the rich reward forthcoming. 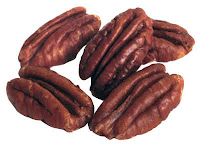 Squirrels are too funny to watch. The other day I passed a guy speeding along the sidewalk on his bicycle, and there keeping pace alongside him was a squirrel! It was the funniest thing.

Another time, a man was playing catch with his son on the grass near the orange tree, and one of the squirrels was apparently fascinated by their game, because he sat behind the man watching the ball go back and forth. There was no way the squirrel was begging for nuts, he was obviously a sports fan!

And one time when some large trucks were parked on the sidewalk near Spunky's tree, I noticed that squirrels kept going underneath the trucks just to check them out.

Squirrels are not just curious but I think  they may get bored. Living in the lap of luxe at PCV does not provide quite the challenge that living in a forest provides.

We need to think about providing more activities for our squirrels, or at least more distractions. They seem to enjoy spectator sports, and when they can manage to overcome their natural fear, they're quite curious about us humans! So come on out and give the little guys a show... and bring some squirrel candy in your pocket...
Posted by Admin at 10:27 PM No comments: