The woman called "Lina" who with her two german shepherds has been stalking and killing squirrels in Washington Square Park continues to be a hot item with the New York press. Over the last several days the story has been on Channel 2 News and Fox TV, as well as on several radio stations and in print. Here's a second Daily News article:
http://www.nydailynews.com/ny_local/2010/11/28/2010-11-28_parkgoers_take_sides_in_dogsquirrel_attacks.html

And an article in the Village Voice:
http://blogs.villagevoice.com/runninscared/2010/11/washington_squa_1.php

Reporters and paparazzi are continuing to track Lina in hopes of catching her "in the act". But enough has already been witnessed to convince Park officials and Police of what she's been up to. Seems that she has a date in criminal court in December, and we just heard she's been banned from the Leroy Street (Hudson River Park) dog run, having been ticketed more than once in the process. Be on the lookout: she could show up in a park near you. If you see her letting her dogs off their leashes call the Parks Dept at: 212-387-7676
(Click to Enlarge) 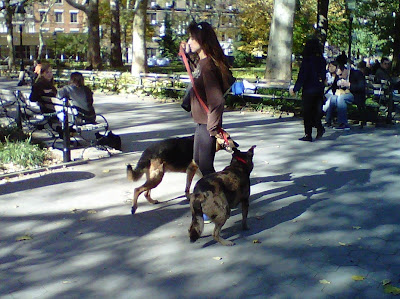