We're in the middle of a brutal heat wave. According to weather.com:
Friday's Heat Rewrites History
The blasting heat wave smashes records from Boston to New York to Baltimore.

The entire  northeast corridor is under the dome as they call it, a high pressure area sitting over the east coast right now. The dew point - the amount of moisture in the air - raises the heat index. The heat index is what it feels like, rather than the actual temperature. But actual temperatures are high enough. Here in New York City it's been as high as 101. It hit an all-time high of 106 in Newark NJ, and 110 in Washington DC, where it felt like 120 with the heat index . This oppressive heat has been here for over a week.  The heat has so far claimed about two dozen lives. Ozone levels are at unhealthy levels across the entire northeast.  Here in New York City we're experiencing what they call the Urban Heat Island effect - where the concrete and asphalt warm up faster and keep the city hotter.

Today, Saturday, was another scorcher. The wicked heat will continue to stick around for the rest of the weekend. I couldn't bring myself to go out to check on the squirrels, as they've been warning people not to go outside.  I imagine most of PCV's weekend squirrel feeders are enclosed in their air conditioned apartments and not venturing out, so not sure anyone will be feeding the little fuzzies. And would they even want to eat in this heat? Probably not.

Will Spunky's babies survive the heat? I hope the squirrels are getting water. I hope PCV is generously turning their sprinklers on.

Last Wednesdat was the last time I was at PCV, and it was a really lovely day even though it was hot. There was a (slight) breeze blowing to temper the heat, and the sprinklers were going off all over PCV, making it feel semi-cool. The grassy was dewy wet everywhere. Squirrels were romping about. It was a summertime dream.

I ran into a bunch of "the ladies" sitting by the fountain and feeding sqs, who assured me that they had the fountain area covered. So I concentrated on Spunky's area over by the east flagpole, and of course, on Patches.

I had fun with Patches, who came over to play by the benches near the playground. 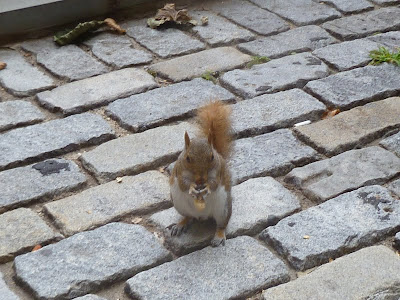 Today he was so glad to see me that he jumped up on my bench for the first time ever! 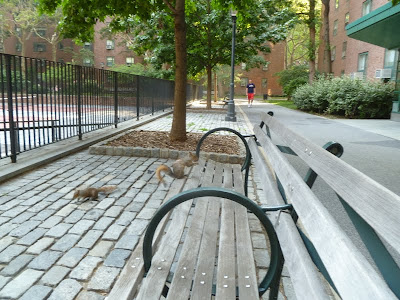 We're making progress,  even though a bigger squirrel soon jumped up and chased Patches off the bench! He's still a little guy, and as you can see in this picture of him and a  pigeon. 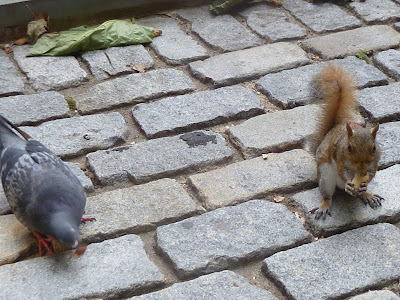 I don't like the way his scab is looking. It's not even a scab, but still open and raw, and under the skin around the edges you can see more stuff getting ready to erupt. 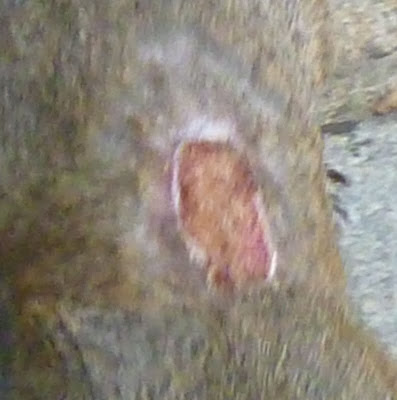 And he also has those other little spots. I think if we're going to help him it should be soon. As he gets friendlier and less wary, he may become easier to catch. I hope he's surviving the heat.

I finally worked up the nerve to go out in early evening. It was not that bad. I made the rounds, dispensing cool grapes and cherries as well as water. Patches came running out to say hi! Most of the squirrels were not interested in the water, semi-interested in the cherries and grapes, and mainly interested in getting a peanut! Not sure if I saw Spunky. A small black squirrel ran down her tree, took a grape, then ran back up the tree. I think it was she.
Later some other squirrels came around but not Spunky. Hope she and her babies are ok. Do squirrels get dehydrated in the heat? Worried about the babies. ﻿
Posted by Admin at 6:01 PM