Has Spunky gone mad? Is it possible that the stress of the horrible heat while nursing her babies has made her mad? Here's what I'm thinking. First of all, she is not as easily recognizable since she gave birth, as she is very small now with no nipples protruding. Of course there is still that cute little face with the popping eyes that gave her the name "Spunky". 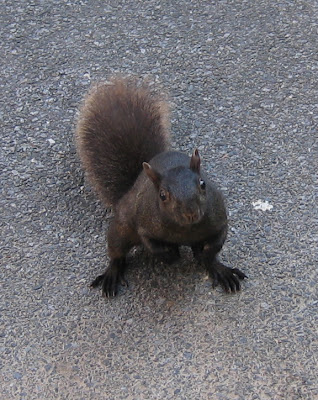 So yesterday I wasn't absolutely sure, but thought it was she when a small black squirrel fitting her description came running down the tree where her babies might be. She took a single grape from me, then disappeared back up the tree.

Later, when all the squirrels were gathering by the flagpole for a food fest,  I was sitting on a bench, and a squirrel that looked like Spunky jumped up on the bench with me. So far so good-- that seemed like Spunky. But then a puzzling thing happened. When I proffered a cherry she was too afraid to take it. I thought that was strange, and decided to put the cherry on the bench with a couple of loose nuts and to sweeten the deal, a peanut. I then witnessed some rather weird squirrel behavior. The squirrel who looked like Spunky would creep up to the food, stick out a paw to almost touch the food, then withdraw in a cringing motion. This theatrical drama went on for quite some time. I was still asking myself if this could really be Spunky, or was it just a squirrel that looked like Spunky? And if so, where was Spunky? I didn't get an answer, and the squirrel never took the food from the bench, although it did keep trying.

Back I went the next day in search of Spunky, as I was worried about her and her babies in this still terrible heat.  I saw a black squirrel sitting on "Spunky's Branch" -- the usual branch that she sits on while guarding her babies, who are presumably tucked safely into the hole at the end of the branch. This had to be Spunky. I kept calling her name and waving, but she would not come down. And that was so unlike Spunky. 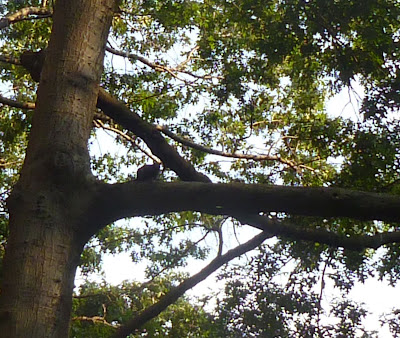 Meanwhile. I was gathering a small group of recruits who wanted to help feed the squirrels. 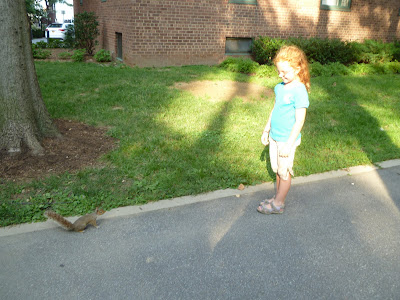 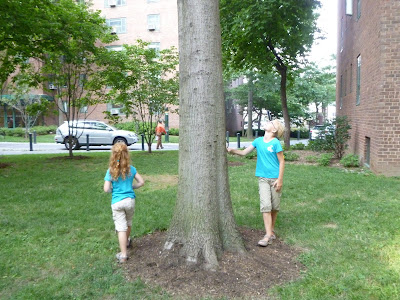 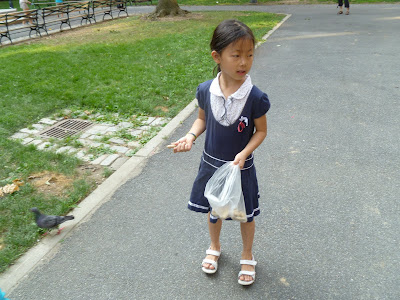 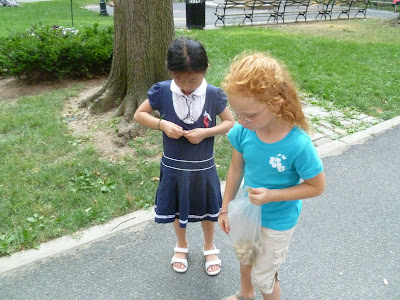 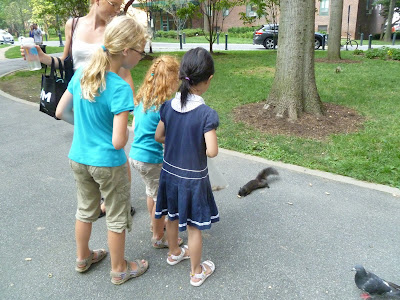 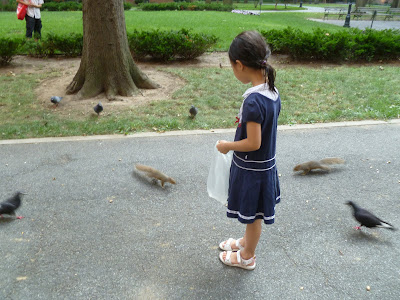 Spunky remained up on her branch, watching the show. A while later she finally descended to join in the chaos and commotion of the feeding frenzy. I immediately offered her a cherry. She reached up and plucked the cherry from its stem, but then let it drop to the ground. Could this really be Spunky? The Spunky who would once eat anything that I gave her?  Spunky " the bottomless pit"?

So then I tried offering her a walnut, which she sniffed with disdain. Now I was starting to think she'd gone crazy! Okay, it was time to get out the heavy artillery, pull out all the stops, get out the peanuts!  One of my recruits offered her a peanut and Lo and Behold -- she ignored it! Ran right past it.  Now we know for sure that Spunky is certifiable, right? No red-blooded American squirrel in its right mind has ever refused a peanut to my knowledge, even if just to bury it.

I was wondering if perhaps Spunky had become dehydrated, so I set down a little dish of water nearby, but she did not go near it. Instead she chose to propel herself at a big gray squirrel that had been minding its own business AFAIK. After the mid-air collision with the gray squirrel, Spunky ran back up her tree. End of Spunky for the day. So what's going on with her?  I wish I knew. I was thinking that maybe the gray squirrel had been trying enter the hole where her babies were, but her attack had seemed to come out of the blue.

I also saw a scary sign that her left cheek (the one that had blown up with an infection before) looked like it might be getting bigger. It could be that the stress of the heat and having to nurse the babies has brought her sickness back. I hope not.