Turned out I was wrong about Spunky: she wasn't sick, just molting.
﻿
﻿﻿

This was one time I was glad to be wrong. When the bare spots appeared last week I got worried. But it turned out that Spunky was merely molting. Fur is filling in the bare spots now, but this time it's black fur. 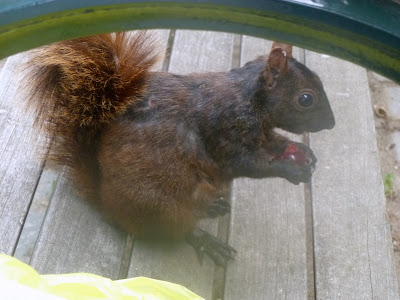 Spunky is in the process of going from her glorious auburn phase back to black. 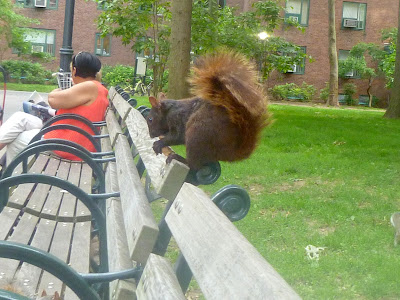 Grey Momma
Meanwhile I was having to deal with Gray Momma's black mood.

Speaking of chilling, I received a rather chilly reception from her today. She was totally ignoring me. Quite a switch from the last time I was there, when she was practically climbing all over me. When I tried to give her a nut, instead of taking it as she always does, she stuck out her paw and knocked it out of my hand! When it fell to the ground she wouldn't pick it up. She refused to eat anything I offered her, and just stayed by the base of the tree, eating up whatever I had thrown there for her babies. If I offered her something she disdained it and immediately looked around on the ground for a peanut or piece of coconut she could grab.

Oh wow, what had I done to deserve the cold shoulder? The only thing I could figure was that I was being punished for not having been around for the past few days. Squirrel psychology is so interesting, and anyone who has ever had a pet squirrel knows what I'm talking about.
Posted by Admin at 10:42 AM