It will take time to say goodbye to you. 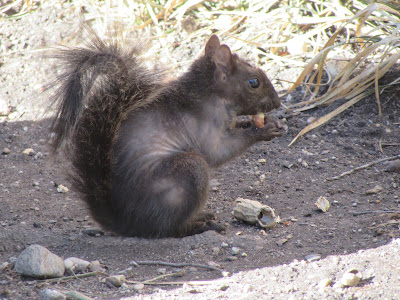 So far I can still go over to Peter Cooper Village, even though a nasty female guard escorted me off the property the other day. But today when I went over to see how the squirrels were doing, I was approached by another guard who seemed more understanding and even apologetic, saying that he only came over because he received a call from a resident. So this is what it has come to: as the good residents of Peter Cooper Village are out walking their precious dogs that pee and poop all over the walkways, they're also acting as spies and informants, turning me in to the local gestapo. 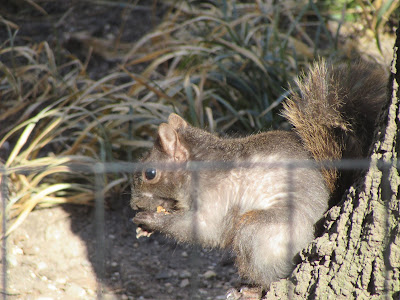 What's going on right now is pretty scary. There's a certain feeling in the air that seems to be catching on. Squirrels have turned into monsters.

The other day I heard a boy who was playing on the green that the squirrels inhabit (you could say it's part of their "habitat" as one guard puts it) and he kept yelling loudly, "STUPID SQUIRRELS!"

Then yesterday a few teenage girls were walking by and I heard one of them talking about how "A squirrel attacked me!" Really???

I keep hearing about squirrels jumping into baby carriages and biting children.

I see people stop in their tracks and deliberately distance themselves by carefully walking around the squirrels, giving them a wide berth.

I hear people cautioning their children to not get too close to the squirrels.

I'd also add that the squirrels I see and interact with are not aggressive. As prey animals, not predators, they tend to be very shy and nervous, jumping at the slightest sound, even at the rustling of a plastic bag. For the most part, they will politely wait for you to throw them a peanut. If it is not forthcoming they will attempt to communicate with you by looking at the ground, pawing it a bit, then looking up at you, then looking down at the ground again. It's like, "You know what you're supposed to do!" Now that is hardly what I'd call aggressive behavior. 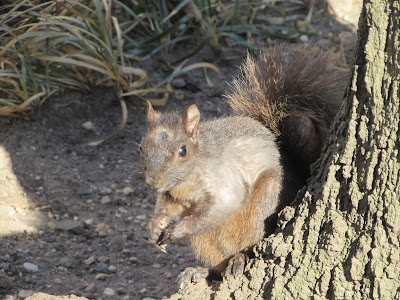 The squirrels must stay in their habitat (behind the fences) or they will be a discomfort of the good residents of Peter Cooper Village. Reminds me a little of Alfred Hitchcock's "The Birds".

As for the squirrels, it hasn't dawned on them yet what's hit them.

As for myself, I never guessed it would be so hard on me. I've begun to realize that all the time I thought I was doing the squirrels a favor by feeding them, they were actually functioning as emotional support animals.  They were my therapy squirrels! I had become so bonded to the daily ritual of  interacting with them, that cutting the cord is coming as a real shock.

And, of course, they were the focus of this blog. But the world as we knew it has changed. Whether this blog will continue is now in doubt, but for the present, I'll be posting a few thoughts as I start saying my long goodbye. 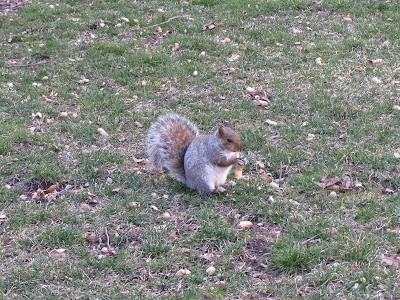