Midnight in the garden of evil 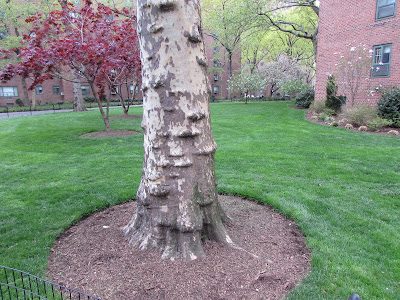 I stopped by Peter Cooper Village to see how things were going in the garden of evil. The place looks beautiful now, in the early Spring. The grounds are manicured. Not a peanut in sight.  Not a squirrel in sight.

But the foulest stench pervades the entire park. They've started spreading that awful fertilizer on everything again. It's a mixture of poop smell and chemicals that makes me gag and start getting a headache and feeling nauseous. I can't stay there long, I have to exit the property. Don't others have this reaction and complain? Oh yeah, these are the people who voted against the squirrels, so you already know they're out of touch with reality. I's particularly beautiful time this time of year, but without the smells to go along with the sights it's a sort of travesty. There should be the delightful smell of trees and grass in the air, but instead there's the sickening odor of poopy doo. And what about the squirrels? Does anybody think about them? No, of course not. They have to smell that crap all day and all night long. And they have to dig in that crap. Oh that's right, there's nothing to dig for anymore.
On top of that, they are wondering where their next meal is coming from.
A squirrel's life has become a nightmare, as I see it. Please tell me I'm wrong.

This little one came out to greet me on the sidewalk, so I threw him a peanut from the stash I carry with me now in case I run into a stray squirrel on the sidewalk outside of PCV. He has open scabs now. When I started feeding him he had a little bit of mange that would easily be cured with good nutrition. Now that I no longer feed him, he's looking worse. 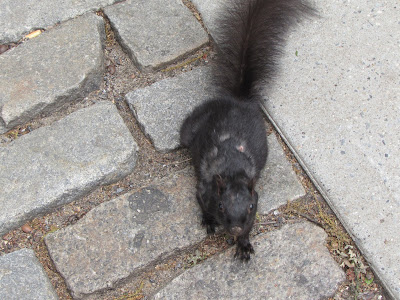 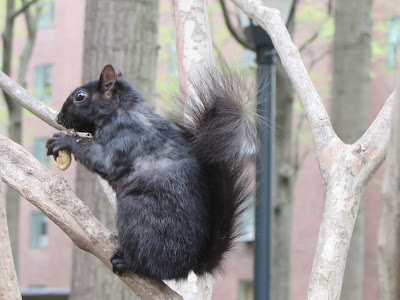 It's so cruel, so sad. But they got what they wanted. It's midnight for the squirrels.
Posted by Admin at 11:12 AM