Last weekend -- the last one of the summer-- was perfect weather, with cool sunny days and crystalline blue skies. This summer was a classic, being not terribly hot. We did not have temperatures in the 90's until mid-August, and not that many of them. Now as we near end of September, there's already a chill in the air. I went over looking for Tubby today, over in the east end of the park where the reds have a little niche-- their own parklet with some great trees and lots of clover and flowers. Last spring it was loaded with wild strawberries because they never mow there.

This is where my friend Tubby resides. She's the matriarch, having mothered several generations of reds. At first I didn't see her, after calling for her as I used to do (and she'd always come running like a dog). Then I heard that terrible crying that sounds like a squirrel in pain. You normally hear it in the wintertime when a squirrel gets really cold. I looked all around for the source of such pain and finally spied a small squirrel figure up on a branch of Tubby's old tree! I threw some nuts up against the trunk and sure enough the crying ceased immediately and the squirrel came bounding down. It was Tubby!


The acid test is that Tubby comes over and eats out of my hand, which most squirrels do not do. I was glad to see she was okay, but she was certainly acting skittish. She seemed scared and when she took the nut I felt her claws, which was unusual for gentle Tubby. No doubt about it, Tubby was miffed. I guess that's because I've practically ignored her all summer, having been occupied in the west end of the park with various problem squirrels over there. I also knew that the squirrels in Tubby's parklet were being well taken care of by a certain Russian gentleman who throws nuts out his window. I met his daughter one time while she was walking her dog. Her dog was a breed trained to be a hunter, and she told me he'd killed a squirrel when she let him off the leash. Since he does not bark, the squirrels walk right up to him. I was telling her that I have names for all my pet squirrels and she told me that they also have Russian names, because her father does that too! So, Tubbelinka...

I have known Tubby longest of any other squirrel. Others that I was fond of, like Ruffles and Dolly, have disappeared. Tubby got her name because the first time I saw her she was so rolypoly that she had to waddle over for nuts! She was a beautiful red-brown color but fat and insatiably hungry! It took me a while (I was still naive) to realize that she was very pregnant! And since then there have been loads of baby red squirrels that eventually turn to brown or black. Well yesterday Tubby looked quite svelte, but definitely well-fed and not too hungry. Just in a pique. She will have to be wooed.

Here's Tubby with some avocado on her nose: 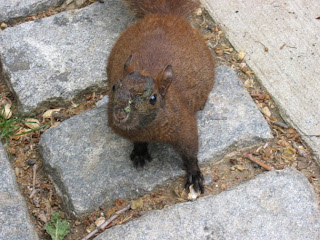 The squirrels in the middle parklet by the cherry tree do not get fed as well, so I've been spending time over there. I fed them yesterday, but missed seeing Golden Squirrel, so-named because she is an unusual golden color. She is not red, brown or black, but a mix of white and gold shades. She started out having a round hairless spot that looked like a small pinwheel, which kept getting bigger until it covered her entire right rear. But that has pretty much healed now. I'm concerned because I haven't seen her in a while and she wasn't around today.
Posted by Admin at 11:14 AM