The Madcap Adventures of Sonic the Squirrel

She's called  Sonic because she moves at the speed of sound. She's so loaded with
energy that you to want to get out of her way when she's coming at you! 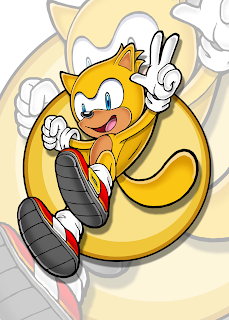 For her first release she was taken over to our very own Rodentropolis, where she was supposed to spend an hour or two before being brought home, but she soon disappeared and was not to be found anywhere. Her distraught keeper searched in vain for her and had others looking for her too, but to no avail. Where could that squirrel have gone?

He surmised that she might  have gone into the basement of a nearby  building, where there were a couple of  doors that have been open since Hurricane Sandy. Guards are stationed at each door, but when she moves she is a blur that is barely distinguishable to the human eye, so she could have whizzed past the guards and entered the building.

He got permisson to go in  to look for the squirrel, but did not find her. The basement was a large cavernous area with many passages and rooms. She could be hiding anywhere.  Then he got the bright idea of setting a trap. If she was in there she would be awfully hungry by now. He got permission to set the trap, and the next day he went back and discovered that the trap had been sprung! All the food had been eaten, but no creature was there!  He guessed that some good samaritan had found the squirrel  in the trap and released her, then after  realizing their error, had re-set the trap, but without setting the hair trigger spring.

The trap was once again filled with food and re-set, with a reward posted for the return of the missing squirrel. A few days later he was informed  that his squirrel had been found, and was now waiting for him in a holding cell in the basement! It was a longshot that had paid off.

Sonic's next adventure was at my place, where  I offered to take her for an overnight, as the next stage in her release program. After she arrived she immediately went into another dimensional vortex which was located somewhere in my couch. But even when we tipped the couch on its side, we were unable to find her. Ensconsed in her secret world, she was as still as a statue and did not stir for the next 12 hours.

The next day little growling noises were emanating from my couch.  The growls began to sound more like moans, and I could tell that this was one unhappy camper. This set me to thinking: can a squirrel be unhappy in the same way that humans can be unhappy? Are there things that matter to a squirrel beyond survival? This squirrel was not being exposed to bad weather but was in a warm, cozy spot under my couch. Nobody was bothering her and she had plenty to eat: the nuts and fruits that were being placed by the couch were disappearing.

She had everything a squirrel in the wild could want, and yet she was still complaining!  This reminded me of the human condition: never content, always searching for something. It's fascinating to find the same psychology in a squirrel.

Later, when her keeper came to pick her up, Statue the Squirrel  turned back into Sonic the Squirrel, leaping joyfully from underneath the couch to jump on him! 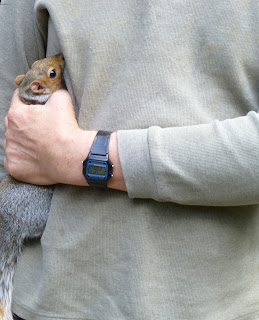 All that pent-up energy was suddenly being released, and she then turned into Super Badnik and started racing around at top speed, breaking a vase in the process. Her manic energy lasted for days before she finally calmed down.

What does this say about squirrels? Well for one thing, there's more to a squirrel's life than just  a roof overhead, a warm nest and food security.  We tend to worry about those things for our squirrels in the wild, but when we get them out of the wild, we observe other behavior, a different dimension...

I'm wonderinf if a squirrel like Sonic will ever be able to adjust to living in the wild?
Posted by Admin at 3:36 PM