The time had come to start a soft release program for Babygirl. Here she is back in May: 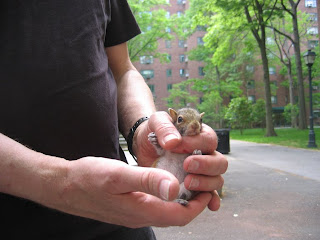 Babygirl
Today she's a total dynamo, strong and muscular and built like a sumo wrestler, a proud testament to her dad's Kozy Shack infant formula (which consists of Kozy Shack tapioca pudding and hazelnut milk).
The babies love it and lap it up. And the recent addition of some delicious cuisine minceur - fresh, locally found baby acorns -  has rounded out her powerful physique. When she visited my place a few weeks ago it was non-stop energy all afternoon, with her running back and forth and jumping up and down--  even on me!  After she left I was so exhausted from watching her that I needed an immediate nap.

What to do with all that pent-up energy? Perhaps it was time to introduce Babygirl to the Great Outdoors. So her dad took her over to Peter Cooper Village, having decided that it was an ideal environment. It's truly a squirrel's paradise, with big, shady trees, plenty of hedges for hiding and great lawns for foraging. Plus many Nice Humans for frequent feedings. And the weather has taken a turn for the better these days, with an endless series of golden autumn days. So it's the perfect time and place.

Come out, come out! 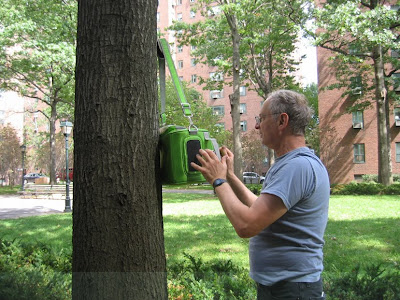 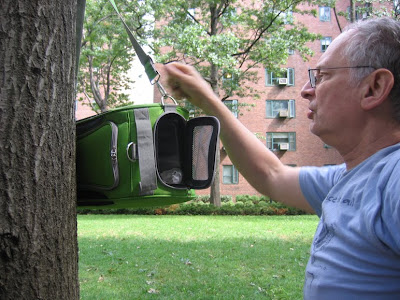 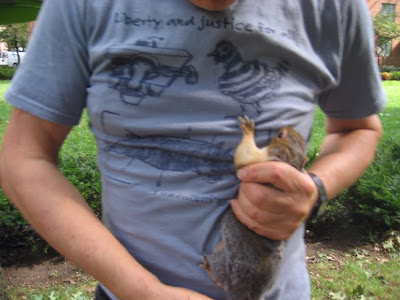 It did take some persuasion, but her aggressive and dynamic nature took over, and soon Babygirl was cautiously exploring the hedges, checking out the lawn beyond and running up and down the trees just a little ways. She didn't go very far up which was good, because once we heard a PLOP! and saw that she'd actually fallen from a tree. Luckily no harm done. Climbing trees was a learning experience for Babygirl, and we could see that she was climbing a bit hesitantly and awkwardly. She had been rescued before her eyes had opened, when she would have still been in a nest. Apparently climbing trees does not come naturally even to a tree squirrel! Who knew?

Babygirl spent a while getting used to the territory and the other squirrels that were milling around. She became fairly relaxed and even started burying nuts (her favorite activity).

That was fun Dad, but can we go home now? 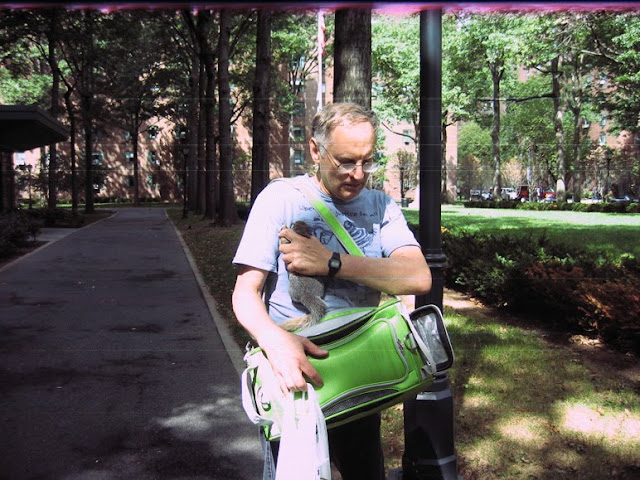 After her first day outside, Babygirl gets to go home.