Bernie arrived with a long pole that  could be used to dislodge the dead squirrel from the tree. 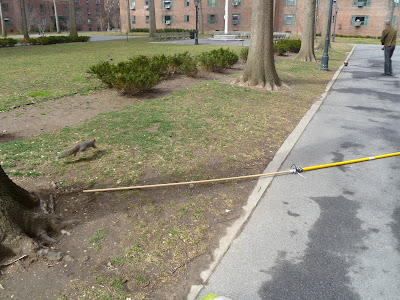 He poked around up there. 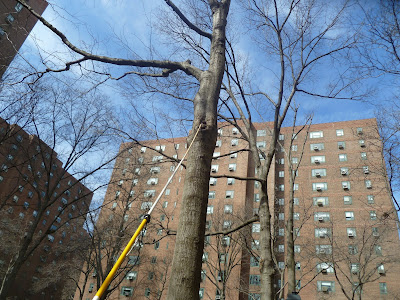 In the morning light we could clearly see that there was no squirrel there, and not even a hole really - just a small dent in the tree, above which, by the real hole,  a black squirrel sat watching us. Spunky. 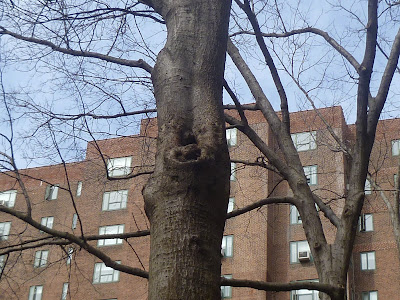 Had yesterday's squirrel been a figment of my imagination? I could have sworn I'd seen a tail, a face -- eyes, nose, mouth. Had the play of light and shadow made it look like a squirrel that was not really there? A mystery, like the disappearing cheshire cat.

Next we tried to get Spunky to come down from the tree but she retreated into the hole.  So Bernie got the idea of sending up a peanut. He taped the peanut to the end of the pole. ﻿﻿
﻿

From within, Spunky immediately tore both the nut and the tape from the pole! We then proceded to serve up a few more. She had a decent lunch.

But Spunky never came out of the hole again. I checked back later in the day,   but there was no sign of her. At least I knew that she'd had some peanuts. We're trying to understand Spunky's strange behavior. Why does she stay in the hole or sit outside the hole and refuse to come down? And when she does come down, why does she soon hurry  back to the hole? We still don't know if there is a nest of babies in there, which is about the only thing that would make sense. But she hadn't looked pregnant before and doesn't look like she's nursing now. There is still a mystery to be solved with Spunky.
Posted by Admin at 9:54 PM