Spunky's strange story continues. If you've been following along, you know there's been quite a mystery about what's going on with Spunky. Today things got even stranger.  Just to recap, shortly after Spunky was discovered to be having hair problems, she disappeared. I was afraid she had died and then miraculously, she appeared two days ago, just as Bernie and I were leaving the park after the second of two feedings that day.
http://thenewyorksquirrel.blogspot.com/2012/03/spirit-of-spunky-squiggy.html

We could hardly believe our eyes, but it was definitely her! She ate exactly one grape and one nut, then ran away, back up into her tree. This seemed like strange behavior. The next day when I went there again, and Spunky was the first squirrel to come over to me. It was almost like old times: she hopped up on the bench and ate like she used to. But she only ate a few nuts before hopping down and running back up her tree. Bernie suggested that her strange behavior along with the sudden strange hair loss, might indicate that she'd had babies. I agreed, although I had not noticed that she looked pregnant.

But things got curiouser and curiouser. When I arrived today there was no sign of Spunky on the ground. I went over to her tree and kept calling her name. Then I thought I saw her up there by the hole looking down at me. Or was she sleeping? I took a picture and when I got home I was able to clearly see the face of a squirrel. See if you can see it (click to enlarge): 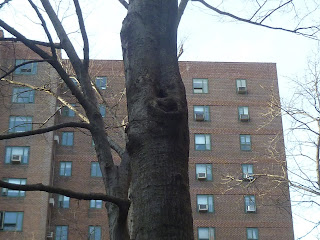 I must have played with the other squirrels a good 45 minutes before Spunky finally came down. She ate a few nuts. 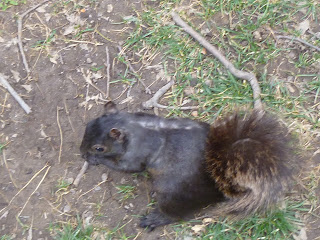 Her back looked better, I thought -- no open sore this time. I decided to give her a special treat: a peanut butter cracker! In typical squirrel fashion, she ran off with her treasure: back up the tree. 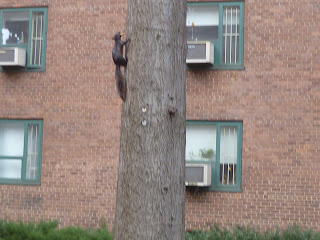 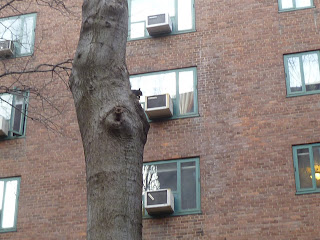 I could see her sitting by the hole eating her cracker. It was then that I noticed that the squirrel  I'd seen earlier was still sitting there. So it hadn't been Spunky and it hadn't moved. If you look carefully you can see Spunky sitting in the back and the other squirrel sitting in the front. 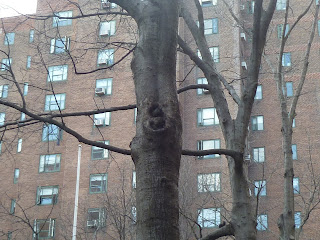 That squirrel had been there all along, and had never moved. I watched it for a while: the tail never moved. In contrast, the black squirrel behind it (Spunky)would move from time to time. I was thinking that the motionless squirrel was either sleeping or dead. Now I wondered if it was blocking the entrance to the hole, and Spunky's access to her babies. She did not seem particularly agitated but she sat there constantly, as if keeping watch.  I could not get her to come down again.
This little tableau was the way I left them when I eventually had to go. By then I was pretty sure that the front squirrel was a dead squirrel. But was it keeping Spunky from getting to her babies? That was the question. Tomorrow we will go back and to see if the "sleeping squirrel" is still there.
Posted by Admin at 9:16 PM