Bernard Goetz Gets a Special Visit on Saturday Night

It was 8pm on  Saturday night. There was a knock at the door and Bernie Goetz opened it to find two uniformed policemen standing in the hall outside his apartment, one of them armed. They were from New York State's Department of Environmental Conservation (DEC) and they indicated that they wanted to come in.

Here's the story of DEC's attempted home invasion, as told by Bernie Goetz in an exclusive to The New York Squirrel:


I believe that DEC came to my home to arrest me. I found out later that they had also come by on the previous Saturday at the same time, when I happened to be out having dinner with friends. They wore green DEC uniforms, and one of them was in swat team garb -- he had on a bullet-proof vest and had a gun in his holster.  This felt like a police raid and it was pretty frightening.

When they knocked on the door I opened it, and was greeted by name. When I asked: "What do you want?" they said: "We're here to check on the well-being of a squirrel."  They told me that they had received a complaint that I had been seen in PCV carrying a large bag and walking around with a net on a pole trying to catch squirrels.  They were accusing me of poaching!

They asked if they could come in and I said: "No way, go f*** yourselves!" Then I slammed the door shut and clicked the lock on super-fast. They remained out in the hall for a long time, attempting to get in while I hyper-ventilated behind my door. They pressed on the door handle and I later found foot marks where they had been pushing against the base of the door.

I refused to let them in because I knew that once they entered your apartment you were screwed. Once you let them in you can't tell them to leave, and they can stay as long as they like, and leave when they're ready. They can go through everything in your apartment, and there's nothing you can do about it.  If you try to stop them from looking at something they can arrest you for resisting an officer! You're totally f***d once you let them in, so I didn't.

They stayed out in the hall for quite a while after that, apparently hiding by the side of the door where I couldn't see them. I buzzed the doorman to find out if they'd left the building, but they hadn't, so I remained on the alert until I finally heard a door open and close out in the hallway. It was the door leading to the stairway exit. They ended up leaving  the building some time after that.

I'm sure DEC wanted to arrest me. They'll arrest you on a Saturday night, take you in and book you when you can't get hold of a lawyer, then you're stuck there for the whole weekend. They tried to open my door but couldn't because I'd locked it. Would they try to break it down? Not without a warrant. If they wanted to pursue this they'd have to go through the procedure of getting a warrant, which could be difficult, since I believe it would require an affidavit from those filing the complaint, and I'm guessing that my accusers prefer to remain anonymous.

But they would have to put it in their log that they had attempted to come in and that I had denied them entry.

Let me explain what I believe has been going on.  I've had trouble before, going back quite a few years now.  It's always been my practice  to rescue sick and  injured squirrels and abandoned babies when I receive calls about them, which happens quite often. If they are badly injured or small I can pick them up with gloved hands, but if they are stronger and frightened, sometimes I do have to use a net. (Ed note: Even that can be tricky. In the pictures below we were trying to get an injured squirrel to feel comfortable about going into the net by baiting it with peanuts. It caused quite a stir among the squirrels, as you can see). 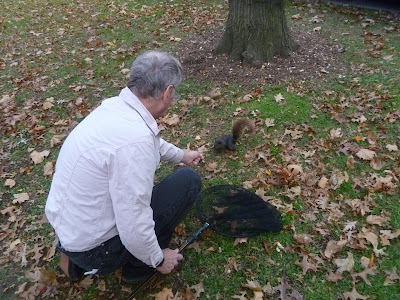 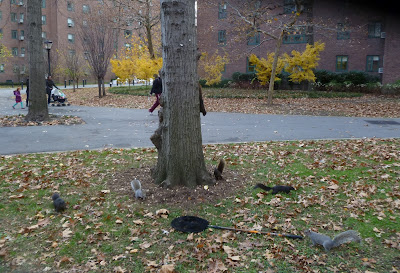 I had picked up a black squirrel once at Peter Cooper Village that was infected and full of pus, and nursed it back to health. A squirrel will normally need to be rehydrated and fed, will sometimes need antibiotics, and depending on how sick it is, may need to be treated by a vet.

After about a week  I brought this particular squirrel back to be released where it had been found. Then the same people who had complained about my feeding squirrels called Security and told them that I was out there trying to catch a squirrel!

I replied: "Well actually I caught this squirrel last week, and now I'm releasing it. If you take a look you can see that the cage door is open and the squirrel is still inside." The guard saw the squirrel sitting in the cage, and said: "Oh I see, you're trying to help the squirrel!"

I said, "Of course! The people who complained about me trying to catch squirrels are the same ones who shout at me for feeding them.  They're not really concerned about the animals, they just want to get me into trouble for some reason." He understood completely. The guards have been aware of this going on  for years now, and know the real story, which is that I'm there to help the squirrels, not harm them.

I think the same thing may be going on this time. The complaint to DEC may have even come from the same group as before. Many people have seen me  at PCV recently with a carrier that I've been using for my pet squirrel Peanuts, who is going through a slow release. 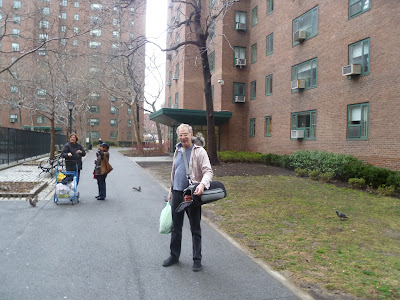 I rescued Peanuts a few months ago after something happened to his mother. He's a young squirrel who is just learning his way around, so I usually put him out there for 2 days, then pick him up and bring him home for 2 days. 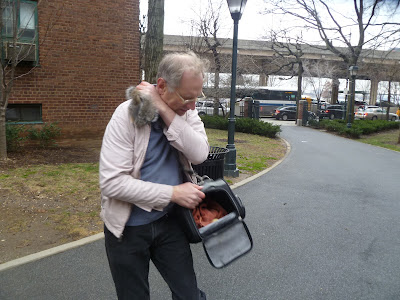 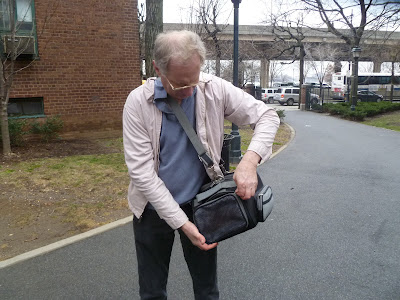 People who have watched me playing with Peanuts tell me that it's the most incredible thing they've ever seen in their lives!
On the other hand, there are obviously some others who have complained. I believe that these people disingenuously pretend to show concern even when they know by now that I'm legit with the squirrels, and that they are simply trying to make trouble.
But I still plan to keep going back there to release Peanuts, in spite of the harassment.  Peter Cooper Village is an ideal place to release a squirrel, and Peanuts has been doing very well there. 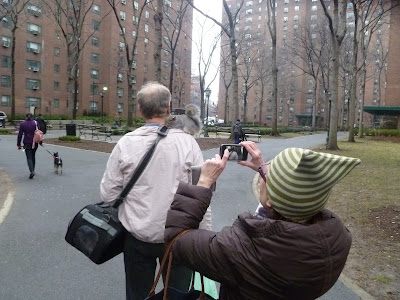