Squirrels: State of the Union


So far the squirrels are doing just fine! I was thinking about how much better off they seem to be this winter than in previous years, when many suffered. We had an unusually abundant nut harvest this year, and they were fattened up and prepared for winter combat early on.

I did see one black one with a bleeding front paw yesterday, but it didn't look too bad. Other years there have been so many with wounds much worse than that. I recall one black squirrel that had a horrible open wound on his leg that lasted all winter. It just would not heal. I always wondered at how much he suffered. When we first saw these wounds we wondered if they were from... hawks? dogs? rats? We finally decided that they were fighting among themselves. I think that as long as they have food security they don't fight with each other.

Also, apart from our "White Christmas", the winter has been relatively mild so far. In fact recently we've been experiencing a "January thaw" with temperatures in the 40's. The squirrels have been responding to the clement weather with frisky frolicking. 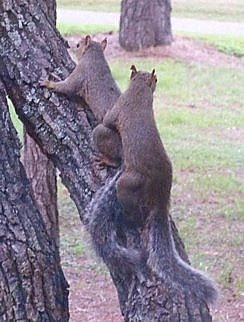 It seems to be converging with mating season!
It's a wonder to watch their agile gymnastics as they chase and evade each other in the trees with much squealing, devastation and delight!
Posted by Admin at 7:04 PM