I noticed a different mood among the squirrels today and put it down to the cold weather. They seemed desperate for peanuts and were jumping all over themselves (and me) to get them.


All of a sudden there arose such a clatter  that I ran to the bushes to see what was the matter! There must have been at least 4 or 5  squirrels tangling in the bushes and it sounded like a murder was in progress. I could literally hear the pouncing, squeaking, snarling and clicking, but couldn't see what was going on. Every now and then I caught a glimpse of a squirrel running at top speed as they appeared and then disappeared back into the bushes. 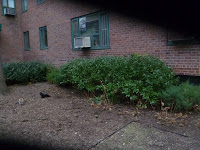 I waded in as far as I could, pleading with them to stop, but to no avail. They were not paying any attention to me. The old ploy of tossing peanuts wasn't working.

Then a black squirrel escaped from the bushes and ran up a tree with several others in hot pursuit, and then back down and into the bushes again. This went on for a while. I thought about all the wounds I've seen on squirrels during the winter months. These wounds are often slow to heal and are especially nasty because of the cold. Yet that's when they appear. I wondered if I was seeing the source of them now, if they fight among themselves because they get so cold and desperate. Were they exhibiting existential angst?

Things finally calmed down and I went back to feeding the other squirrels.
Soon I noticed that one of the black squirrels was being chased up a tree by a gray squirrel that was flicking its tail and making clicking sounds. Thinking that this could be a resumption of the previous attack, I threw them some peanuts in an attempt to distract them. The black squirrel took one and began eating. 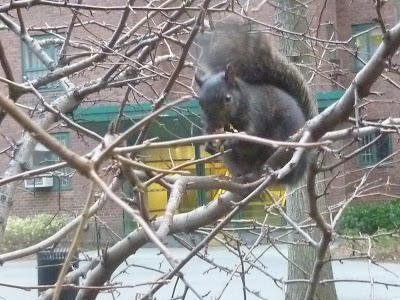 The gray squirrel however, was too intent on harassment, and ignored the offer: 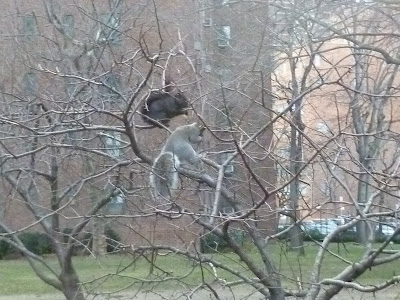 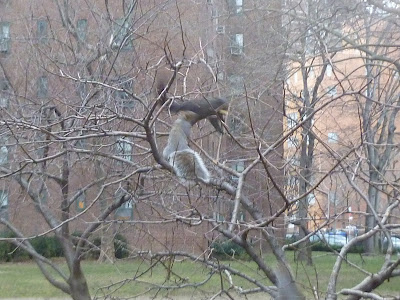 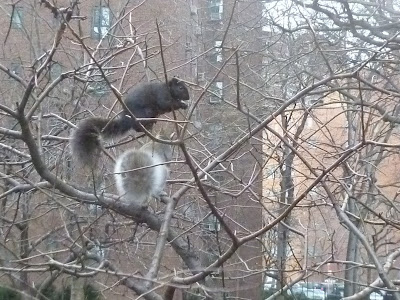 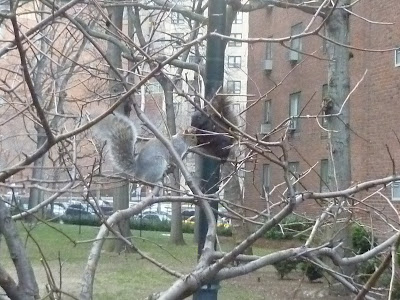 Although he did take time out to gnaw on a branch with buds on it: 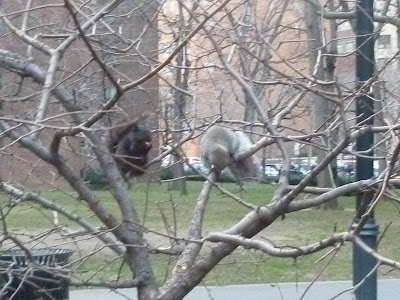