Sympathy for the Devil

I've already expressed my feelings about breeding hawks in New York City in my blog on Violet: http://thenewyorksquirrel.blogspot.com/2012/01/violet-red-tailed-hawk-dies.html

Having said that, I must admit that in the past 24 hours I've fallen totally in love with the hawks of Washington Square Park - - thanks to the amazing series of pictures on the Urban Hawks and Roger Paw blogs.

I became absorbed in the story of Violet and Bobby and their baby Pip and the wonderful newcomer, Rosie. And I fell in love with the medieval aspect of hawks being posed against dramatic cityscapes. These pictures are works of art in my estimation, in the way they juxtapose the beauty of nature with the architecture of man. Absolutely stunning!
﻿ 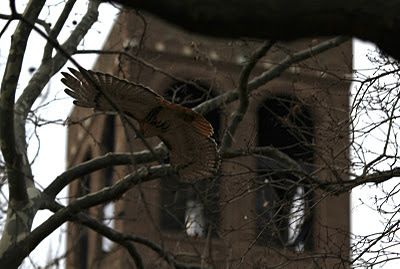 I urge everybody to have a look for themselves:
http://urbanhawks.blogs.com/urban_hawks/
http://rogerpaw.blogspot.com/

I still believe that these birds exist in New York City as a product of our own conceit. But one could also say that about squirrels, I guess. The only true natives here are the rats.  Speaking of which, it seems that the hawks are performing the needed function of keeping the rat population down in the park. There seems to be some concern about the use of poison  harming the hawks, as well as other birds and the squirrels.  I say, why not use nature's perfect contraception -- the hawk? Why use poison at all? I'm talking about keeping the rat population down of course, not the squirrels. We all love the squirrels and appreciate them as a New York City treasure. Interestingly enough, I noticed that the hawks seem to be hunting rats rather than squirrels. I know they also hunt pigeons. But rats and mice seem to be their preys of choice.