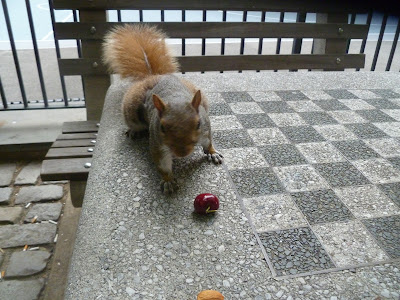 I've been spending time over in the ball court area, waiting for Brownie or Mother Red Tail to show up. Neither does. I need to face the fact that they're gone for good.


But what happened to them? I've been trying to figure it out. I haven't seen either of them since before that terrible heat wave we had a few weeks ago, when I did not go out at all during that time, which lasted at least a week, maybe more like 10 days. Did they die during that heat wave? If so, why? Did  they die from dehydration or lack of food? Was it my fault?

I heard that there had been about 12 rat sightings around  the ball court area. Had the squirrels been poisoned? I have no evidence that they laid down poison, but it's just a thought to try and figure out how two young and healthy squirrels have disappeared.  Not only them, but other squirrels in the area. There are very few squirrels to be seen over there now.

The babies would have been still very young when the heat wave hit. They must be all dead now, along with their mother.

From these pictures, you can see what a beautiful squirrel she was. 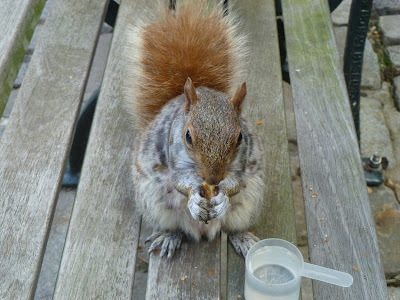 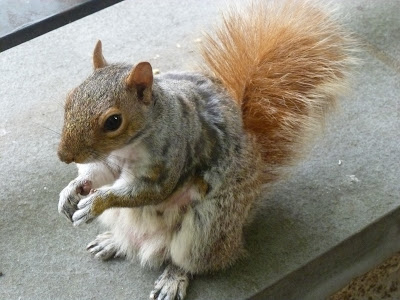 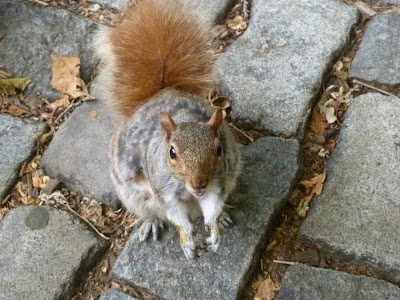 She had a really great personality. We didn't have time to develop a strong relationship (like what I have with Spunky and Alphie), but I think we would have eventually. She was special. She was as soft and sweet and cuddly as a kitten or a puppy. But she was a squirrel, not a housepet, and ended up suffering the brutal fate of a squirrel. 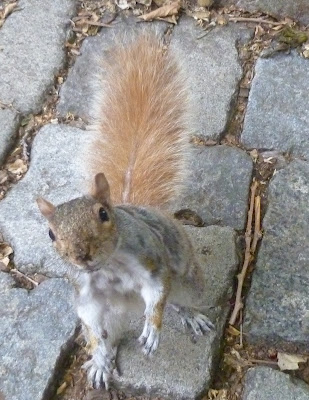 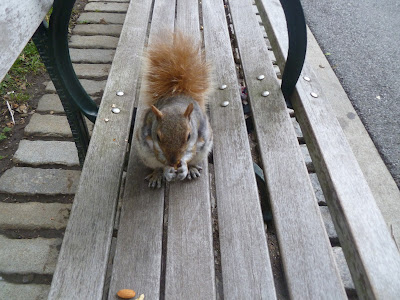 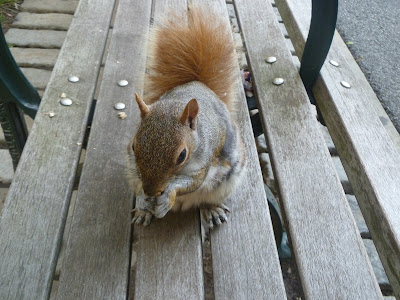 Needless to say, I am heartbroken. I blame myself  for staying away during that terrible heat wave. I think the squirrels depend on us for food. Feeding squirrels is fairly controversial at Peter Cooper Village. Some tenants complain that the squirrels should not be fed, but they fail to take into account that these squirrels, while living in the plush surroundings of PCV, do not live in a forest, and thus do not have access to the multiple food sources in a forest. I believe that they do depend on us for food. I have seen the results of neglect over and over again. This was a very short period of time -- about a week to 10 days. I'm guessing that she was unable to feed her hungry babies due to dehydration from the heat and lack of food, and ultimately could not survive herself.
Posted by Admin at 1:24 PM