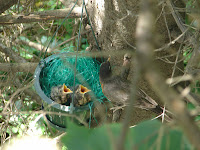 A friend's cute baby robin story.  There are some great shots. Enjoy!


Saturday, June 30
These little guys were on the ground under my spruce tree,  just a few feet from where I was sitting by my BBQ. 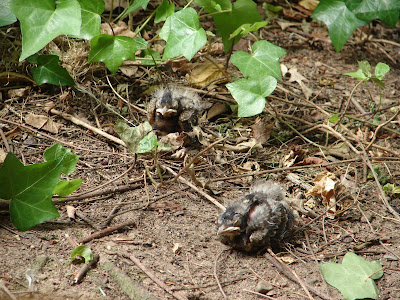 They looked too young to be out of the nest so I got a plastic hanging planter and some Easter grass and put them in.  Mom and Dad were not too happy with me handling their babies, and were flying in my face, so I moved quickly to hang the basket on the first limb I could get to.

I could not find their nest so I used the planter. After they were gone, I found out that it was because I was looking in the wrong place... they were actually on the ground directly below the nest, but it was VERY well hidden.  It was also very shallow. In retrospect, I may have been partially responsible for all this, as the nest was on a limb on which my wisteria was growing.  I had pulled it out of the tree in the spring, at which time the robins did make a fuss, causing me to look, but I could not see any nest.  I may have damaged it at that time...

The babies were moving around more (in my basket) this afternoon, so I was trying to get some good shots when Mom flew in. I just kept snapping. 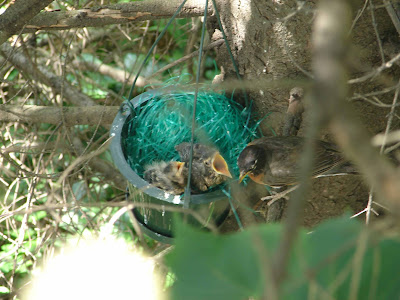 Monday, July 2
Two bird rescue organizations and Audubon finally got back to me and said that based on the Saturday pictures, the birds should not have been out of the nest... too young.  I got varying opinions about how much longer they should stay... ranging from two days to one week.  My cat Princess loves to go prowling around outside, so I thought it was safer for them to be up in the tree. Poor Princess would have to stay inside until they could fly, which would be at least 3 days after they left the nest.

I was hoping for today! And guess what... there was only one bird left in the nest. By tomorrow, I figured it too would be out.
ps. I kept Princess inside all day : ) 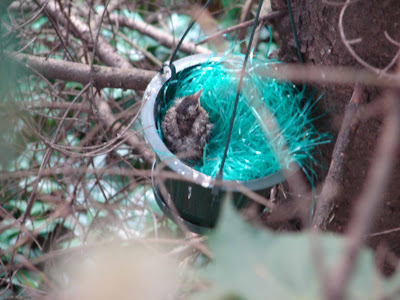 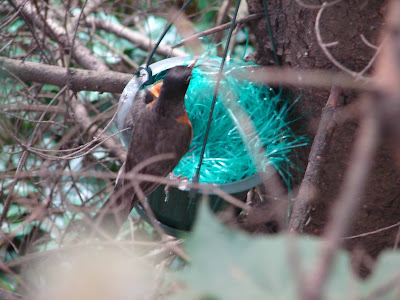 Thursday, July 5
Baby Robin #2 was still in the nest and still being fed.

I finally spotted big brother (who dropped out on July 3rd) in nearby bushes -- I had believed he was there, but needed to see him to rest at ease...


His brother had moved over one bush from where I took his picture, but was still around.

Saturday, July 7
HOORAY!! Baby Robin #2 was OUT!!!
I wanted closure for everyone, but could not find them.   So this evening when it was cooler, I just sat and listened.  I heard mama and baby and moved over to where I believed the baby was.   And sure enough, there was Baby Robin #2! He was in my little wisteria tree (not very high from the ground).
I was sure his big brother was much higher in the trees by now.