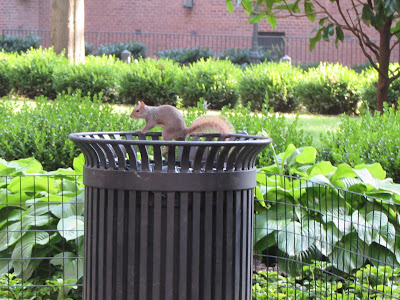 New York City's proposed prohibition on feeding squirrels has not yet gone into effect, but it seems to be already having an effect. According to a recent article in the Gothamist:

"NYC Park Visitors Warned About Hangry Squirrels Out For Blood"

According to a Parks official,  there's been a string of squirrel attacks recently, which would indicate that there are lots of hungry and angry squirrels out there. Well, I've seen some hungry squirrels at Peter Cooper Village, but I have yet to see any angry squirrels. Only sad and scared squirrels. And I've noticed something curious: some squirrels appear to have almost internalized the new ban on feeding them there, and skulk around as if eating a peanut is a punishable act. Somehow they know. So sad.

Some squirrels have taken to diving into the trash cans. 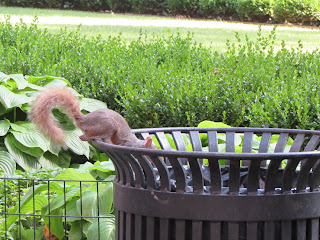 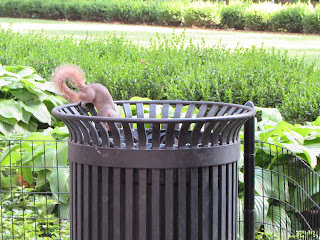 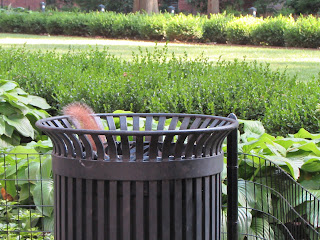 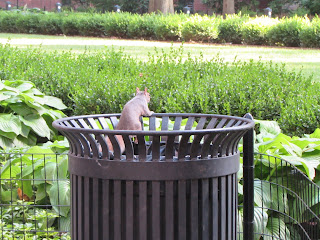 This squirrel dove in again and again, each time coming up with a little nugget in its mouth. Wondering what it was, I looked in and saw a bag of chips!

I saw a squirrel eating an entire sandwich right through the saran wrap. Another squirrel was chewing on a napkin.

I found my precious pet Lady Black with this plastic cup around her neck. God knows how that happened. She could have been wearing it for several days before I found her. She wasn't able to get it off herself and seemed very agitated. I quickly helped her and she now loves me even more.
﻿