Bernie Goetz, the squirrel rescuer, told me that my Dolly likely died of an infection that could have easily been healed. I'm sick about it, as Dolly trusted me and no doubt thought I was curing her with all the goodies I brought her. And I could have been, if I hadn't been so STUPID!!! I assumed it was some kind of congenital abnormality and did not report it as problem. She seemed well and had a healthy appetite. I had no idea she was at death's door.

Now there may be another squirrel with a similar infection, this time near the eye. This little black squirrel had what looked like a small eye infection for a few weeks, which has suddenly blown up: 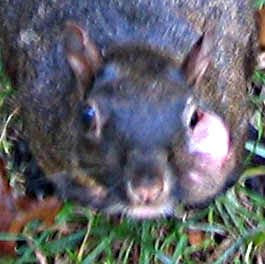 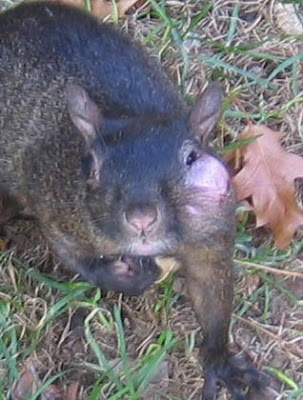 Bernie and I will go there tomorrow and try to catch it so he can administer an antibiotic. I hope it makes it through the night.
Posted by Admin at 4:46 PM