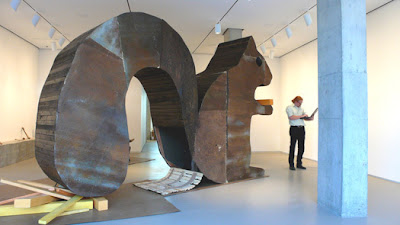 This amazing squirrel sculpture will be a centerpiece of the inaugural show that opens on Saturday Nov. 6, at the Lombard-Freid Projects in Chelsea. The show includes a video interview with Bernie Goetz, and 150 canvases embroidered by a group of Costa Rican women commissioned by the artist, William Earl Kofmehl III, who lives and works between Pittsburgh, Pennsylvania and San Luis, Costa Rica.

The wooden sculpture of the giant squirrel becomes a backdrop for a series of performances enacted by the artist and his cast. Characters played by various members of the Kofmehl’s family and friends perform a script that conflates the Greek myth of Narcissus with the artist’s own Wikipedia explorations. Read More
Posted by Admin at 10:34 PM