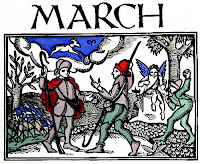 We had a terrible storm of snow and rain on Wednesday. All through the night you could hear the hail beating against the windows.  Alongside that we have the buds on the Japanese cherry trees ready to burst into bloom, and the other cherry trees already flowering. And the purple crocuses peeping out of the ground. What a strange time.

I've been worrying about Patches. One day all the wounds look healed, the next they are angry red welts again, and I'm asking Bernie to come catch her. Bernie comes over with the net, but five minutes before he gets there she disappears into her hole. The next day her angry welts are healed again, like magic!

This squirrel has a most incredible spirit. I have a theory about this. All our squirrels that have names seem to survive better. You'd think they don't know they have names, but I think they do, and I think it means something to them. I always immediately call them by name when I see them -- Spunky, Mr. Operator, Tubby, Foxy, Brownie-- and now, Patches. When I call Foxy she runs to me from afar, as does Spunky. When I go to the Orange Tree, Patches appears magically out of nowhere. I think it increases their sense of security, enhances their drive to survive.

After Wednesday's storm we were out there feeding them, but did not see Patches. I'm worried, and wondering if she made it through the storm.
Posted by Admin at 12:15 PM