There arose such a chatter

Today I was feeding the squirrels over by the orange tree in the late afternoon. It's the end of autumn, and the daylight hours have grown steadily shorter, with sunset arriving earlier and earlier, making the window for feeding squirrels shorter and shorter. But today was a turning point. The sun started to set a little bit later  this afternoon, at 4:29pm (EST). For the past three days it had set at 4:28pm. The sun will now set one minute later, as the days progress, until the end of June - beginning of July, when it sets at 8:31pm. It will then do that for a number of days before it starts heading back towards where we are now. But we're over the worst of it today, and we'll be watching it get better and better as sunsets occur later and later over the next seven months.  Something to look forward to! The Winter Solstice will arrive this Thursday December 22, in the wee hour of 12:30 in the morning (EST) - half past midnight. It will be the longest night of the year, and then the days will start getting longer.

While the sun was still shining, I was there feeding my favorite squirrel Alphie, who is now wearing a heavy fur coat. He's still recognizable though, by his four little black feet that contrast so cutely with his dark beige fur like four adorable mittens! I was also pleased that Baby Black Squirrel made an appearance. I hadn't seen him (or her) in quite a long time and was fearing the worst, but there he (or she) was, looking decently healthy, although thin, having no fur coat as of yet. Probably still too young to be able to do that. Black Baby was not quite as scared as in the past, and would actually stick around for a nut, while staying close to the base of the tree, so as  to make a quick getaway if needed. This is typical baby squirrel behavior.

I had just settled down for a long winter's feed, when out on the lawn there arose such a chatter, that I sprang from the bench to see what was the matter. Away to the orange tree I flew like a flash, when, after making my 50 yard dash, I gazed up at the tree... and what to my wondering eyes should appear but a large red tailed hawk exerting its reign of fear! 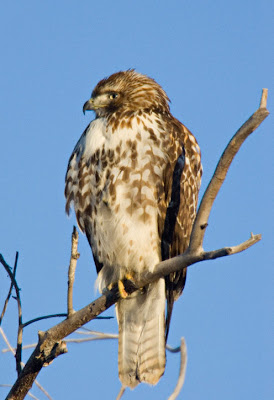 From its high perch, the big hawk was quietly watching the squirrel show below. And the squirrels  were putting on quite a show! Both the hawk and I were staring straight at  a tiny head that was sticking out of the baby hole in the orange tree. Why didn't the squirrel go inside? It was just calling attention to itself by staying there and making such a racket! Was it possible that equipped with its sideways vision, it still could not see the hawk and only sensed its presence? I'm not sure if squirrels even rely on their eyesight and tend to think not, because in the past they have sometimes sensed a hawk way before I noticed it.

I saw how easy it would be for the hawk to swoop down and nab the little fellow at any moment. I called out hysterically: go - go - GO -  go inside the hole! I felt like a cheerleader at a football game! But the squirrel paid me no heed. How could it be so stupid? Nearby was a man and his dog, chatting with a neighbor, and they too paid me no heed. Was I in some alternate reality? Had I perhaps died and gone to hell? Hell is where the hawk is.

But the hawk was also being distracted by the caterwauling emanating from  just beyond, in the cherry blossom orchard, where a group of five squirrels had congregated in one of the smaller trees, making themselves into a veritable hawk banquet. 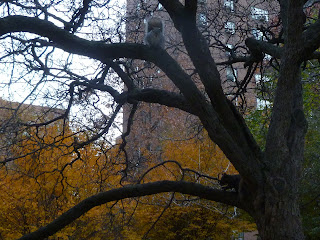 They were holding a concert - and again, all I could think of was how they were attracting the hawk with their suicidal symphony!  I went over and told them in no uncertain terms  to shut the heck up. Did they pay any attention? Nope. By then they were on automatic. People strolled by, but nobody saw anything amiss except me. It was like one of those bad dreams...

I frantically ran to and fro between the orange tree and the cherry blossom tree, hoping that my presence might dissuade mr. hawk from doing anything drastic. Apparently it worked, because suddenly the big bird took flight  and disappeared from the immediate vicinity. What a huge wing span it had!

I breathed a sigh of relief. The squirrels however, kept up their chorus of grief, not seeming to realize that the threat had flown away. Interesting. Was there some type of sensory delay?  I finally left too, after  realizing that they would not be calming down anytime soon. Besides, I didn't want to feed them again.  I was feeling guilty. Unfortunately the act of feeding squirrels draws them out into the open, where they  become a natural attraction for hawks. The thought of a hawk tearing up Alphie or little Black Baby was too much to bear.

I've been wondering about the strange behavior of the squirrels ever since. Why did they not have the sense to run and hide from the hawk? They seemed not only rooted to the spot, but almost to be purposely calling attention to themselves. Why would that be? Was it something instinctual?

I used to think that they were sounding an early warning system for the other squirrels, but now I'm not so sure. I remember hearing a  theory once that a squirrel (or perhaps any prey) will go limp when caught in the talons of a hawk, perhaps following the dictates of Nature to make themselves into an easier meal. I'm wondering if that could be the message of their cacophony: come and get me!