Give Us This Day Our Day-old Bread.

Every once in a while I'll buy a loaf of day-old bread when it's on sale for 99 cents. It's for the pigeons. Last winter I got sensitized to the pigeons when I realized that their cooing sounded more like moaning. Pigeons are people too!

Seriously, I cannot feed all of the pigeons all of the time, but will sometimes  bring some bread along to pacify them if they start interfering with squirrel feedings. I've seen more than one pigeon-squirrel fight where the feathers fly.

Pigeons often try to eat the squirrels' food, peanuts exccpted because they can't get the shell open. They'll often intimidate babies that are much smaller than them. Try feeding  a shelled almond or walnut to a baby and just watch how the pigeon gets there before baby does! I've lost a lot of expensive nuts that way.

I did not however expect the squirrels to crowd around when I was throwing bread to the pigeons. But there they were, glomming onto the pigeons' food.  It turns out that squirrels enjoy a slice of bread, and some will even run off with their "treasure" to be consumed far away, in solitude.

The pigeons like something soft and white like Wonder Bread, and go nuts for something called Potato Bread. The squirrels like it too. I guess it's not such a bad idea to give them a slice now and then. After all, it's enriched" with
vitamins and minerals.  Hey, maybe I'll even serve peanut butter sandwiches one of these days. 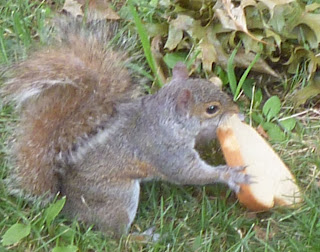 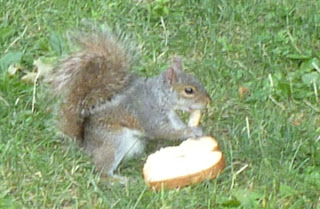 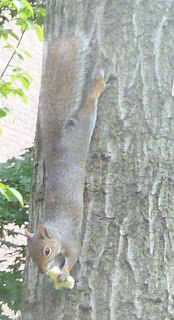 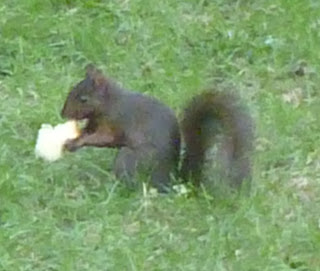 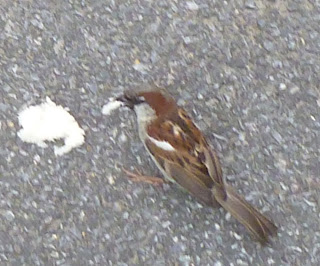