There was cause for great jubilation today when NJ Squirrel was found! Yesterday he'd been allowed to run free around PCV for the first time, and he promptly disappeared into a hedge and did not return. Down the rabbit hole! After hours of searching, his Dad finally gave up and went home, then came back early the next morning, but still no squirrel :(

$200 Squirrel
So this squirrel had a price on his head -- a $200 reward had been posted, and I'm proud and happy to that say I found him! With the help of my "magic cart", that is. I parked it  near the hedges like an ice cream truck, where it started attracting squirrels like a magnet. They don't fear it as a squirrel trap for some reason, and seem even less afraid of it than they are of me! Maybe because of it smells like peanuts? 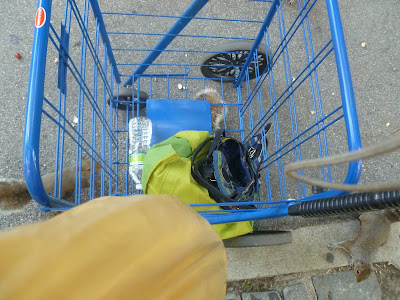 In due time, NJ squirrel showed up, close to the spot he'd disappeared from. He was hungry. He was also jittery, and jumped at the sound of a loud noise. I called Bernie, who came over right away.

After he got home, NJ Squirrel was hungry and tired. He especially wanted some of his favorite formula-- comfort food. Then he curled up nice and comfy next to a chandelier on the ceiling, that provided bright light and heat, and fell fast asleep there -- safe and sound!
Posted by Admin at 8:25 PM