On the day following "The End of the World", I walked around looking for changes to the environment.

Unfortunately I found very little in the way of enhancements, but saw lots more of the dreaded brown stuff I'd been deploring all summer. And smelled that same awful smell!  Am I the only one complaining about that?

I must be a super smeller. I've heard about people who are super tasters and think I may have some form of that too. For example, I have not been able to enjoy most common candy bars since I was about 10 years old. I've enjoyed European candy though, and was told that's because they use higher quality ingredients than American candy manufacturers. I don't know much about that, but the candy does often taste better to me. I recently discovered the Bounty bar for example, which is actually made by Mars, but is mainly sold in Europe and not marketed in the US. I was able to find it at our great little corner store where we buy nuts for the squirrels.  The Bounty bar has delicious chocolate on the outside and equally delicious coconut inside. It comes in dark chocolate or milk, and both are good (I normally don't care for milk chocolate but this tastes good to me).

It's twice the price of a Mounds bar. And worth it! I decided to do a taste test. No comparison. I didn't like the Mounds bar, but started looking forward to getting a daily Bounty bar when I went in to buy peanuts for the squirrels.

Then I discovered Justin's organic chocolate covered peanut butter cup, which was exquisite. And it's made in America! 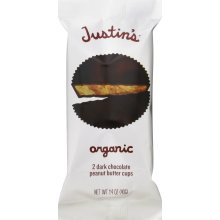 Justin's too comes in dark and milk chocolate and both taste good, although I prefer the dark. Again, I did the taste test: Reese's peanut butter cup was ok, but I didn't crave another, whereas I imediately got hooked on Justin's and it soon became my daily fix. A friend of mine couldn't  understand this, and thinks that both the Mounds bar and Reese's actually taste better! Could he be pulling my leg?

Another example is the macaron. We visited a nearby neighborhood cafe this summer called  Cafe Green, which specializes in macarons. They are a kind of cookie that is expensive but worth the splurge once in a while because they're so delicious. My friend on the other hand thinks they're "nothing special", but then he enjoys those cheap coconut macaroons that you can buy just about anywhere, which I wouldn't bother eating if they were giving them away.

I've had the same "problem" if you can call it that, with ice cream - I only eat Häagen-Dazs. The  other brands seem like a waste of money and calories to me. I've never liked Ben and Jerry's, though most people I know like it. I recently learned that the other ice creams - including Ben and Jerry's - do have fillers, which must be what I taste as a super taster.

Enough about my super tasting eccentricities, and back to the idea of being a super smeller. Autumn has always been my favorites time of year, and I guess it's because of the smell. I look forward to the scent of fall in the air -- what I'd describe as a crisp smell of leaves and apples.
So it's very difficult for me to walk around now in mid-October, smelling the same putrid smell that plagued me all summer long. I'm not optimistic that we'll be seeing much improvement coming out of all that hustle and bustle that was scaring the living daylights out of the squirrels the other day-- instead it appears to be just more of what we saw last summer (ugh). 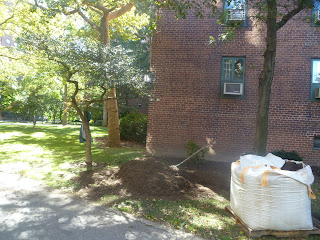 I won't bother you with any more dirty pictures, just this sad one of where the squirrel hedges used to be. They've been cleared out and replaced with a few little bushes.
The squirrels used to love playing and hiding in those hedges, and they provided protection from the wind and snow in winter. 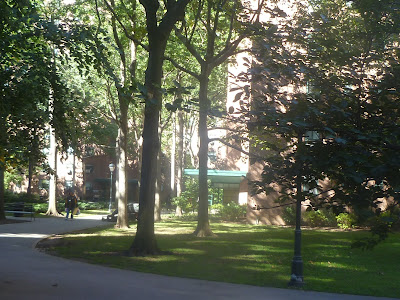 Speaking of which, I'm now looking forward to winter: I doubt they'll be spreading that brown stuff on the snow. But who knows?