A House Is Not a Hole

As I'm feeding squirrels the other day, a passerby calls out: "the holes are their houses!"  This brought to mind one of the dead trees over by the east flagpole in PCV. This winter a bunch of squirrels have been lodging in that hole. A sentry or two constantly stand watch. Whenever I walk by I see at least one little head sticking out of the hole that was made when a branch was lopped off that tree.  One wonders just how deep it is and how many can pile in there, but when I stand underneath and throw some peanuts down, or just even rattle the bag, all  of a sudden so many squirrels come piling out and streaming down the tree! 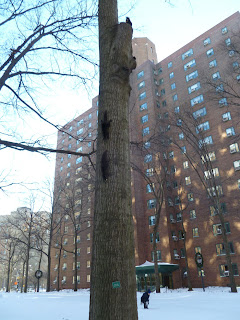 One also wonders how bad it smells in there. I guess it's not the worst place in the world for a squirrel to be wintering in, but I think it's more of a hole than a house.

I remember one winter when somebody put wooden boxes in the trees at Madison Square Park and they made excellent houses that the squirrels took to immediately. The boxes were part of some experiment, and had the perhaps unintended side effect of helping the squirrels!  They were also doing (are still doing?)  something similar for squirrels in Thompkins Square Park. I think PCV should consider doing something for their squirrels.

So far this year we have not had many casualties from the bad weather. I put that down to improved nutrition and improved "food security".  I remember the first year I started feeding squirrels, there were all sorts of unhappy creatures wandering around with wounds. I particularly remember one pretty black squirrel who was really not more than a baby with soft first fur, that had a terrible wound that covered the entire length of one leg, with raw flesh being exposed to the elements. It looked like it hurt like hell.  And it never healed! All winter long I fed it as best I could, but for some reason the leg didn't get better, and I think it must have been a bacterial infection that needed antibiotics. Guess I didn't  know Bernie yet. The squirrel continued on through the winter in spite of its sorry leg, which may have finally healed sometime in the spring, as I could no longer find it.

And the bites! So many of them had these horrid looking bites on their backs that must have come from fellow squirrels that apparently went a bit cabin crazy when packed tightly into holes for any length of time. Often these wounds would fester and would not heal easily.

There were lots of little babies around that year-- babies with no coats at all. Their little bare bodies were pink from lack of fur, probably due to mange. We helped some of them to grow coats by giving them good nutrition, but not all of the little ones survived that winter. One of them that did survive and managed to flourish was the squirrel named Brownie, whose picture is at the top of this blog. He was completely red as a baby, but by springtime when this picture was taken, he was growing black fur on his back.

So that was how I got hooked on this squirrel feeding business- or  actually not a business, but rather a charitable enterprise.  This year our squirrels were all
fairly fat before the bad weather arrived. So except for the littlest skinny ones, whom we have not seen since the blizzard of Dec. 26, they seem to be doing okay. I haven't seen  any of those horrid bites on their backsides yet. I think their feeling of food security makes all the difference in the world. Now if we could only do something about their accomodations!