I guess it had been Thursday since I was last at PCV. I'd planned to go there over the weekend but was rained out. By the time I got there it was Monday, during a lull in the rainfall. The squirrels were going nuts. Apparently the rain had deterred others as well from feeding them. I've never seen such a hungry bunch! When they saw me, polite table manners went out the window. Spunky jumped into one of the bags and started scarfing down a slice of  bread.  Two of the nut bags were grabbed and clawed open, leaving holes in the bottoms. Feathers were flying when pigeons got in the way. And I myself emerged bloodied and scathed. Nothing serious,  just some scratches :D 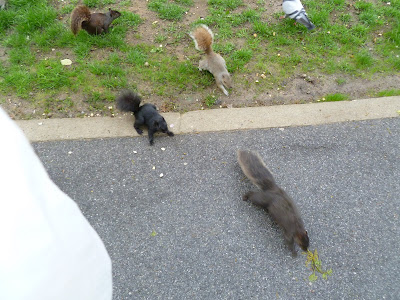 My old foe, the man who really hates me and calls Security whenever he sees me, came by and as usual started yelling at me, saying that there was a $50 fine for feeding squirrels. If so, that's the first I'd heard of it. I wish he'd actually watched me feeding them and notice how desperately hungry they were. This is no luxury, no "let them eat cake" scenario. These squirrels need us. There is not enough food on the PCV grounds to feed all the little monsters. 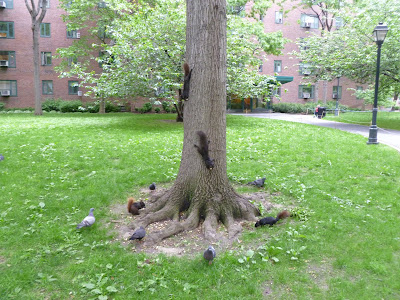