The storm is along the Jersey Shore right now, on its way here. The center is 280 miles from New York City and moving very slowly. This is BIG, roughly about the size of Europe. There is actually a tornado watch here right now until 5am tomorrow. I can hear the wind starting to pick up a little bit now.  Looks like it will really get going 'round midnight - 4pm, and the peak will be between 8am - 11am tomorrow, when it will be slashing through the five boroughs.

I went through PCV earlier today, and there were no squirrels out, even though it wasn't raining. There was only one little gray baby who was digging energetically in the dirt, and ran away when I approached.  I'm wondering if they were already sensing the approach of Irene. I am so worried for all my poor little squirrels. I took a picture of Patches's nest. Will it still be there tomorrow? If it blows down, what if Patches is in there? 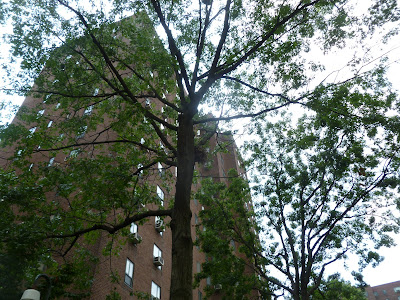 Even the tree itself might fall down. The earth is very soft now due to all the rain we've been having lately, which makes the trees unstable and more likely to fall over. Oh, the beautiful trees of Peter Cooper Village!

Meanwhile, I'm listening to L.A. programming being piped into WBAI 99.5 here in  NYC and it's 110 in the Valley right now. They're havin' a heat wave!

8am - Irene has made landfall in Little Egg and is now barreling towards New York City. It seems like we're in the eye of the storm, as it is very calm with no wind at all blowing, It is raining, and it's high tide now. No sign of flooding here at Waterside, but we're still expecting a storm surge.

I'm hoping Patches is still safe in his nest.

9:00am - Irene has been officially downgraded from a category 1 hurricane to a tropical storm.