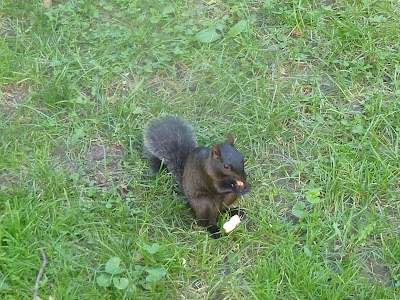 I've known Alphie ever since he first came down the tree -- the "orange tree" where he was born. I watched him take his first look at the universe that awaited him. From the very beginning he was special. He was the most joyful, exhuberant baby squirrel I'd ever seen. He did everything right with never a misstep. I named him Alphie  because I knew he was going to grow up to be an Alpha Squirrel. I even did his baby book: http://thenewyorksquirrel.blogspot.com/2011/11/my-baby-book.html

He started out with brown fur, which then turned red, and has recently turned black.
﻿﻿

Now all grown-up, Alphie has fulfilled his promise. He's as wonderful as he always was, but his favorite sport now seems to be chasing after and charging into other squirrels! Yes, Alphie has become a bit of a bully.  But there is a method to his madness. He wants me all to himself, but beyond that, he wants all the nuts for himself. Here he is being a true alpha squirrel.  He's surrounded by nuts as he enjoys his meal, but  has cleared the area of all other squirrels who dare not come close enough to grab the nuts that surround him! True bliss.
﻿﻿﻿﻿

I've never seen Alphie hurt another squirrel, he just likes to bump into them and send them flying. Until the other day when I thought he went too far. It was the day after Hurricane Sandy and Alphie seemed over-excited to see me. When I saw him lunge into a baby squirrel, causing a great deal of squeaking and squealing, I decided that he needed to learn a lesson.
I remember being bitten once by a neighbor kid, and when his mother found out she bit him to teach him a lesson (I always wondered if he grew up to be a psychopath after that). So I lunged at Alphie! I kicked him a couple of  times, which made him jump sky-high. My foot made contact, not enough to hurt him, but just enough to make him jump (squirrels are very jumpy creatures - they will jump at the mere sound of something rustling). I wanted to make the point that he wouldn't like being tackled himself.
And I yelled at him and wagged my finger in his face while he stared at me, and his eyes switched back and forth furiously as they followed my finger. It was so funny that I had to laugh, but I wondered if he understood any of it. 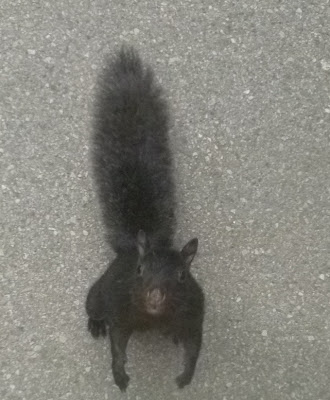 I soon realized that he had, because right after that he slunk away across the "road" and did not come back again. That was most unusual because he'll normally return  again and again, in a tireless pursuit of nuts to bury, well after he's eaten his fill. So he knew he had done something to displease me! But did he make the connection to what it was?

Well the next day he was acting quite out of character. He kept close to me, and hid underneath the cart when eating his peanuts. I wondered why he was acting that way, then after observing him for a while, realized that he was actually restraining himself from pouncing on other squirrels. I think that he gets over-excited in my presence and tries to keep other squirrels away. But today something strange was happening. After a few half-assed attempts to eliminate the competition, he'd retire under the cart.

I decided that Alphie is a genius.  He not only grasped what I'd been trying to get across, but remembered it two days later.  Plus he took corrective action: by staying under the cart he was able to placate me while protecting his position of primacy. Brilliant!  Alphie is an amazing squirrel. But I always knew that, didn't I?

Later on a man who was walking his dog passed by and hissed at me: "Rats with tails! Why do you bother with them? Why do I bother? I smiled and thought of Alphie, who is made of snakes and snails and squirrel tails!