Squirrels tend to come and go. They're often here today and gone tomorrow. It's always a mystery as to where they go, but it's also a mystery when they suddenly appear out of nowhere. There's a new squirrel on the block that looks like Alphie - same size and color, though not quite as pretty - but he looks enough like Alphie to be mistaken for him.
﻿ 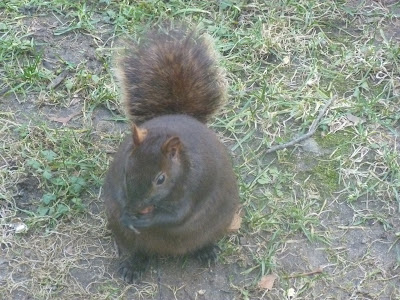 Yesterday I was watching him play a squirrel's game of  dodge ball where he'd cause skirmishes by chasing the other squirrels, ramming into them and bouncing them in the air!

A Tale of Two Tails

Actually he has probably been around for a while, and I think he was causing me to misjudge Alphie as a big bad bully. But since Alphie got his tail scrunched, and this squirrel's tail is perfect, I finally realized that they were different squirrels. And he was likely the cause of  Alphie's damaged tail! Perhaps the noble Alphie had been defending some innocent little ones.