The Rescue of Red Momma

1-20 is the last time I go to PCV before the devastating 9-day cold spell. I notice that Red Momma is looking rather sickly. I'm not sure if she's pregnant but her skin and fur have been going through changes, which is often the case for a pregnant squirrel. 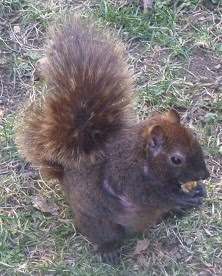 1-29 We finally get a break from the cold. Today it is 52 degrees and sunny. I  go to PCV after a 9 day absence to check on the squirrels. I'm relieved to find Red Momma, who has survived the cold, basking in the sun. 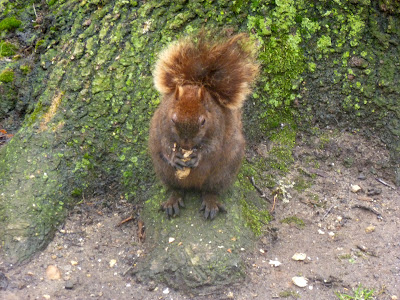 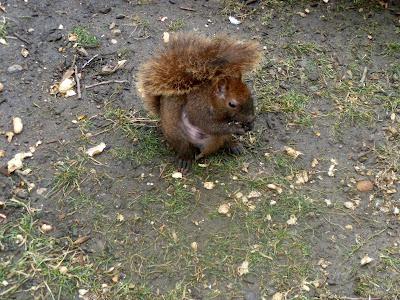 2-6 After yet another cold spell, we go to back PCV to assess the damage.


2-10  Today I'm feeling anxious when I don't see her right away, then I feel a tugging on the back of my coat,  and I turn around and find Red Momma! Why, hullo! 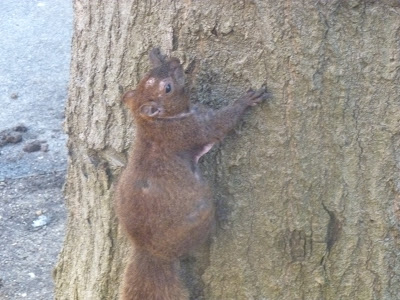 2-16 A curious thing happens today, in which we learn a little bit more about how squirrels operate among themselves. We had spent most of the afternoon over in Spunky's area, feeding and looking for squirrels in trouble. We'e still on the lookout for Bad Paw (looks like my prediction is proving to be sadly true: once a squirrel has been scared by the net you will never see that squirrel again, because another encounter with a human is perceived as being a fate worse than death).

At day's end I finally go over to check on the orange tree squirrels. I wasn't that concerned since Bernie had fed them earlier but I still wanted to see them before I left although it was so late that I figured they'd all be gone by now. To my surprise I find Red Momma sitting in the tree - not the orange tree, but the tree next to it - by herself. All the others have apparently gone inside for the night.

In my conceit, I assumed she's been waiting for me! Of course my ego likes to imagine that I am the center of her universe. Eventually it dawns on me that I may not be quite the reason why she's sitting there. 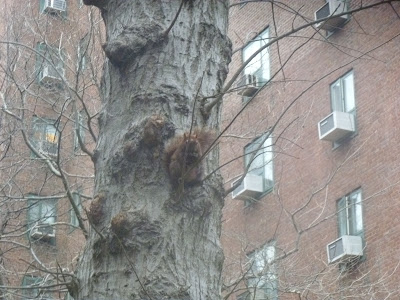 After feeding her, I expect her to leave like she normally does, and that's when  I understand that things are not quite normal. Usually after eating she runs up the orange tree and disappears into the hole. This is one of the reasons why I thought there might be a nest of babies up there. This is where all the cinnamon squirrels have been born, where Alphie was born. If only the tree was transparent-- what I'd give to be able to look inside!

Today she does not go back to her tree but stays there on the branch of the other tree, and I have to admit that it is not my company that she's enjoying. Bernie comes over and the two of us stand there watching her for a while as she does -- well, nothing. 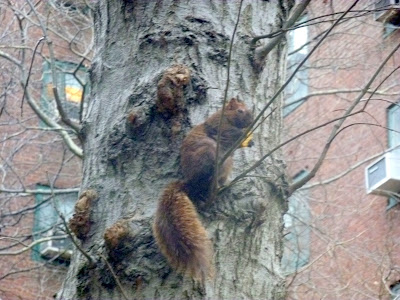 We're starting to get the idea that she can't go home for some reason. None of the other squirrels are around, except for Alphie, who seems to be keeping her company. Such a loyal friend. We decide to stick around for a while to see what happens, maybe even catch her, because we're worried about her, with more cold weather in the forecast for tomorrow.  So we set the trap and wait, while she and Alphie sit in the tree. 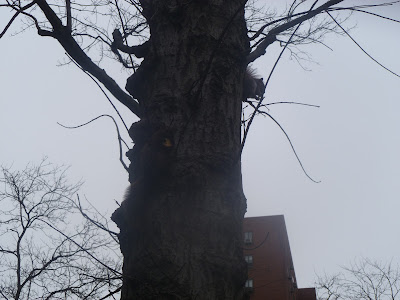 She won't go near the trap, although Alphie goes over to inspect it, eyeing the peanut within. He's not hungry enough to take any risks though. At one point she moves from this tree to the orange tree but does not attempt to go into the hole-- she just sits on a branch half way up the tree. It's getting getting colder and darker and I'm getting tired, but I'm fascinated by what could happen next.

What happens next is that a very large black squirrel I've never seen before comes out of the hole
and chases Red Momma off the tree! WTF?? Who is this BIG BEAR of a squirrel?? Who's been sleeping in HER nest? My theory was right: Red Momma's home had been hijacked! I'm thinking that if her babies are in there, they might be in danger or even dead. She does appear intent on getting back into the hole. She actually tries again, this time going right up to the entrance, but the big black squirrel pops out of the hole and chases her away again. Oh dear, what can we do? This is high drama going on here.

Bernie and I both have things to do, but don't want to leave her yet, so we  decide to take shifts. I stay and watch her while he runs some errands, then when he gets back I go off. Are the two of us nuts? When I get back it's already dark, and no sign of Bernie. Suddenly I hear a commotion  in the tree over by the hedges (or what used to he the hedges before they were cut down). Sounds like a squirrel trying to enter one of the holes in that tree. I walk over, but after a while the ruckus dies down and I assume it ended with a successful entry. Then Bernie reappears from behind the building, where he has been following Red Momma. But he lost sight of her and it's really dark now, so we decide to leave and hope for the best.

It's been fascinating as well as heart-wrenching to watch this little drama. We've seen squirrels trying to get into holes on cold nights before, but this squirrel had been thrown out of her own home!  Plus this involved two of our favorites: Red Momma and Alphie, who seems to be out in the cold as well.

1-18 The next day Bernie goes back and finds Alphie, but does not see Red Momma. Eventually she shows up, walking rather slowly. She survived the night! But what kind of shape is she in? Bernie decides that she needs catching and gets her in his net, then takes her straight to the vet.

The diagnosis: She is exhausted and has multiple problems but should be OK. She has 4 babies and will give birth in 3 - 4 weeks!!
She will have to be kept for a while.

She is treated with antibiotics and a blood test is taken to determine her skin condition, which might be a fungus, they will find out in a few days.  They have to be careful treating her right now because it might harm the babies. In addition to medicine, the vet said she needs rest, warmth, and good nutrition ..... she will be getting that big time. 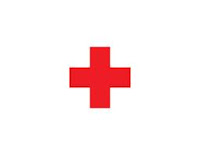 St. Bernard's Infirmary
I like to call Bernie "St. Bernard of the Animals"! He takes Red Momma back to his expanding ménage à quatre infirmary-menagerie, where she is now resting comfortably, if a little nervously."Where am I? What's going on?" She's being fed nourishing food which at first she refused, but Bernie gave her some of his famous Natural Squirrel Formula and she lapped that up. It must taste like a milk shake to her. Now she must realize that she's on squirrel vacation :)

It's full house now, says Bernie: There are two recovering squirrels in the two cages, each with a sleeping box and food.  One of the two greys has her bed next to the cages. They all know about each other and are behaving well. It's warm too.

Speaking of which, the other recovering squirrel, Bad Foot, was brought back to the vet's for a checkup and the healing is going to be a bit more complicted than thought at first, but she won't be losing her foot. Yay!

So along with the sad tales, I'm glad that there are some happy tales to tell as well.

Happy tails to you, until we meet again!
Posted by Admin at 11:20 PM