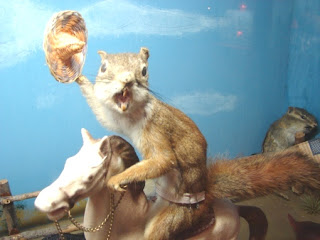 We've been told that they're on their way, and will soon be erupting from beneath the ground, where they have been waiting for 17 years to come out.


A bit of background
There are various different broods, and this one, which is called Brood 2, waits 17 years before it re-emerges in this area of the eastern United States, after which the adults mate and die, and then their progeny return back into the earth to wait for another 17 years before repeating the performance. Why 17? It is unknown, but thought to have to do with synchronization with potential predators, a way of ensuring survival.

They're calling it Swarmageddon
And for a time they will be everywhere, eating, mating and making lots of noise. They will be sucking the juice out of the trees.The ground will be covered with cicada bodies.  And this will last for approximately 6 weeks.

Will the squirrels be affected?
Will there be any food left in the trees for the squirrels? You can see the babies dining on bark and buds these days. Will they have enough to eat once the cicadas come out? Maybe they will develop a taste for cicada. While squirrels are primarily vegan, they do eat insects I'm told.  I've been  reading some conflicting stories. Somebody said that the squirrels will be scarfing down cicadas like corn on the cob! 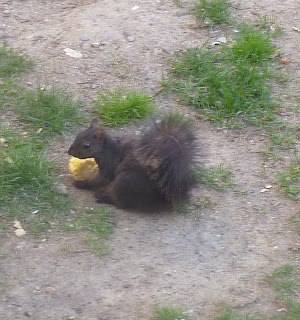 Another site warns against a danger to pets like cats and dogs:

Your Cat Can Choke On a Cicada Leg!

Pets gorge themselves on these creatures, but it turns out, part of the cicada is not only indigestible but potentially harmful.

The Humane Society warns that cicadas’ exoskeletons are not digestible, so eating too many could cause constipation or vomiting. Animals could also choke on cicadas’ legs and wings.The Humane Society also noted that cicadas are like little flying toys to dogs and cats — they’re small (but not too small), they fly slowly and usually stay pretty low to the ground.


Can cicadas hurt?
Cicadas can't bite since they don't have teeth. They suck the sap out of young trees with their straw-like appendages. Someone commenting somewhere insisted that they were being eaten up by cicadas whenever they sat outside. What was probably happening was that the cicadas were mistaking them for trees and trying to suck sap out of them. Yikes! That sounds about as painful as a bite. Hopefully they will not trying  to suck through squirrel fur! Perhaps those squirrels that have holes to live in will be tempted to spend more time inside in the coming days.

Estimated Time of Arrival
So when do we expect the cicadas to get here? Well actually they're already here,  just waiting to surface when the soil warms up to 68 degrees. So far it' s been an unusually cool May (yay!) here in NYC, so they haven't emerged en masse yet, although some reports have already emerged from Staten Island and the Bronx.


Some web sites are tracking them, and you should report seeing or hearing them:


They're actually quite beautiful.
﻿
﻿


When the time comes, The New York Squirrel will be providing on the ground coverage of the cicada storm and its effect on the PCV squirrels.