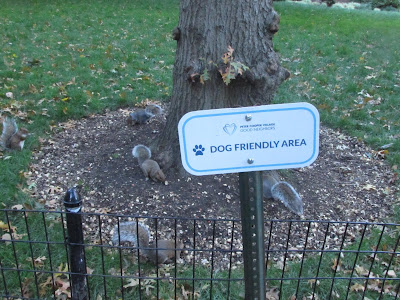 Dog Friendly?
I promise you, this is no dog friendly area! This is where the squirrels congregate and get fed. And it only means that the squirrels get indigestion and we squirrel feeders get to step in it -- all squishy and smelly -- every so often. So why put the sign there? It seems like someone has a slightly sadistic sense of humor. After months of wondering if someone was poisoning the squirrels, all of a sudden there are squirrels galore, squirrels, squirrels everywhere, and you know it's eatin' season. They seemed to pull a disappearing act during the long, hot summer and well into the fall, but once the November winds began to blow they began coming out of the woodwork. They need those calories to generate heat, so they just gotta eat!


The Squirrels and the Honey Locust
This fall saw the glory days of the Honey Locust. There's never been a season quite like this  -- their long brown pods were all over the streets of Manhattan. 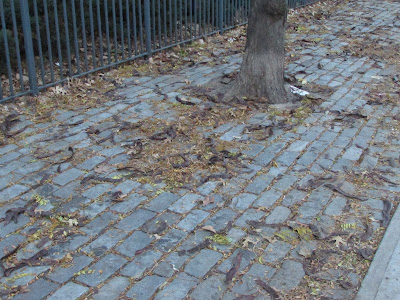 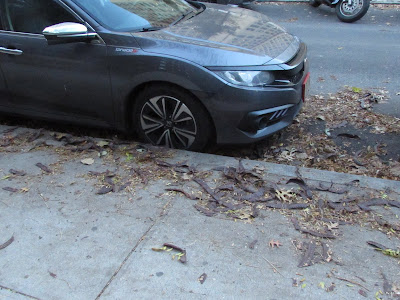 And this was a good thing for the squirrels because it turns out that they eat them! Who knew? Whether done out of desperation or because they taste good, the pod seeds make a nice supplement to the occasional acorns that fall from the few oak trees around here. 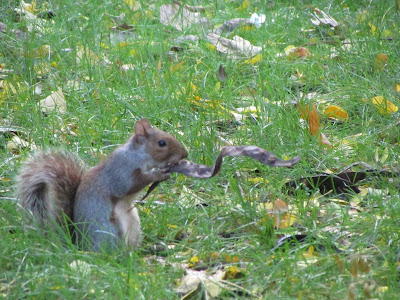 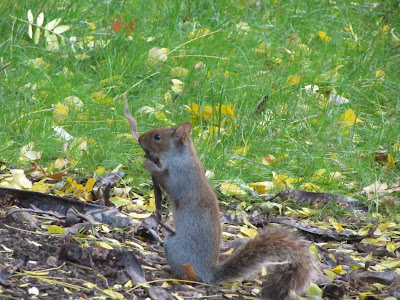 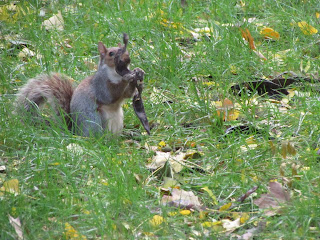 Tangled Up in Brown 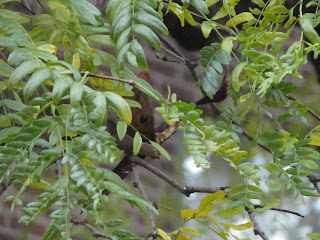 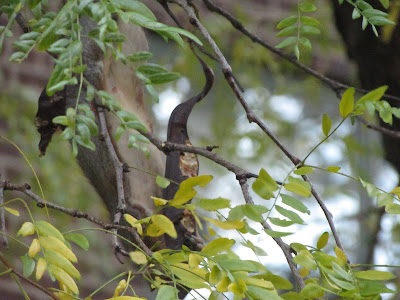 The Squirrel and the Hawk
Okay, hawks have to eat too. And this particular red-tailed hawk was playing a waiting game with a local squirrel who was giving it a loud challenge.  Some squirrels do this for some strange reason, while the rest either freeze or run away. I never fail to be impressed when I see that combination of foolhardiness and courage on display. It does deter the hawks for a while. Normally when a hawk call goes out, the squirrels go into what I call "tableau mode" -- frozen in place -- then most recover and run for cover, But there are always a few that stand their ground and challenge a creature that is twice their size with deadly talons.

It was already getting late when I came upon this standoff going on between a squirrel and a hungry hawk.


﻿
I knew it could be a long game, so I rushed home to get my camera. By the time I got back it was dark enough to cause my automatic flash to fire, and that was enough to send the hawk flying! So I only got a couple of pics of the big bird as it made its exit. 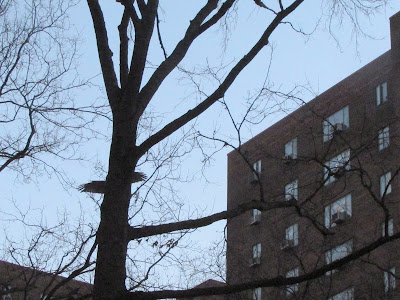 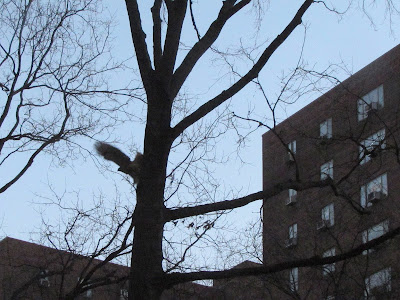 You can see that the brave squirrel is totally intact.


Remains of the Day


Life of a Squirrel
Winter is a sad season for squirrels. They don't have much of a life, and the cold weather is very hard on them. You see open red wounds on the backs and legs of some of them. We haven't had much snow this year, but we did  have some very cold days when the polar vortex got stuck here for a while. I can only imagine what it would be like with day after day, week after week, months of relentless, bone chilling cold, with barely a reprieve.


What's a squirrel worth? Nothing.

The other day I heard a baby crying, This was not a mating cry,  it was a baby's cry. He was sitting up in a tree all alone, cold and hungry, bemoaning his fate. A baby squirrel in distress, and not just any baby, but a very beautiful one -- one of the brownies with the gorgeous red-gold tails. 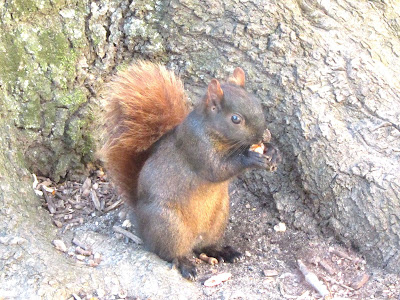 I threw some peanuts on the ground and he finally came down from his solitary perch. It just about broke my heart to hear him cry as if inconsolable, even while he was eating. I tossed him some special nuts -- walnuts, cashews and pecans. I left lots of food, it was all I could do to try to soothe the little guy.


At this age he's still not resigned to the life of a squirrel, and he's making a fuss about it. I wanted to scoop him up and bring him home with me to get warm and comfy -- like all those little pooches you see walking around in their warm little jackets and booties.


But he's a wild thing, and would never have let me do that.