Rain, rain, rain, rain. Rain yesterday and today, rain tonight and tomorrow. We're smack in the middle of a Nor'easter! It poured and galed yesterday and continues today and is forecast to last through the weekend. This is the squirrels' first real taste of winter, and it looks like it's going to be a harsh one. I read in yesterday's paper that a winter of heavy snowfall is being forecast.

And just 2 days ago we were all out there having fun. I was distributing some raw peanuts I picked up in Chinatown, and these were raw, man -- I mean REALLY raw, unlike the ones we get at the Korean deli across the street, which I now think must be somewhat cooked, though they differ from the heavily roasted ones in the "roasted" bin. Most of the squirrels liked them immediately, but a few ignored them and held out for a walnut (I also got some wonderfully fresh walnuts in Chinatown as well as rich, dark chestnuts that are not to be believed). 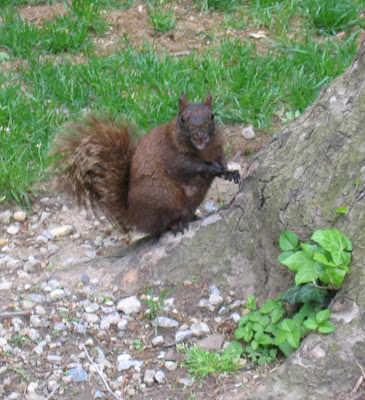 I had fun with Tubby today.
After all squirrels were fed, I was on my way home and was halfway across the park, when I turned around to find that Tubby had been following me! So I sat down on a bench and fed some more squirrels that suddenly materialized "out of thin air". Then I played a game with Tubby, where I would chase her from one end of the bench to the other. She seemed genuinely frightened, and yet if she had been, we know she would have hauled ass out of there. But she stayed -- and she kept running back and forth from one side of the bench to the other! Sort of like being scared by a John Carpenter movie -- scared but you keep on watching :)

Another time I was holding a nut out by the side of a tree for Tubby to grab, but no sign of Tubby. I finally got tired and dropped the nut, and a gray squirrel on the ground ran over to get it, upon which Tubby shot out from behind the tree and pounced! She had been there all along, playing with me :)

It pains me to think that dear Ms. Tubby's out there now shivering in the rainy cold. Bernard Goetz, a squirrel rescuer in the area, did a recent interview in Town and Village, the local paper for Stuyvesant Town and Peter Cooper Village, in which he explained how squirrels can get so cold that they actually freeze to death in the winter. I wish the good people of Stuytown and PCV would take action and do something to help their squirrels get through the winter. Like what? Well... maybe build some squirrel shelters?
Posted by Admin at 2:19 PM