Last winter I went over to Madison Square Park for a ShackBurger at the Shake Shack (best in the city -- one of the few temptations that cause me to fall off the vegetarian bandwagon), and saw squirrels scampering in and out of these great wooden houses up in the trees. 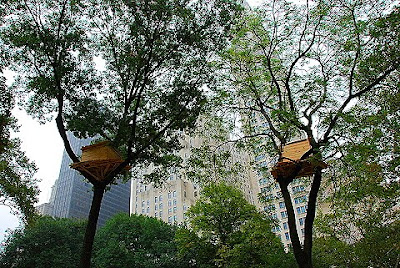 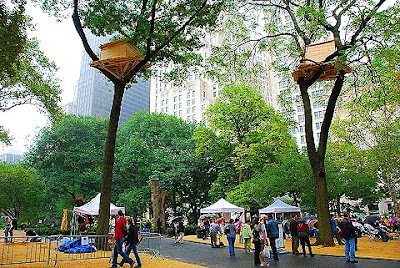 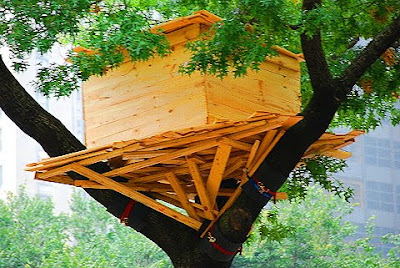 I was told they were some kind of project having nothing to do with squirrels, but the squirrels had soon appropriated them.

I thought to myself, what a fantastic idea it would be to build squirrel houses in all the parks! They would not be as flimsy as nests, and thus would provide greater protection against wind, rain and snow. They'd also be a step up from tree holes. Many squirrels pack together into the holes in trees for heat. These holes are where many winter babies start out their lives, and they often develop fleas or mange from those dark, dank holes. Nature provides, but here's a case where Man can do Nature one better.

Then I found this article. I guess the squirrels were dismayed when their tree homes were taken down:

Artist Installs Tree Houses in Madison Square Park
By Associated Press September 24, 2008
A Manhattan park is getting a dozen tree houses perched high in its trees, courtesy of a Japanese artist known for his site-specific sculptural installations.

Each of the huts, resembling a child's tree house, will be unique — and installed out of the public's reach.

The tree huts represent the artist's interest in how private objects in public spaces change the meaning of both.

Tree Huts is an artist-in-residency program of the Madison Square Park Conservancy. The exhibition opens October 2 and runs through December 31.

Mr. Kawamata's last New York City public installation, "Project on Roosevelt Island," was in 1992. For that artwork, the artist surrounded a derelict smallpox hospital on the island in the East River with a complex web of wood scaffolding.